Educating the consumer to correct misconceptions about hemp will aid growth of the plant in textile applications.

Hemp, one of the earliest known textile fibers, has seen heightened interest and a true resurgence since it was formally legalized, or perhaps relegalized, in the United States with the signing of the Farm Bill Act in 2018. The bill effectively removed industrial hemp from inclusion in the Controlled Substances Act (CSA). The effort to legalize hemp originated in 2014 with several bipartisan legislators initiating a push for the legalization of industrial hemp. Section 7606 was included in the original 2014 Farm Bill, which allowed the creation of state-led pilot programs and sanctioned the investigation of hemp for varied commercial and industrial applications. Kentucky was the first state to institute a hemp pilot program under this new legislation. The 2018 Farm Bill formally made commercial production of hemp legal. The renewed focus on hemp has generated much curiosity and interest, as well as technical studies, real and fake news — not to mention product offerings — and flat-out misinformation passed through various communication channels.

It’s difficult to talk about hemp specifically without acknowledging its more publicized kin, marijuana. To be clear, while both plants are derived from the cannabis family, hemp is not marijuana. Marijuana is generally thought of singularly as a drug; while hemp has been used for centuries in a variety of ways and uses including foodstuffs, oils, rope, household and industrial textile products, as well as for homeopathic or medicinal purposes. Technically, the two primary differences between hemp and marijuana center around the respective amounts of two specific cannabinoids, delta-9 tetrahydrocannabinol (THC) and cannabidiol (CBD) that each plant contains. THC is the chemical component in cannabis plants that can create mind-altering effects and get one “high.”

As part of the Farm Bill Act of 2018, it was determined that marijuana be specifically defined as having a THC content level greater than 0.3 percent. This definition kept marijuana on the controlled substances list. Conversely, the THC level of hemp is almost always significantly less than 0.3 percent so it was removed from the controlled substances list — Of note: CBD must also contain less than 0.3-percent THC in order for it to be legally sold. So, using the simplest of differentiators, marijuana will get you “high,” hemp will not.

CBD is a non-toxic chemical substance produced by the hemp plant that has been used and proclaimed by multiple cultures going back to ancient times as a dietary supplement with medicinal and healing properties. These beliefs continued into the modern era, but by the end of World War II and with the advent of modern medicines, misinformation and negative perceptions towards cannabis plants in general grew. The result of this misperception made it illegal to cultivate marijuana and hemp.

The Marijuana Tax Act of 1937 effectively killed the hemp industry except for a brief respite during World War II where hemp growth was encouraged to produce rope in support of the war efforts. Ultimately, hemp’s use was greatly diminished in the United States until new research and a changing social climate in the 1990s led to some states legalizing the use of cannabis in treating certain medical conditions. Since then, research into CBD, hemp extract and other derivatives, including as a sustainable textile fiber and input, have grown substantially reigniting hemp’s interest and acceptance.

While hemp’s CBD content has been the primary driver in its recent resurgence, interest in its use as a textile fiber also still persists. Historically, hemp may be one of the earliest, if not the first sustainable industrial performance driven fibrous raw material used in the production of textile products. And ironically, it’s long and checkered history with numerous highs and lows in many ways mirrors the highs and lows and resurrection of the textiles industry both in the United States and globally. There is evidence of hemp fiber being used to improve pottery as far back as 10,000 years ago, and it potentially was one of the first known agricultural crops. Some of the earliest uses of hemp as a fiber for textiles can be found dating back to 4,000 BC in China and Turkestan making its initial use in textiles roughly 1,000 years earlier than that of cotton.

According to Kent Masterson Brown, a Kentucky historian and award-winning producer of several documentaries on American history: “The first planting of a hemp crop in the United States is believed to have been in the 1600s at Jamestown in Virginia from hemp seeds brought over by European settlers; who it should be noted, arrived aboard sailing ships rigged with sails and rope made from hemp. Hemp was introduced to Kentucky in the late 1700s where it was found to grow well, becoming one of Kentucky’s largest cash crops.”

Brown should know as he currently is raising the funds required to produce a new documentary film detailing the history of hemp in the United States. The documentary’s working title is “The Seed and Fiber of Wealth” and will tell the story of hemp’s growth in the United States from the original settlers through the early 1900s, the perceived negativity and demise associated with cannabis during the mid and later 1900s and hemp’s present day rebirth.

“History told correctly helps people warm to things and see them up front and personal,” Brown said. “I’m hoping that this documentary will help people to understand hemp’s history and that it is truly a sustainable plant of the future.” 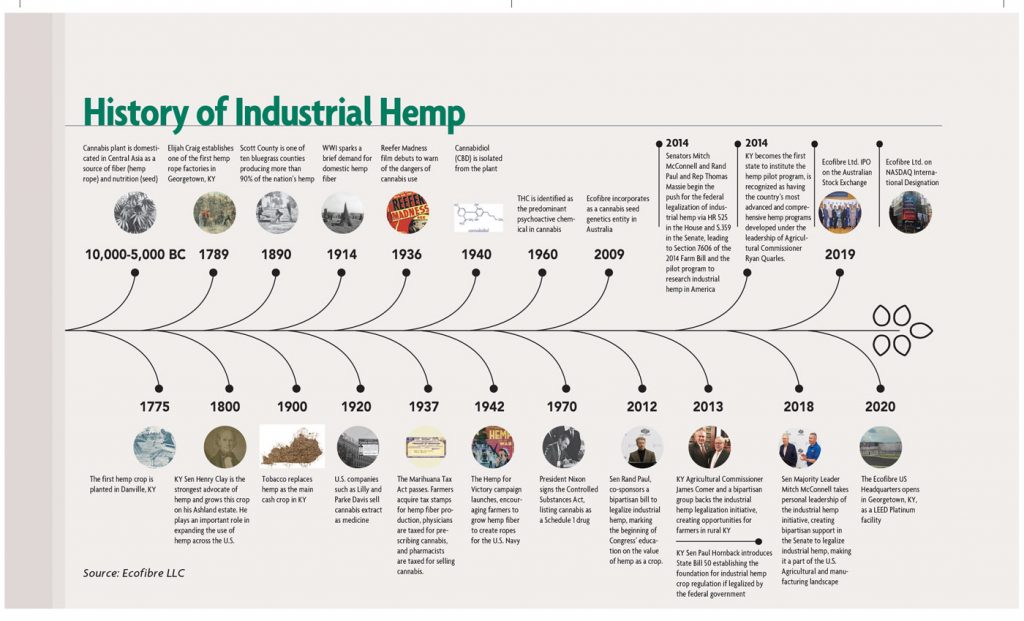 As the U.S. welcomed in the 19th century, hemp found consistent increased growth as a textile fiber, where it was made into products including rope, sailcloth, clothing, paper and linens. “Hemp was a crop that governments generally wanted to flourish because of its increasingly vital use in military applications, especially for naval needs because of its natural resistance to rot and mildew,” Brown offered. And keep in mind that in the 19th century, naval ships meant sailing ships with large sails and intricate rope riggings. For example, the USS Constitution — the famous naval sailing vessel also known as Old Ironsides — “carried over 130,000 pounds of hemp rope on it in addition to roughly 30,000 pounds of hemp sail cloth,” Brown noted. “That’s over 160,000 pounds of hemp on just one vessel.”

Hemp is one of the strongest of available natural fibers for textile processing. It is significantly stronger and more durable than cotton and provides better ultraviolet (UV) protection than other natural fiber-based fabrics. Hemp also checks off virtually all of the boxes required to be considered sustainable. It is naturally hypoallergenic, antiviral, antibacterial and antimicrobial, which also is beneficial to farmers because it can be grown in a more ecofriendly environment with greatly reduced needs for fertilizers and pesticides. It requires less water to grow than cotton and is generally acknowledged as being regenerative of the soil leaving it in better condition than cotton growth. As a result, farmers are able to rotate crops more effectively with hemp plantings.

According to Brown: “Hemp is an annual plant that has become acclimated to and continues to grow well in Kentucky, likely due to the soil’s limestone content. With hemp’s recent legalization, it has again become a leading crop for many of the local farmers.”

Because of the different application needs of hemp plants, farmers have bred the plant into different strains based on intended applications. For fibrous applications, mostly in traditional textile configurations, a hemp strain has been genetically modified to produce taller plants with lengthy fibrous stalks and fewer leaves or flowers. Because CBD extract and oils are mostly derived from the hemp flowers, these plants have been genetically modified to grow with very little stalk, less fibrous material, and a much shorter growing height — but with an abundance of flowering buds, which is then harvested in a similar manner to tobacco. For the hemp strains, the goal is to maximize the consistency of resultant hemp products or derivatives from one grow year to the next. Farmers then will harvest and process the hemp plant, separating the fiber and stalk from the flower and selling the resultant components to various customers.

Applications for hemp and its by-products also continue to grow as there is more and more interest in bio-friendly, sustainable consumer and industrial products. Hemp fiber now is used, reconsidered and/or developed for numerous textile applications in nonwovens, wovens and knit configurations where its inherent natural physical properties show exceptional promise. Research also is evaluating hemp for fiber reinforcement in new composite applications where the sustainability, fiber strength, elongation and potential cost benefits are intriguing. The CBD oil, full spectrum hemp extract, pure extract from the hemp plant, and other hemp derivatives continue to inspire all kinds of opportunities in homeopathic and medicinal applications as well (See “Hemp Black: Unique Technologies Derived From A Unique Input,” TW, this issue). This, in addition to a variety of innovative possibilities under development or still a thought in the back of someone’s brain, and the future for hemp is indeed very bright.

However, proper education of the consumer remains a big challenge and focus of the hemp industry. According to Eric Wang, managing director of Ecofibre, an Australia-based industrial hemp company focused on the development and manufacture of hemp derived products: “Our current challenge is the real versus fake products in the marketplace and the perceptions or misperceptions they can create. Real is science-based, fake is those making a quick buck off of some version of CBD. There remains lots of misinformation about hemp that creates a bad name that is really not deserved. CBD products can indeed help people. They’re proven, healthy and present a real alternative to big pharma. It’s our job to make the best hemp derived products we can and educate our customer base that the benefits of the hemp plant and its derivatives are real.”