The American Floorcovering Alliance (AFA) recent hosted FloorTek 2019 at the Dalton Convention Center, Dalton, Ga. The exhibition featured 80 exhibitors with the addition of several new programs to the satisfaction of exhibitors and visitors alike.

Zach Monroe of Card-Monroe Corp. called FloorTek 2019 the “best yet,” saying, “It’s really good to see that, as we invest in the show, they invest back.”

His sentiments were echoed by Eltex U.S. Inc.’s President Jonathan Bell. “My overall impression was that FloorTek was a very well run show and seemed to be better attended this year than the last several shows,” Bell said. Eltex was showcasing its new sensor for tufting machines, the COMPACT II, which was first shown at the recent ITMA show in Barcelona.

Future Connections was added to the FloorTek agenda as a way to network local, future talent with opportunities in the floorcovering industry.

“Dr. Tremaine Powell, dean of Engineering and Information Technologies at Chattanooga State Community College, both staffed the Chatt State booth at FloorTek and participated in the Future Connections event,” AFA reported. “Some of his students participated, but Powell and other education professions who attended intend to make FloorTek’s Future Connections networking event a part of the curriculum for next year’s classes.” 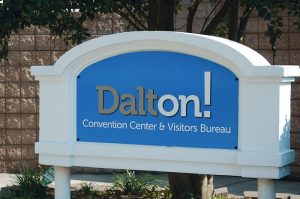 The AFA announced at the exhibition’s conclusion that because of the success of the event, and a high satisfaction rating among exhibitors, it intends to make FloorTek an annual staple as opposed to holding the exhibition every other year.

The AFA defines itself as a “not for profit association created to promote and market the flooring industry.” It was mission success at this year’s FloorTek 2019 exhibition.