At the 13th annual NCTO meeting, outgoing Chairman Jeff Price painted a picture of the U.S. textile industry, and the association’s achievements and upcoming goals.

The U.S. textile industry is on sound footing. Between 1995 and 2009, the industry suffered through a historic and heartbreaking contraction that impacted countless workers and communities. The last six years, however, have been different. Emerging from the depths of a severe national recession, the U.S. textile sector has rebounded. Now, the challenge is both to sustain this impressive recovery and to find viable ways to generate a new era of growth.

In 2015, the value of U.S. man-made fiber and filament, textile, and apparel shipments totaled an estimated $76 billion. This is an increase of almost 14 percent since 2009.

The breakdown of 2015 shipments by industry sector is as follows: 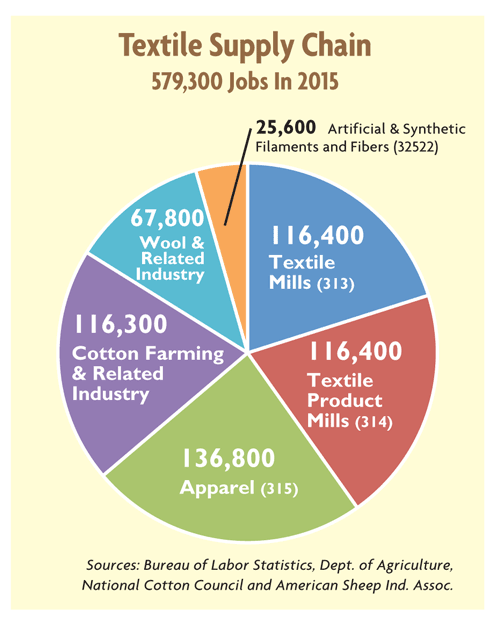 A look back to employment data from 2009 onward further illustrates that precipitous job losses have virtually stopped. Today, job gains and losses likely are the result of normal business cycles, new investment, or productivity increases instead of being tied to the massive loss of market share as was the case in the 1995-2008 timeframe.

Since 2009, U.S. exports of fiber, yarns, fabrics, made-ups, and apparel are up 38 percent, reaching almost $27.8 billion in 2015. In particular, the U.S. has a strong export position in fiber, yarns, and fabrics. Exports of those products totaled $21.6 billion alone in 2015, making America the fourth largest exporter of fiber and textile products in the world. 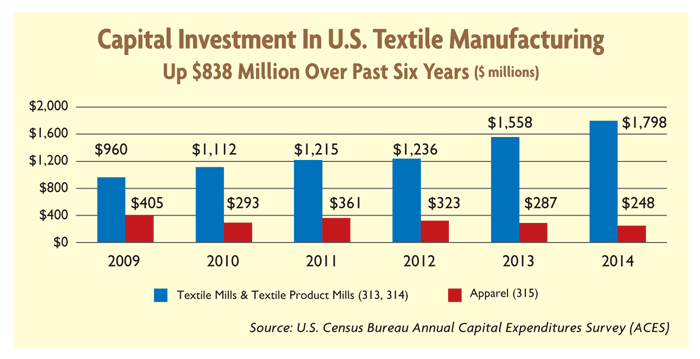 Investment in Textile Mills and Textile Product Mills has seen especially explosive growth, climbing from $960 million in 2009 to $1.8 billion in 2014 — an increase of 87 percent. In contrast, capital investment in Apparel is down $157 million, a decrease of 39 percent.

Finally, the index calculating change in Industrial Production demonstrates that the textile industry is no longer a negative outlier within the U.S. manufacturing sector.

Since 2009, industrial production is:

Wrapping up the numbers, the fundamentals for the industry are sound. That does not mean, however, that the industry is free of challenges. The sector has begun to see changes in demand as the global economy struggles to grow. Downturns in the business cycle are natural to every manufacturing sector, and specific strategies are needed for weathering difficult market conditions. 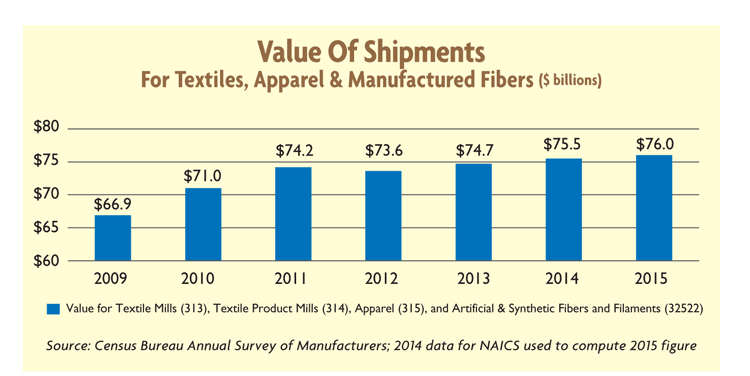 Moving on to policy, the textile sector is unique because changes in trade policy often can affect business with serious, unpredictable consequences. It is for this reason that the textile industry, and certainly NCTO, must engage in the Washington policy-making process; otherwise there is no working relationship with those who are shaping the government’s position on trade.

The most important policy challenge to confront the industry over the past 20 years is the Trans-Pacific Partnership (TPP) free trade agreement (FTA). Due to the inclusion of Vietnam with its state-run economy, TPP holds the potential to negatively impact the existing U.S. and Western Hemisphere textile and apparel production chain.

Thanks to the efforts of many NCTO members, NCTO staff, fellow textile-related trade associations, and supporters on Capitol Hill, the industry’s goals were sufficiently met in the final document, which includes:

Accordingly, after carefully studying the finalized agreement, NCTO endorsed TPP in January of this year. This endorsement, however, did not come without a full weighing of the various shortcomings and tradeoffs that were included in the final text.

There were a number of legitimate concerns. Most notable was the inclusion of a short supply list that waived yarn-forward mandates for nearly 190 items. NCTO has since communicated its displeasure with certain aspects of the agreement to the Obama administration and Congress so as to lay a foundation to prevent a repetition of these objectionable provisions in future agreements. With that said, no trade agreement is perfect; but in this instance, U.S. negotiators struck a balanced deal that met NCTO’s key objectives.

Beyond the TPP, the United States is ramping up efforts to reach a free trade agreement with the European Union (EU), known as the Transatlantic Trade and Investment Partnership (T-TIP).

While these negotiations have moved at a slower pace than that of the TPP, T-TIP talks are accelerating and that comes with two challenges for the industry:

NCTO is engaging the U.S. government proactively to resolve differences with the EU over textile origin rules. This part of the negotiation will be very complex, but the council feels a reasonable solution can be reached.

At the same time, the U.S. textile sector has drawn a hard line on defense procurement. U.S. military purchases must continue to be governed by the Berry Amendment. No deal with the EU or any other set of nations is worth diluting the domestic sourcing mandates in the defense procurement code.

As T-TIP negotiations proceed, NCTO will continue to work to make sure policy makers understand the council’s positions on rules of origin, the Berry Amendment and other key elements of the agreement.

Tariff Preference Levels (TPLs) are an exception to yarn forward rules that have been included in a number of FTAs.

NCTO opposes TPLs because they allow FTA countries to export finished apparel and home furnishings duty free to the United States, despite the fact that these products contain yarn and fabric from third parties such as China and Pakistan.

Two such TPLs have expired and another is scheduled to sunset this summer. They are:

Despite an aggressive lobbying effort on the part of various foreign governments, importers, brands and retailers, Congress sided with NCTO and allowed these TPLs to sunset. Undeterred by their defeat, TPL proponents continue to press for renewals. As such, NCTO will keep working diligently to make sure these harmful loopholes are not reopened.

While noting these industry victories, NCTO is mindful that at least one vexing legislative problem is still in need of a solution.

For several years, the Miscellaneous Tariff Bill (MTB) has languished in Congress. Lack of action has hurt the U.S. textile sector because MTBs reduce duties on imports of inputs that are not produced in the United States.

The good news is that there appears to be a breakthrough on this issue. It is NCTO’s understanding that the House Ways and Means committee and House Leadership are intent on moving legislation that would allow the MTB process to move forward.

The industry’s Washington lobbying and advocacy efforts in other trade areas also directly benefited the bottom line of NCTO members. Those activities included:

Beyond trade matters, several government procurement issues have arisen in the last year.

First, the U.S. textile industry rallied to defeat an attack on the Berry Amendment. Opponents tried to weaken Berry by raising the contract threshold. Intense industry lobbying efforts were successful in striking language in the FY16 National Defense Authorization Act (NDAA) that would have increased the threshold from $150,000 to $500,000. This victory is a tangible example of how NCTO’s efforts in Washington directly benefit the bottom lines of its members.

NCTO also welcomed two more audits — for a total of three — by the Department of Defense (DoD) Inspector General that assessed DoD’s compliance with the Berry Amendment. A law requiring these audits was enacted as part of the FY14 NDAA. It would not be on the books were it not for the lobbying efforts of the Berry Amendment Textile Coalition of which NCTO is an active member.

After analyzing the three audits now in hand, NCTO believes that more training of contracting officers would improve DoD’s compliance with Berry.

NCTO also has been aiding the Department of Commerce’s Bureau of Industry and Security as it studies the U.S. textile industry, especially as it relates to the ability to supply product under the Berry Amendment.

The RFT-MII is part of President Obama’s National Network of Manufacturing Innovation Initiative (NNMI). It is slated to receive roughly $320 million in funding — $75 million from the DoD, and the rest coming in money and in-kind contributions from the private sector.

NCTO spent 2014 and the spring of 2015 working to ensure that textiles would win an open competition against other industrial sectors to be picked for an innovation institute. From April 2015 onwards, NCTO provided advice to the DoD at their request about how to help launch the RFT-MII and about how to educate industry on how to participate.

NCTO is both excited and confident that the RFT-MII will spur innovation in fiber formation and textile science by more effectively encouraging collaboration among the industry’s brightest minds.

NCTO must acknowledge that there are well-funded interest groups whose agendas do not always coincide with the council’s agenda.

Spending in 2013 by these groups dwarfs the $1.9 million budget recently approved by NCTO’s Board of Directors. Such spending includes:

The contrast of 2015 lobbying expenditures are even more pronounced:

Noting this sizeable financial disadvantage, it is imperative to keep growing NCTO. Please help the organization by identifying companies that should join its membership. Moreover, NCTO also needs a continued focus on its Washington agenda if the textile industry is to enjoy continued policy success.

NCTO is leading a special public relations effort to help level the playing field for the textile industry.

This past May, NCTO engaged the public relations firm of Wray Ward to develop and execute an industry rebranding initiative. The council has been joined in this important campaign by several industry partners. Financial contributors include:

NCTO is grateful for their support because the time is long overdue for our industry to take charge of how we are viewed by policy makers, the news media and the public at large.

The council simply cannot allow parties that oppose the industry’s policy agenda to perpetuate the false notion that the industry is antiquated and noncompetitive.

Instead, it is NCTO’s responsibility to help paint a picture for opinion leaders and consumers that establishes a baseline appreciation for the industry as a major employer, investor, innovator, producer, exporter and competitor in the global marketplace.

The campaign’s theme is, “American Textiles: We Make Amazing.” It encapsulates the industry’s amazing cutting-edge technologies, amazing products, amazing contribution to the U.S. economy, amazing impact on national defense, and most of all, the amazing associates who make this happen every day.

Suffice it to say, there is a lot of hard work ahead, but the industry has much at stake in changing outdated and false perceptions.

While last year was one of the most productive in NCTO’s history, challenges still are on the horizon.

Whether it be a soft global economy, the prospect of implementing the most important trade agreement in two decades, or committing to the goal of becoming a better industry tomorrow than the one of today, complacency is not an option.

In Washington, it is incumbent upon NCTO to engage federal policy makers routinely and substantively on the many issues that directly impact sales, investments, and workers because if the council doesn’t, it will cost the U.S. textile industry revenue, markets, output, and eventually jobs.

As for what the industry wants from the government, NCTO simply asks for a stable and logical policy environment that recognizes the value of the textile sector and its workforce. Doing so will allow this great industry to continue to grow, employ, invest, and improve America’s standard of living and quality of life.

In terms of how the industry is perceived inside and outside the Washington Beltway, it certainly cannot allow others to speak for its interests or to define its image. That is why the industry must be its own best advocate. Stay involved or get involved and support NCTO to the greatest degree possible.