Since ITMA 2003 in Birmingham, United Kingdom, there have been a lot of discussions within the
global textile industry, and among Western European machinery suppliers in particular, about
whether an ITMA in Europe still makes sense. It seems these discussions are over now. Reflecting on
the recent ITMA Europe in Barcelona, Spain, one can say this event is still the top performance
show for high-quality machinery, especially for nonwovens and technical textiles production.


It took quite a while to convince officials from ITMA owner CEMATEX (European Committee of
Textile Machinery Manufacturers) that nonwovens machinery is not a part of spinning equipment in
spite of the cards, which to some extent apply the same technology. Since ITMA 1999 in Paris,
nonwovens has had its own nomenclature in the ITMA catalog. And with its steady growth, this
important sector is today one, if not the, cornerstone of the Western textile industry. On top of
that, other fabric production machinery, such as that for woven and warp-knitted technical
textiles, is classified in the catalog in a much better way.

Even one decade ago, the nonwovens sector was rather a mass market. Those days are gone
forever, at least for durable and custom-made products. Today, there are two different nonwovens
manufacturing sectors: disposables including products such as feminine care products, wipes and
other one-use items; and tailor-made nonwovens, which are becoming more and more a specialized
niche market with a growing demand.

That’s one reason why high-quality nonwovens machinery is still produced mainly in Western
Europe, and particularly in Germany and France. There are companies such as Andritz Küsters GmbH,
Germany; NSC nonwoven (now Andritz Asselin-Thibeau), France; Trützschler Nonwovens GmbH, Germany;
and Andritz Perfojet, France, just to name a few — but also France-based Laroche S.A. with its
recycling equipment, which today is an important part of the nonwovens business.

DiloGroup, Germany, was the only ITMA exhibitor to present a complete nonwovens production
line, on which it ran fiber to show a number of newly developed characteristics. According to
DiloGroup Chairman Johann-Philipp Dilo, this line attracted some 3,500 visitors to the company’s
1,000-square-meter booth. 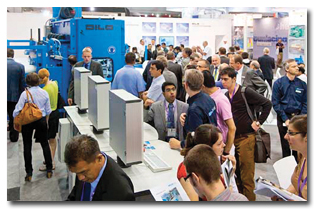 DiloGroup presented a complete nonwovens production line in its booth and ran fiber on it
to show a number of newly developed characteristics.

Top products were the new Alphamix as well as suction, filtration and sound insulation
techniques from DiloTemafa; MultiFeed and MultiCard from DiloSpinnbau; and the Webguide of the
DiloLayer as well as the Isomation Process to produce a more consistent fiber mass flow and a more
even end product.

Of course, one must not forget weaving and warp knitting machines for technical textiles —
with labels such as Dornier, Karl Mayer and Sultex. The Sultex P7300HP projectile weaving machine
still plays a prominent role for technical textiles as well as polypropylene ribbons. All these and
other companies prominently exhibited their top products. Many confirmed that only at ITMA in
Europe would they show the high end of their production lines. For Asian fairs, the products
exhibited are mainly produced at their Far Eastern production sites. 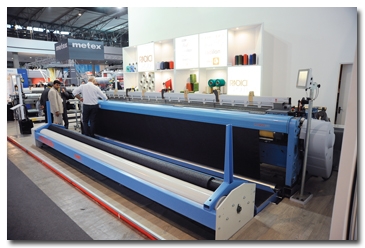 The Sultex P7300HP produces fabrics of high quality, from all raw materials and for all
applications, as well as fabrics made of polypropylene ribbons.

Europe In The Foreground


Visitors for nonwovens and technical textiles came mainly from Western Europe and North and
Latin America. Visitors from India, Pakistan, Bangladesh, Turkey and the Middle East mainly were
looking at traditional textile manufacturing machinery. China was absent, which is no surprise
considering there are a lot of domestic events in China — in particular, ITMA Asia + CITME next
June in Shanghai.

The importance of European markets for technical fabrics and nonwovens is a fact. Marc
Wolpers, sales director, nonwovens, Trützschler Nonwovens, said his company is enjoying very good
business in Europe, particularly in the fields of filtration, automotive and hygiene products. It
is very difficult to get firm facts and figures for European nonwovens and industrial fabric
production, but experts say that today, some 40-plus percent of all textile articles produced in
Europe are made of woven fabrics and nonwovens.

However, Asia Is Keeping Up


On the other side, Wolpers mentioned, “China, India and Indonesia are becoming more and more
important also for the nonwovens industry. Further industrialization, rising standards of living as
well as improvement in infrastructure will support further growth in the next few years.”


Most of the exhibitors were very pleased with visitor quality and level. “The quality of the
visitors was excellent; we have been busy every day and were able to fulfill our entire goals for
the show and are very satisfied with ITMA 2011,” Wolpers said.

Tr&uuml;tzschler Nonwovens presented two new machines: the Streamliner drum dryer with improved
air flow distribution and higher drying capacity with lower energy consumption; and the Erko
EKLB439 crosslapper with improved material guidance for enhanced web qualities at speeds greater
than 160 meters per minute. “At the same time, we have been able to reduce the energy consumption
of the crosslapper drastically,” Wolpers added. Both machines received excellent feedback from the
industry, and Wolpers is sure these products will be top sellers for Trützschler Nonwovens in the
future. 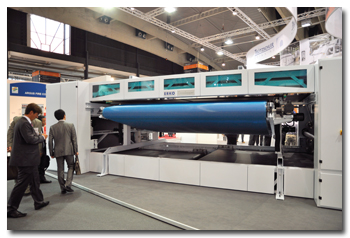 It seems the nonwovens industry is not that jeopardized by the current financial turmoil.
Furthermore, Wolpers added, “We don’t see any slowdown in order income or requests for new quotes.
We feel well-positioned because we can offer all major staple-fiber-based web forming and bonding
technologies. Therefore, we are not dependent on certain product markets. We can fulfill most
requirements of our customers from our portfolio, which certainly helps to continue our growth. In
addition, we can offer know-how from staple fiber production to the final product. This will help
us to support our customers even more in developing new products.”


The manufacture of machinery for technical textiles and particularly nonwovens production
requires a certain company infrastructure and size. Until recently, there were many more players in
this sector. As seen in the past few months and at ITMA in Barcelona, there is an ongoing
concentration in these markets. One big issue was the takeover of NSC nonwoven by the Andritz
Group. Andritz had already acquired Perfojet from Switzerland-based Rieter Group some months
earlier.

Another astonishing move was the acquisition of Autefa Solutions  by the China Hi-Tech
Group Co. Ltd. (CHTC). CHTC’s target is to become a number-one player in the nonwovens business to
manufacture complete lines for spunbonds, spunlace, needlepunching, through-air thermal bonding,
hot-calendering, melt-blowing and composite material.

That’s quite a challenge for the established suppliers. Wolpers mentioned that “the group
formation in our industry seems to be finalized with the acquisition of NSC by Andritz and the
Oerlikon Carding Unit [Autefa Solutions] by the China Hi-Tech Group. This will help us to position
ourselves even more strongly as a family-owned company that is a technology leader.”


None of the companies mentioned sees any real difficulties with the actual market situation.
Most of the order books are full, and the only problem is delivery time. For the future, there is
no trouble, either. Comments were unanimous that nonwovens and technical textiles are cornerstones
of the future for the Western textile and textile machinery industries.

One thing is certain: The markets for these products and the man-made fibers markets —
particularly, filaments — will further grow. In contrast to the traditional textile industry, the
nonwovens and technical textiles sectors comprise strictly innovative businesses and solution
providers. And there is no sign that fewer solutions will be needed in the future.

And yes, in spite of all rumors in the markets and the ongoing discussions about the
frequency of the ITMAs, everybody will attend ITMA Asia 2012 in Shanghai as well as ITMA 2015 in
Milan.

Carbios, On, Patagonia, PUMA And Salomon Team Up To Advance Circularity In The Textile...