U
nifi Inc. opened for business as a manufacturer of textured polyester yarn in 1971,
setting up headquarters in Greensboro, N.C., and a manufacturing plant in Yadkinville, N.C. Over
time, the company became one of the world’s largest textured yarn makers as it expanded its
operations and fiber offerings; established new markets and subsidiaries abroad; and developed a
portfolio of branded, premium value-added (PVA) products that offer a range of performance and
other benefits.

The turn of the millennium brought challenges, including the ever more globalized market and
competition from textile makers in low-cost countries. Such challenges caused U.S. textile
manufacturers to shed hundreds of thousands of jobs, shutter domestic operations and look abroad
for less costly manufacturing or sourcing opportunities. Unifi suffered along with most other U.S.
textile manufacturers, and saw its profits disappear despite all efforts to stay competitive. In
2007, its Board of Directors put in place a new management team, headed by current President and
CEO William L. Jasper, to bring a fresh perspective to meeting the challenges; and Unifi’s fortunes
began to improve. For the fiscal year end June 27, 2010, the company recorded its first annual
profit in 10 years, and now appears to be set on a path to continuing profitability. 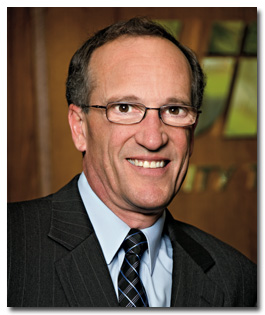 
Textile World
recently talked with Jasper about Unifi’s history, turnaround and future plans, and
presents his comments below:


TW
:
What was Unifi’s initial focus, and how did it change over the years?

Jasper: Unifi was started by Allen Mebane, and it grew very quickly, primarily as
a manufacturer of polyester textured yarns. Allen’s philosophy was that if you make the best
quality of yarn at the lowest cost, you’ll always have a market, and this approach proved to be
very successful for Unifi. Unifi continued this philosophy from the early ’70s through the late
’90s. During the first 25 years, capital was invested to continuously modernize the equipment and
grow capacity and capabilities, including the purchase of a nylon texturing and covering business,
but the philosophy always was to have the most efficient equipment and make the best-quality
product.

In the late ’90s, Asia began to grow as a manufacturing venue for polyester yarns as well as
fabrics and finished products. The U.S. textile market — most notably, apparel — eroded
significantly between 1998 and 2008.

TW
:
Coming into 2007, Unifi had been losing money year after year since 2000. What measures were
taken to turn the company around?

Jasper: In September 2007, the Board put in place a new executive management team,
and we refocused on being a successful U.S. manufacturing company. In some ways, the company was
heading away from U.S. manufacturing and more towards manufacturing in China through a joint
venture we had established in the region.

To turn the company around, we consolidated and refocused the company on our manufacturing
capabilities. We now have three plants — Yadkinville, Madison and Reidsville — and about 1,950
employees in the United States. At each of those plants, we’ve made tremendous improvements in
efficiency and flexibility, realizing several million dollars in savings. Certainly, our operations
over the last three years have become much more efficient and flexible. To help us in that effort,
we are using [Knoxville, Tenn.-based] Qualpro’s multivariable testing (MVT) process to implement
statistical process control in all areas; and we are using lean manufacturing principles focused on
the supply chain and streamlining operations.


TW
:
How has the MVT process helped Unifi improve its operation?

Jasper: With MVT, you take every project you initiate through a step-by-step
process and very aggressively and efficiently complete them. Using statistically sound principles
and process control to measure improvement, you continue to measure whatever you are improving
using a control chart. We’ve completed more than 50 projects and have probably 50 going on now.
Unifi has made great progress in the last two years from the projects we’ve completed, and we
expect further progress as we conclude additional projects. It’s a very disciplined, rigorous
process that makes you focus on and complete the most important projects before moving on to the
next ones.

TW
:
Unifi’s line employees have played a role in implementing improvements. What has been the value
of this involvement?

Jasper: Once you complete a project and you’re monitoring improvement it’s the men
and women on the floor who make sure we continue to do things right, and they’re very involved in
both the MVT and the lean manufacturing programs. They know a lot more about what’s going on than
anyone else, and if you involve them, you will find things you wouldn’t have otherwise. Also, if
they’re part of developing the solution, it’s a lot more likely to be successful because they’ve
got a stake in it, and they’ll make it succeed. For instance, breaks at our polyester texturing
facility have been reduced substantially. We’ve been in tough times, and they recognize that the
more we improve our processes, the more likely it is we’ll stay in business. Our people on the line
have been absolutely fabulous — very bright, very aggressive — and they’ve helped us get a lot of
these things done.

TW
:
What other measures have you taken to improve the business?

Jasper: We’ve focused on and put resources toward growing our branded PVA
products. Even through the recession, we increased our R&D and marketing expenditures because
we truly believe the PVA products will continue to grow and provide revenue, especially Repreve®
[Unifi’s 100-percent polyester and nylon recycled-content product line], and we’ve been very
aggressive in maintaining our market share.

With the investment in the Repreve Recycling Center, we’re backward integrating the Repreve
production chain
(see ”
From
Waste To Worth,” www.TextileWorld.com), which will help us better control the quality and
secure a cost-competitive source of raw materials. We’re buying the latest technology, and it will
be very, very efficient.

TW
:
Have the North America and Central America-Dominican Republic Free Trade Agreements (NAFTA and
CAFTA-DR) had much effect on your business?

Jasper: NAFTA and CAFTA-DR are very important to our business. Actually, over the
last year, we’ve seen growth in that region. That’s really helped stabilize our business.

The region is primarily fed from our U.S. operations, but we’re also putting a texturing and
twisting operation in El Salvador that we expect will be fully operational by December 2010. That
operation will employ about 175 workers and supply sewing thread, which is a big market in Central
America. The operation will increase our regional polyester texturing capacity by about 15 percent.
We’re putting in eight texturing machines that will process some 200,000 to 400,000 pounds per
week, depending on denier; and we’re installing about 26 twisting machines, adding another 200,000
pounds per week of twisting capacity.

TW
:
Unifi has a subsidiary in Brazil. What markets does that operation serve?

Jasper: Unifi do Brasil was formed in the late 1990s, and it now employs about 500
workers and in fiscal 2010 provided around 20 percent of Unifi’s consolidated net sales. It
produces primarily polyester textured yarn almost exclusively for the Brazilian market. It has been
quite a good business, especially over the last few years as the Brazilian economy has continued to
grow. There was a little downturn during the recession, but we’ve been very pleased with that
business, and also its prospects for growth in the future.

Jasper: We decided it would be better for us to exit the joint venture and create
a wholly owned sales and marketing company there. We now have 11 sales and marketing
representatives there and work with local manufacturers who commission manufacture to our
specifications, and that is working well. We sell primarily our branded PVA products in China, made
to the same specifications as those made in the United States, allowing us to supply the same
product locally produced here and in China. That’s a big selling point with brands and retailers
that they can buy the same products in both places, especially if they have a dual sourcing
strategy. 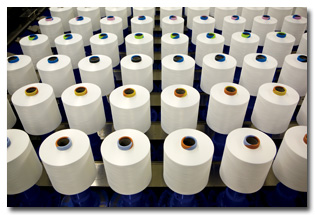 TW
:
How does your sustainability platform play into your strategy?

Jasper: Unifi has a long history of sustainability. For many years, we have
focused on reducing our packaging and have used returnable packaging to ship our products. We
continue to donate biosolids generated from our dye houses to local area farmers to use as
fertilizer. We have done quite a lot to reduce the amount of waste generated in our manufacturing
processes, including recycling our own waste to help make Repreve, which is a big step in what we
have been doing. Recently, we announced a 40-percent ownership of a biomass feedstock company
called Repreve Renewables LLC. We believe the crop is the best biomass in the Southeast. This
biomass stock is called FREEDOM™ Giant Miscanthus [a hybrid grass that converts sunlight to biomass
energy], which is trademarked by Mississippi State University and used under license by Repreve
Renewables
(See ”
Unifi Invests In
Repreve® Backward Integration, Establishes JV,” www.
TextileWorld.com). The plant consumes carbon dioxide (CO2), and when it dies,
the CO2 is sequestered back into the ground before the plant is harvested.


TW
:
Will you be using the biomass in your own operations?

Jasper: Indirectly — It will be used for power generation, which we may use.
Ultimately, it may be turned into ethanol and diesel. We’re in the embryonic stage of this venture
and are excited about its potential over the next several years.

TW
:
What do you foresee in the future for the U.S. textile industry and for Unifi?

Jasper: The U.S. textile industry is going to be flat at best, and maybe continue
to erode a bit, but we think that erosion will be offset by growth in Central America. The Central
American supply chain really is competitive with the Chinese supply chain, at least for certain
types of garments — such as performancewear, T-shirts and men’s pants. There was tremendous erosion
from 2000 to 2007, but we think that’s moderated somewhat, and we’re not looking for any great
erosion in this region in the next few years. While there are always risks, our planning models
work off the assumption that the combined regional market will be generally flat going forward.

We are optimistic about Unifi’s future, assuming slow growth in the U.S. economy. Our target
is to double sales of our branded PVA products over the next three years. We’ll continue to improve
efficiencies in our operations — we believe that there’s still savings we can get there, and we’re
optimistic that we’ll continue to improve our results. We did $55 million EBITDA in fiscal 2010 and
expect to do $65 million this fiscal year. We’re spending more capital this year than we have in
the last several years on projects that have a fairly quick payback, so we anticipate our results
will continue to improve over the next two years.

TW
:
What sorts of investments are you making?

Jasper: We typically spend $8 million to $10 million a year to maintain our
plants. We expect to spend around $20 million in fiscal 2011. The Repreve Recycling Center will
cost roughly $8 million in total, and we have several other capital projects slated that we believe
will increase our asset flexibility and product capabilities.