T
o exchange information among its members and its very active technical committees, the
Brussels-based International Wool Textile Organisation (IWTO) arranges a congress every year. The
79th Congress, held in Paris May 3-5, 2010, ended with expectations of a positive future for wool.
Speakers presented a wide overview of current developments in the global wool industry.

Some 300 delegates from 23 countries attended the event, which showcased projects and other
initiatives that signal wool’s rebirth as a preferred material for apparel, interior and technical
textiles applications, especially owing to the fiber’s natural attributes and ecological benefits.

Wool is a premier raw material for textiles, and the International Wool Seal at one time was
a very popular label. But, for various reasons, wool nearly disappeared from the roster of top
natural fibers in the last 20 years. In response, the main wool-producing countries formed IWTO to
represent the global wool trade and provide in-depth information about wool. 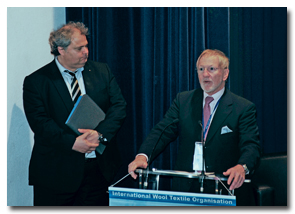 
Speakers presented papers under the theme “Wool – Change to a Healthier and Safer
Environment.” In fact, there is a trend in the wool industry to produce the fibers in a better
environment. And wool is regaining its popularity, thanks to the work of IWTO and its members, and
also to its natural qualities.


Wool is an animal fiber, and there is growing environmental and social consciousness, mainly
in the West, regarding animal breeding. During the Animal Welfare & Environment Session, Andrea
Gavinelli, European Commission Animal Welfare Unit; Daniela Battaglia, Food & Agriculture
Organization of the United Nations; and Michael C. Appleby, chief scientific adviser, World Society
for the Protection of Animals, discussed different points of view regarding animal welfare efforts
within the wool industry. Participants agreed to cooperate to promote best practices and keep
animal welfare in the spotlight.

Australian wool growers have practiced mulesing for some time. Old-fashioned production
mills and methods such as mulesing have reinforced the image of an old-fashioned textile industry,
and an old-fashioned wool industry in particular. During the session, a young woman in the audience
accused Australian breeders of mistreating their animals by using the practice. One panelist, a
farmer, responded, “We love our animals, we treat them right, we have been doing this for more than
100 years.” A striking response, when a change of attitude on this issue by the breeders could and
should help wool regain top place in the premier league of fibers.

Getting Back On Top


Panelists argued that wool is “not a fiber for young people.” Yet, wool has been used for
millennia to protect the human body from the elements. It seems it could easily regain its position
among young people as a top fiber: The animals are raised in nature; they are not killed to harvest
the wool; and in the end, their meat can feed people. The list of reasons is long.

To disregard modern and positive thinking seems thoughtless. If the wool industry does not
consider the concerns of the current generation of young people, it would miss a big opportunity
for success, and the industry would be in trouble again. The event in Paris could be a new start.