A
ccording to recent documents released by the US Department of Agriculture and the
Commodity Credit Corporation (CCC), a corporate agency of the US government, The Food,
Conservation, and Energy Act of  2008 and Upland Cotton Economic Adjustment Assistance Program
presents interesting opportunities for domestic users of eligible upland cotton.

For spinners, papermakers and nonwoven cotton product producers,  the program will pay 4
cents per pound for eligible cotton opened by the producer each year for the next four years. In
year five of the program, payments by the CCC will be reduced to 3 cents per pound. The payments,
intended to support the competitiveness of domestic users of eligible baled upland cotton
regardless of origin, must be reinvested in plant and equipment. 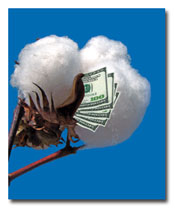 
The application provided by CCC states: “The Agreement Holder must make capital expenditures
equal to, or greater than, any amounts paid by CCC within 18 months following the end of the
marketing year for which the payment was claimed. A marketing year [runs from] August 1 through
July 31.”

Authorized expenditures include “costs incurred for purchases of land, or the acquisition,
construction, installation, modernization, development, conversion, or expansion of depreciable
fixed assets. Such capital expenditures must be directly attributable to the purpose of
manufacturing upland cotton into eligible cotton products in the United States.”


In speaking with industry sources,

Textile World
was given the example of a 30,000-spindle spinning frame using approximately 370,000 pounds
of cotton per week. At 4 cents per pound, the spinner is reimbursed $14,800 per week for four years
and $11,100 per week for the fifth year, for a total reimbursement of close to $3.6 million through
the end of the five-year program. When considering a 10-year depreciation of machinery and the
reimbursement, there is the strong possibility of a significant investment opportunity.

The industry might also upgrade and diversify product lines. Adding novelties or specialties,
or increasing efficiencies certainly are possibilities. Spinners that have been eyeing the
nonwovens industry might be able to leverage their spinning operations to create an investment pool
for entering a new nonwovens business. Nonwovens manufacturers may extend their lines as well.

With an estimated 4 million, 480-pound bale usage, the industry would consume 1.92 billion
pounds of cotton worth potential payments of $76.8 million per year for four years, totaling $307.2
million, with a fifth year worth an additional $57.6 million. Depending on usage and qualification
of cotton, product and users, the investable funds could reach $365 million over the course of five
years.

Few might expect considerable investment in US textiles in 2009. The Upland Cotton Economic
Adjustment Assistance Program, however, could have significant beneficial  impact for years to
come.