F
rom Oct. 11 to 14, 2008, the ITMF Annual Conference – the global textile industry summit
organized by the Switzerland-based International Textile Manufacturers Federation (ITMF) – will
take place on the beautiful island of Mauritius. Mauritius is well-known for its exquisite
surroundings for holidays. But who knew that more than 55,000 people work in its textile industry?

The Hotel Le Meridien will host the conference. The hotel offers 265 ocean- and
mountain-fronted rooms and suites, all with a private balcony or patio. 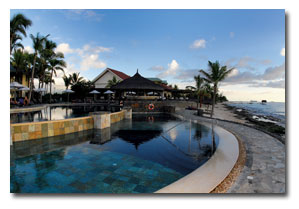 The next global summit of the entire textile industry will be on the beautiful island of
Mauritius at the Hotel Le Meridien. 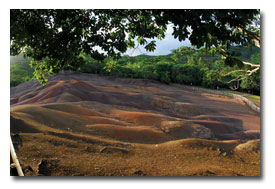 Chamarel, or the Seven Coloured Earth, is a famous site on the island of
Mauritius.

The Republic of Mauritius is an island nation off the coast of the African continent in the
southwest Indian Ocean, some 900 kilometers east of Madagascar. Mauritius includes the islands of
St. Brandon, Rodrigues and the Agalega Islands, and has been in the spotlight for centuries thanks
to its strategic position. First came the Portuguese, then the Dutch, and after that the French and
eventually the British, who stayed for more than 150 years. Mauritius obtained its independence in
1968, and the country became a republic within the Commonwealth in 1992.

Mauritius offers a great deal to the world of textiles: the island is a beautiful place and
a true melting pot for different cultures. The people are used to dealing with different cultures,
and most speak at least two languages, English and French in addition to Creole. The textile
industry is known for its quality work, reliability and punctuality. The companies and their
proprietors pay a lot of attention to their employees and have a great sense of social and
corporate responsibility, supported by modern labor laws. Education is top priority. Every child
goes to school up to the age of 16, school is free of charge for everybody, and there is even free
transportation available for the schoolchildren if necessary.

Mauritius is a stable democracy with regular free elections and a positive human rights
record. The country is a parliamentary democracy with a president as the chief of state. The
president is elected for a five-year term by the Mauritian parliament, the National Assembly, with
its 62 members. The government is headed by the prime minister and a Council of Ministers, elected
on a five-year basis. The most recent general elections took place on July 3, 2005. Dr. The Hon.
Rajesh Jeetah, minister of industry, small and medium enterprises, commerce & cooperatives, has
a textile background and wrote his thesis in textile technology at the University of Manchester,
England. It is ideal for the local textile industry to have a man at the top of the ministry who
speaks the same language.

The island, with its textile industries, is competing strongly with other markets. The main
reasons given by Jeetah to invest in Mauritius and not elsewhere include political stability with a
growing gross domestic product (GDP) over the past 25 years. “Mauritius enjoys a reputation of a
multicultural environment with a multitude of languages,” Jeetah said. “We understand the world,
and through our history, we have the same cultural background as most of the Western countries. I
am convinced that ‘Made in Mauritius’ will be a premium label shortly. Our goal is to play in the
top 10 league of the most preferred locations for business. This is possible because we provide
non-bureaucratic business conditions.”

According to statistics, 35,000 global companies have either their headquarters or
subsidiaries in Mauritius, with assets valued at $35 billion.

According to Jeetah, textiles and clothing are the biggest industry sectors on the island.
Sugar still plays a significant role; however, textiles are far more important. More than 55,000
people work in the textile industry, and not only in garment manufacturing. The turnover of the
Mauritian textile industry is more than 1 billion euros. Today, the production of woven and knitted
fabrics is increasing, due to an ongoing verticalization of the textile industry in this country.

The textile industry is very important for Mauritian GDP. Textiles are one of the
cornerstones of the country. The population, numbering 1.2 million, represents a domestic market
worth $143 million. The industry’s employees produce $1.5 billion in export revenues. In 2006,
textiles represented 49 percent of all manufactured exports. These days, all sectors of the textile
industry have the same level of importance. The 20 largest textile companies are producing 100
percent for export. Fifty medium-sized enterprises have a 50:50 domestic/export turnover ratio, and
the 125 small businesses produce only for the domestic market.

The most important export markets for the Mauritian textile industry reflect the
multilingual country, with its English and French languages. Great Britain, 34 percent; France,
19.5 percent; the United States, 13 percent; and Italy, 5.4 percent, are at the top of the list,
followed by South Africa. Mauritius was not directly hurt by the global financial problems, but, of
course, each and every country is affected. Prices on the world markets will drop if the purchasing
power of the people is falling. That is the reason for diversification – to balance the risks in a
better way. For example, exports to South Africa rose by 300 percent in the last 18 months,
representing a value of $100 million. The next target is India, to sell “Made in Mauritius”
lingerie and swimwear to Indian women.

Salim Ismail is considered to be the inventor of the idea to bring the ITMF conference to
Mauritius. He is chevalier of the French Legion of Honour, and from 2002 to 2005 was the vice
president of the African Industrial Association (AIA). He is a member of the ITMF Advisory Board
and chairman of the Organizing Committee of the ITMF Annual Conference 2008 in Mauritius. Ismail
joined his family’s company, Groupe Socota, in 1964, entering its main subsidiary in Madagascar: La
Cotonnière d’Antsirabe COTONA. In 1967, he was appointed director of the spinning department,
became technical director in 1969 and CEO in 1980. In 1989, he took over as chairman and CEO, with
responsibility for all textile activities of Groupe Socota.

The basic role of MEXA is to promote and support the industry of Mauritius, providing all
kinds of logistics and data related to the industry sectors. “In earlier days, MEXA was only
supporting textiles,” said Director Danielle Wong. “Today, MEXA is also lobbying for its industries
in government bodies. The aim of MEXA is to be the preferred export association of Mauritian
industry.”

MEXA is a private body with no financial support from the government; members pay an annual
fee to run the association. “We are an important and influential organization and are very
well-incorporated in this country,” Wong said.

To become a member of MEXA, a company’s export quota must reach at least 85 percent. The
main export destination countries for the member companies today are Great Britain, France and the
United States, reflecting old threads from the past.

At the moment, the Mauritian rupee is the big problem. In the last six months, the currency
has appreciated 15 percent against the US dollar.

Mauritius is a small country, and was not hurt that much by the international financial
crisis, according to Wong. “The rupee is a very interesting currency: For a three-month
fixed-deposit, the current interest rate is 7 percent, which is pretty high,” she said. “So we have
a lot of currency speculation in this country, and we have to observe the market very carefully.
However, the textile industry shows a different picture: It has been very much affected. Exports
have dropped sharply since September 2007. Early in January, the exchange rate with the US dollar
was 28 rupees; now it is only 25.”

Enterprise Mauritius is a public company, composed of private companies and the government,
to support the export industry and related services with the exceptions of finance and tourism.

Enterprise Mauritius is led by Chairman L. Amédée Darga. The association has a public
commitment to promote export businesses and related services, except financial and tourism
industries, and competitiveness and provision of information to global players; and to support
manufacturing sites and development of new product lines, sectors and subsectors. Enterprise
Mauritius was founded in 2004, and began its activities in mid-2005. The association’s philosophy
reflects a market-oriented approach to support the related industry, which represents 25 percent of
the national GDP, and make it more competitive.

In the late 1990s, particularly 1997, manufacturers from Hong Kong came to Mauritius and
invested a lot of money to produce quota-free garments. This development allowed the local textile
industry to improve its infrastructure and become more competitive. Eventually, the Hong Kong
manufacturers left Mauritius, moving their production facilities to China. This was a big challenge
for the local textile industry.

Up until the last seven to eight years, Mauritius was basically a sewing country. This has
changed a lot more recently. Spinning is catching up in the production processes, and knitting is
the primary technology for fabric formation. Weaving is still not very common. The spinning sector
is big enough to fulfill all requirements of the local market. The factories produce more than 90
percent of all required yarns, mainly cotton. There is a strong need for more man-made fibers; this
is another project for the near future, especially with respect to technical textiles. Today, the
industry is still mostly in the up-market segment of garment manufacturing. However, because of the
ongoing verticalization of the industry, some big companies have spinning, knitting, finishing and
garment-manufacturing divisions.

It’s very easy to invest in Mauritius. The infrastructure is favorable to foreign
investments, there is enough energy and water, ever-so-important bilingual people, and the free
flow of financial transactions. “We are not producing commodities,” Darga said, “We manufacture
high-value competitive products. Enterprise Mauritius has high expectations for the future. To meet
these requirements, it is necessary to diversify the textile products in apparel, high-quality
lingerie, swim- and seawear and technical textiles. Mauritius is not a low-cost country; however,
it has a high level of productivity with excellent products, backed up by sophisticated business
services.”

“The opportunities are excellent,” Jeetah said. “We are in the process of rebranding
Mauritius; and, with the existing free economic zone, it’s much easier to work here. Compared to
competitor markets, the Mauritian textile industry is very flexible. Producers also accept small
orders. The main products today are T-shirts; shirts; trousers; shorts; pullovers; and, more and
more, lingerie and swimwear. The market is also actively studying the technical textiles sector.
Thanks to the structure of the industry with its capacity for small and medium production lots,
technical textiles will be an important area in the future.”