I
n Mohawk Industries’ corporate environmental policy statement, CEO Jeff Lorberbaum states
that sustainability is an essential business practice in today’s global economy. The policy
outlines the company’s commitment to support and comply with programs that foster environmental
stewardship and safety in line with its common goals.

Affirming the environmental movement’s mantra, reduce, reuse and recycle, Mohawk has developed
numerous programs to reduce waste and consumption, and to recycle used products into new carpet and
other floor covering products. Its recycling efforts began in the 1990s as technologies became
available to convert used materials into new products. They are consistent with overall US carpet
industry initiatives through the Carpet America Recovery Effort, of which it is a corporate
sponsor, to divert 40 percent of used carpet from landfills by 2012, and eventually to recover all
carpet for recycling or reuse. The company continually reevaluates its operations, design processes
and the raw materials used in its products looking for alternatives to current practices, materials
and natural resource use that will help it reduce its environmental footprint. Last year, its Lees
Carpets plant in Glasgow, Va., received ISO 14001 certification for its environmental management
system and became one of only a handful of carpet manufacturers to have earned both ISO 14001 and
ISO 9001:2000 certification related to product quality
(See ”
Floor
Covering News,”
TW, May 2005). Mohawk’s Landrum, S.C., woven carpet plant, which has had ISO
9001 certification for more than 10 years, is currently working toward ISO 14001 certification; and
several other carpet-manufacturing plants are working toward earning both ISO 9001 and ISO 14001
certification within the next 24 to 36 months. 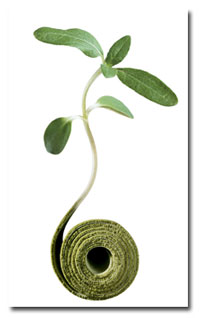 Mohawk converts approximately 25 percent of all the plastic bottles used in North
America into 160 million pounds per year of high-quality polyester carpet fiber that generally
matches or exceeds the quality of fiber made from virgin resin. Since 1999, when it acquired a
bottle recycler, it has recycled more than 17 billion polyethylene terephthalate beverage bottles,
and claims to be the largest recycler of plastic bottles in the world, estimating its recycling
system accounts for more than 70 percent of all post-consumer recycled carpet fiber produced.
Mohawk Home uses 10 million pounds of used tires per year to make designer
doormats. The number of tires recycled in this way is 28 times the number used by the entire
Chicago taxicab fleet. In a recycling/waste reduction initiative, the company converts waste
including carpet edge trim, soft drink bottle caps and film used to wrap pallet loads into man-made
fiber carpet cushion and plastic carpet roll cores. The cores, themselves recyclable into new
cores, replace cardboard rolls, lasting three times longer and providing better support for the
rolled carpet. Mohawk reports this initiative saves 68,000 trees each year.
Mohawk counts among its commercial product offerings more than 200 that contain
recycled materials from both post-consumer and post-industrial sources. These include nearly 100
broadloom products offered under three commercial brands and containing an average of 15 percent
post-consumer content based on weight. The company says the recycled content in these products
represents more than 9 million pounds of discarded product diverted from landfills annually, and
projects this figure will grow as it converts other carpet products to similar systems.
One of the most recent developments is a proprietary carpet tile made of
materials that include recycled carpet and carpet-related components. Through a closed-loop system,
the carpet is eternally recyclable into new carpet. In addition, certain components contain
materials mined from the nearby Dalton/Whitfield County, Ga., landfill.
Mohawk also has implemented a National Carpet Recovery initiative whereby the
company utilizes its distribution systems logistics and infrastructure as well as external
resources nationwide to recover and recycle its carpet products at the end of their useful life.
Mohawk anticipates its ReCover system will reclaim millions of pounds of used carpet
annually.

In terms of reductions, Mohawk cut its water usage in half from 1995 to 2003 through
conservation initiatives and development of new processes. Its Dublin and Sugar Valley, Ga.,
facilities include water treatment plants that restore the effluent to a quality much higher than
is required by the Environmental Protection Agency, the company reports.

Mohawk has reduced the phosphorus content in its wastewater by 70 percent as a result of a
processing change. Today, hazardous waste streams from most company facilities fall below base
levels that require reporting under federal regulations. Over the last decade, Mohawk also has made
substantial reductions in energy consumption through the implementation of energy conservation
programs and manufacturing equipment upgrades. Although no renewable energy is available locally,
the company has committed to purchase renewable energy tags from totally renewable energy sources
as offsets. It also has initiated proprietary research into developing renewable energy for one of
its major manufacturing plants.

Beyond reductions in water, energy and chemical waste streams, Mohawk has reduced the amount of
fiber needed to manufacture some carpet and rug products through production of woven carpet which
uses 30-percent less fiber and lasts more than twice as long as tufted carpet.

Within another year, Mohawk expects to be making carpet from bio-based man-made
fibers. The company has partnered with Wilmington, Del.-based DuPont to bring to market a new line
of residential carpet offered under the SmartStrand with DuPont Sorona® polymer brand. Sorona, a
family of polymers made from 1,3-propanediol, originally was developed as a petroleum-based
polymer, but DuPont has developed a bio-based variety made partly from corn sugar. The bio-based
polymer will be in commercial production later this year, and Mohawk will begin producing the new
tufted residential carpet line in 2007.


The Right Thing To Do

Commenting on Mohawk’s commitment to environmental stewardship, Monte Thornton, president,
Mohawk Flooring, stated: First and foremost, it is the right thing to do. Next, there is a
financial reward associated with good environmental stewardship. It costs more on the front end to
implement these programs, but these commitments yield great returns, from reduced depletion of
natural resources, and reduced water and energy usage, to improved employee morale and being good
corporate and community citizens. The informed consumer now expects to purchase products from
environmentally responsible companies.