T
he implications of increased economic relations between the United States and China have
been the topic of debate for some time – particularly as China acceded to the World Trade
Organization (WTO). Often, the discussion devolves into a trade theory argument. In a search for
clarity, following are direct excerpts from The US-China Economic and Security Review Commission’s
Report to Congress, published in June 2004. The 290-page report details growing concerns reached
through a broad and bipartisan consensus.

The report summary states: “Based on our analyses to date, as documented in detail in our
Report, the Commission believes that a number of the current trends in US-China relations have
negative implications for our long-term economic and national security interests, and therefore
that US policies in these areas are in need of urgent attention and course corrections.” 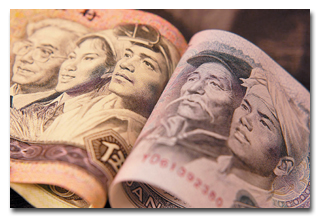 Exchange Rate Policies On US Trade

Third, overvaluation reduces the profitability of US manufacturing firms by making foreign
goods cheaper, and this reduces firms’ incentive to invest in new production capacity.

These negative effects on the trade deficit and manufacturing in turn adversely impact
overall US economic growth. According to the Bureau of Economic Analysis, the US goods trade
deficit lowered GDP growth by 0.09 percent in 2001, 0.71 percent in 2002, and 0.42 percent in 2003.
The trade deficit therefore deepened the recession and is hampering the recovery.

The critical economic significance of exchange rates was summarized in the testimony before
the Commission by Franklin J. Vargo: ”Only 11 percent of the cost of a US manufactured good is
labor. If a product gets a 20- or 40-percent price advantage because of a currency, that is a much
more significant factor.”

There is widespread agreement the dollar has been overvalued against the currencies of the
world’s major trading countries. With regard to China, the Commission heard testimony that the yuan
is undervalued by between 15 and 40 percent. Based on this testimony and other economic evidence,
the Commission believes that:

•    the yuan needs to be revalued substantially upward against the dollar;

•    as part of this revaluation, the yuan should be pegged against a
trade-weighted basket of currencies to avoid excessive fluctuation against the currency of any
single country;

•    China should refrain from adopting a floating exchange rate at this
time, as its banking system and financial markets are not yet prepared for such an arrangement; and

•    China should take active steps to reform its banking system and
financial markets to prepare them for an eventual floating exchange rate.

Case For Revaluing The Yuan

The dollar has now entered a period of correction against the currencies of other
industrialized countries. As shown in [Figure 1], since January 2, 2002, it has fallen 33.3 percent
against the euro, 16.4 percent against the yen, and 14.4 percent against the Canadian dollar. In
addition, it has also fallen significantly against other currencies such as the pound sterling and
the Australian dollar. However, there has been no adjustment against the Chinese yuan, which is
fixed through official intervention. Additionally, there has been little in the way of correction
against the Taiwanese, South Korean, and Singaporean currencies, all of which countries run large
trade surpluses with the United States. This lack of adjustment has occurred despite the fact that
there is compelling evidence that the yuan is undervalued. China now constitutes the single largest
contributor to the US trade deficit, and economic fundamentals support the claim that the yuan is
undervalued.

China’s economy has been characterized by a trade surplus (external imbalance) and by rapid
economic growth with incipient inflation (internal imbalance). A currency revaluation will help
restore both trade balance and domestic economic balance by reducing exports and reducing demand
for domestically produced goods.

Conversely, the US economy has a large trade deficit (external imbalance) and excess
capacity and unemployment (domestic imbalance). Dollar devaluation will help restore both external
and internal balance by increasing exports and demand for US-produced goods.A revaluation of the
yuan is also needed for global economic equilibrium. As noted above, the United States has
significant trade deficits with other East Asian economies, including Taiwan and South Korea. These
economies are apprehensive about revaluing their currencies for fear that they will lose
competitiveness relative to China.

A revaluation of the yuan would likely free this logjam, allowing these economies to revalue
too, thereby smoothing and accelerating the process of dollar adjustment.

Additionally, failure to revalue China’s currency while currencies of other major trading
partners appreciate promises to cause economic disruption. This is because other economies – such
as Japan and the euro area – are implicitly being forced to take on a larger burden of adjustment
to correct the US trade deficit, while the country with the largest surplus (China) undertakes no
adjustment.

Arguments Against Revaluing The Yuan

Some argue the yuan does not need to be revalued. The Commission rejects this position.

One argument is that revaluing the yuan could lead to a financial crisis in the Chinese
banking system that ends up perversely generating a lower value of the yuan. The claim is that
opening China’s capital account and floating the yuan risks a massive exodus of Chinese savings
that could trigger a domestic financial crisis and yuan depreciation. Thus, paradoxically, capital
account liberalization and yuan floating could actually cause depreciation rather than
appreciation.

However, this argument confuses revaluation of China’s exchange rate with a shift to a
floating exchange rate. The Commission does not recommend floating the yuan at this time. Instead,
China should significantly revalue the yuan upward while maintaining capital controls and a fixed
exchange rate over the near term. This would address the underlying balance of payments
disequilibrium problem while avoiding financial crisis.

China has begun to recognize its problem of domestic financial fragility, but must now
accelerate the process of remedying it. The fact that capital account opening could trigger a
massive outflow of Chinese bank deposits reveals the inhospitable climate of Chinese financial
markets for domestic wealth owners. China must therefore move to make its financial assets more
attractive. The threat of domestic capital flight is not going to disappear. Indeed, it stands to
grow in magnitude as Chinese household financial wealth grows with development and households in
turn seek to diversify their portfolios internationally.

The bottom line is that China’s domestic financial fragility does not justify an undervalued
exchange rate that exports deflationary pressures and destroys US manufacturing jobs.

A second argument is there is no need to revalue, since market forces will force a
revaluation despite the Chinese government’s exchange rate intervention.

This argument is based on the discredited economic doctrine of monetarism. The claim is that
China’s persistent trade surplus forces its central bank to sell yuan and buy dollars to prevent
appreciation and that this expands the money supply, which will in turn cause inflation that drives
up Chinese prices. As a result, China will gradually become less competitive, while US
manufacturing companies will become more competitive.

The above monetarist argument is flawed. First, even if the mechanism worked, there are long
and unpredictable lags between expansion of the money supply and higher prices. In the meantime,
American manufacturing firms may be compelled to close down, with consequent loss of jobs.

Second, Chinese monetary authorities can take measures to mitigate the effect of a rising
money supply on prices. These include raising reserve requirements in the banking system and
sterilizing the monetary expansion by selling bonds and thereby withdrawing money from circulation.

A third argument is that the China trade deficit is unrelated to the exchange rate and is
the result of a shortage of US saving – principally the result of the large US government budget
deficit.

The argument is the US economy is consuming in excess of what it can produce and has to
import the balance. The Commission believes the United States must address its chronic budget
deficits, but it rejects the notion that this obviates the need for China to address its currency
undervaluation.

Contrary to the claims of the saving shortage hypothesis, the US economy currently has
severe excess manufacturing capacity and is capable of producing significantly increased
manufacturing output. A shortage of national savings is not the problem. The real problem is that
the misaligned exchange rate results in US goods being too expensive relative to foreign goods.
This drives down demand for US-produced output, and, over a more extended time period, contributes
to the elimination of US manufacturing capacity and the creation of a structural trade deficit.
Plant closures and the loss of well-paying jobs in turn undermine the tax base and contribute to
state and local fiscal problems.

A fourth argument is that though the United States has a large trade deficit with China,
China’s overall trade surplus with the rest of the world has been much smaller, and in the first
quarter of 2004 it registered a small deficit. Consequently, China’s currency may not be
undervalued.

Again, the Commission rejects this argument. [Figure 2] shows the United States has a trade
deficit with every region of the world, and the deficit with China is especially large. This
pattern points to a need for a generalized realignment of the dollar, and China should revalue its
currency as part of that realignment.

Second, for the last several years, China has run a global trade surplus. Moreover, the fact
that China has run a surplus even as it grew at 9 percent per annum is compelling evidence of
undervaluation. Any other country that grew at that rate would have quickly run up a huge trade
deficit. The small move into deficit in the first quarter of 2004 reflects continuing breakneck
growth and rising commodity prices, particularly in oil. That China still essentially has balanced
trade under these conditions is testimony to how undervalued the yuan is.