W
hen Wal-Mart, the world’s largest retailer, announced last year that its top 100
suppliers will have until January 2005 to become radio frequency identification (RFID)-compliant,
it created quite a stir. Watching the move, Wal-Mart’s competitors started wondering if they should
be looking at implementing this technology to manage their supply chains as well. Within a short
period of time, the buzz surrounding RFID technology soared to a level that some industry experts
liken to the heady days of the 1990s.

As a technology, RFID is nothing new – scientists first started looking into its commercial
applications in the 1970s. However, it wasn’t until the 1990s that standards were developed and the
technology bore fruit in its commercial deployment, such as in automatic toll collection on
highways and keyless entry in automobiles. On the other hand, applications in manufacturing such as
in supply chain management  – which is the case with Wal-Mart – only now are being adopted. 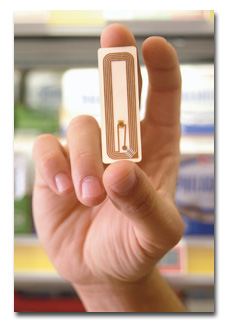 At the heart of RFID technology is the RFID tag — a miniature computer chip with an
antenna, which stores a code that provides a variety of information. The code is deciphered by a
RFID reader, which is capable of reading the tag and capturing the information from a
distance.

Textile World
recently interviewed Marshall Gordon, industry executive for retail, apparel and footwear at
SAP America Inc., Newtown Square, Pa. SAP is a partner in the Metro AG Future Store Initiative,
which was presented at the National Retail Federation Show in January. The initiative has equipped
a store in Germany with a number of technologies, including RFID, to study their potential
commercial applications.


TW
: Why is RFID being implemented now?

Gordon: RFID is not new. The challenge has always been to identify when it is
appropriate to apply the technology to your particular supply chain model. While the costs of many
of the components of a RFID system have come down, the cost of what I call the “disposable
component,” which is the chip itself, is of greatest interest. The price of the RFID tag went from
about $1 each in 2000 to somewhere between 25 cents and 40 cents in 2003. It’s expected to drop
further to somewhere around 5 cents, which seems to be a general target for the next few years. The
prospect of a 5-cent tag makes RFID a compelling option in many consumer product, apparel, footwear
and textile applications.

The other important improvement from a textile standpoint is that the durability of available
tags has greatly improved over the past few years. The high heat and moisture challenges we have in
textile processing are now manageable.

TW
: What are the benefits of RFID?

Gordon: The technology itself offers an opportunity to scan many items
simultaneously because it does not need individual line of sight for each item. Thus, a pallet
arriving in a warehouse with 10 cases is scanned once, reading all 10 cases simultaneously –
including the two in the center of the pallet hidden from the human eye.

Additionally, the ability to store more information on a tag than a bar code enables
application of the electronic product code (EPC) to identify items uniquely, versus just by SKU.
What it is, when and where it was made, and where its components came from are types of information
manufacturers might save on a tag. This information is useful, for example, if you have a recall
situation. Let’s say you are recalling fire-retardant blankets from a store – with RFID tags
attached to the blankets, you know the manufacturer and fabric lot origin of each blanket. A recall
can be targeted – instead of recalling every blanket, you’re only recalling those that truly are
harmful based on their fabric lot origin. The recall is far more effective, less costly; and you
don’t have to clear the shelves of every retailer in every market.

TW
: How does it benefit textile manufacturers?

One opportunity with RFID is automating basic tracking of products. Current manual processes
require employees to scan and record data as items move. RFID can help automate this. For instance,
if a pallet of yarn has a RFID tag on it and your forklift has a RFID reader aboard, your driver
has immediate information of the contents of the pallet when he pulls close enough for the reader
to communicate with the tag. Based on that, he knows where that pallet belongs. When it is time to
load a knitting machine with yarn, RFID helps locate the pallet stored in the warehouse, wherever
it may have been moved, and alerts the driver to its current location.

Finally, the logistics benefit comes from automating the manifest as a container is being
loaded. As a roll of fabric passes through the RFID-enabled dock door to the truck, that roll is
automatically added to the manifest. If you were to have the truck pass through a second canopy on
the way out of the yard, you can again match what’s on the truck with the manifest.

TW
: What should suppliers do to prepare for implementation?

Gordon: Avoid the hype – there’s a lot of interest and a lot of misinformation and
hype out there. It’s very critical that the first goal for everyone is education. There is plenty
of material to help you learn, stay up to date and understand what’s going on.

Build the internal business case – every company is somewhat unique, and you must understand
how RFID contributes to your specific processes.

Remember, technology is the enabler – your processes must be your focus, and you must be able
to take advantage of what the technology offers.

TW
: How difficult is it to implement RFID?

Gordon: It’s a matter of having the proper expectations, and allowing enough time
for disciplined testing and piloting of the technology – don’t wait until you’re forced to do
something and scurry around paying for it. Implementation is not overly complex, but it’s
engineering – there’s an awful lot of physics involved from the standpoint of testing conveyor belt
speeds and reader fields of overlap, determining the distance between readers and how pallets are
tagged, and so on.

TW
: How do suppliers know if the investment will pay off?

Gordon: As I mentioned already, you need to roll up your sleeves and take a
critical look at your business to understand what can be improved and what that is worth. Also,
watch the folks ahead of you who are investing. For Wal-Mart to enable its facilities, the amount
of money it spends will be enormous; I think they’re going to be pretty serious about it and have
done some pretty significant due diligence. Go slow if you can, but as you watch your supply chain
and others in the industry go down that path, I think you’d be foolish to not have some
understanding of what they’re doing and why. At least have an understanding of your future target.