T
he year 2003 was not especially positive for the Italian textile machinery industry,
according to preliminary figures provided by the Italian Association of Textile Machinery
Manufacturers (ACIMIT) during its traditional end-of-year press conference. Over the past year, the
industry saw a slight decrease in production numbers, which were strongly affected by a
considerable reduction in sales in the Italian market. Foreign demand, however, increased.

ACIMIT estimates 2003 production, compared with 2002, fell by 1 percent to 3,381 million
euros, while exports increased by 2 percent to reach a value of 2,468 million euros. “These results
are due to the weak economic situation affecting the entire world economy for most of the year,”
said Dr. Alberto M. Sacchi, president, ACIMIT. “To this we can also add the well-known geopolitical
situation, as well as SARS [severe acute respiratory syndrome], which blocked the activities of our
companies for a considerable time in certain important Asian markets. Within the sector, then, the
situation is different for each of the single sectors considered.”

According to ACIMIT, the most worrying aspect is the situation in the domestic market, which
accounts for about 30 percent of the turnover of Italian producers. “The continuation of the
difficult situation in the Italian textile/clothing industry is felt strongly by [the machinery]
sector,” Sacchi said. The drop-off in imports seen in 2003 also shows the turnaround for the
various sectors and customers has again been postponed.

The largest contribution to the growth in Italian exports of textile machinery in 2003 came
from Asia, where China is once again the main market, accounting for 19 percent of Italian sales
abroad. With a few exceptions, Italian exports to the entire Asian region are making encouraging
progress compared to the previous year. Most noteworthy is the sales growth in India and Pakistan.
In the West, the recovery of the US market has yet to take shape, while the only positive notes
from Europe come from Turkey and certain Eastern European countries. Finally, Italian companies are
waiting for a recovery in investments in the main European Union area markets.

“There is considerable uncertainty within the world economy, and so it is also difficult to
make forecasts for our sector,” Sacchi said. A quick survey conducted recently of a sampling of
ACIMIT member companies reveals cautious optimism for the coming year. However, the majority of the
companies interviewed expect  that over the next six months, receipt of orders in both
domestic and foreign markets will remain unchanged. 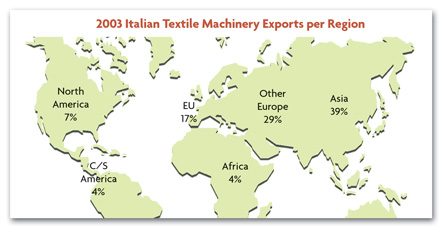 “The success of ITMA, the world textile machinery trade fair, held in Birmingham last
October, could be the first indicator of a sector recovery,” Sacchi said. “The presence of several
textile operators coming from important markets for our exports, such as Turkey, India and
Pakistan, bears witness to sustained investment in the textile sector by these countries.”

Sacchi added the success of ITMA 2003 is important not only for the European Committee of
Textile Machinery Manufacturers (CEMATEX), the event organizers, but above all for Italy, which had
the largest number of exhibitors – about 320.

As ACIMIT waits for the Italian textile/clothing industry to recover from the crisis that
has affected the entire European textile industry, it must consider the current worldwide textile
situation. There should be a more dynamic foreign sector again in 2004, with a recovery in the
North American market and confirmation of the Asian market. 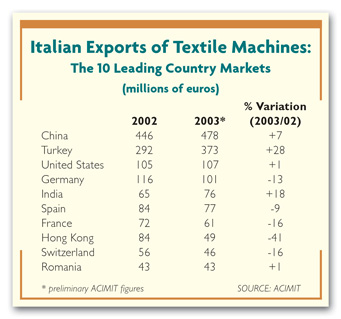 Italian companies are undergoing a profound process of development and becoming more
international in order to compete in the world market. “This is why we need not only efforts by the
companies themselves to acquire a company of adequate size and with sufficient resources for these
purposes, but also the total support of the institutions responsible for developing the
internationalization of the smes [square meter equivalents], that is, financial institutes and the
government,” Sacchi continued.

“We know well that the economic and financial structure is the weakest aspect of Italian
smes,” Sacchi said. “Many of them are constrained by the limited availability of financial
resources and have difficulties with accessing credit. To deal with this, the bank system must
provide these companies with the instruments required for the internationalization process.” ACIMIT
is making two requests.

First, the banks must fully assist in the procedure for the assignment with recourse for
Special Section for Export Credit Insurance (SACE) policies. This instrument allows an export
company to unblock credit with the purchaser, without running the risk of failure to pay by the
debtor. “Much has been said on this topic, but little has been done,” Sacchi said. “While the
leading banks have shown their willingness to implement this instrument, in concrete terms, nothing
has yet been actually done.”

ACIMIT’s second request is for the creation of credit lines for commercial collaboration
agreements with certain countries – credit lines whose minimum amounts for every single operation
should be calculated so that they also are accessible for transactions whose values are not
excessively high.

The Italian textile machinery industry is asking the government to boost investment by
offering incentives and to facilitate extraordinary merger operations between companies in the same
sector. “Investment creates, in the immediate future, an increase in demand and greater
competitiveness of the companies in the medium term,” Sacchi explained. “One way to create this
could be to liberalize the provision to depreciate investment shares over the first three years of
use. This would permit, on one hand, rapid depreciation of the machine stock of the smes and, on
the other hand, the development and expansion of the production machinery manufacturing industry.”

Finally, the causes of the failure of the Italian production industry to adapt to the market
requirements must be removed. According to Sacchi, “There must be incisive action that tries to
facilitate the extraordinary operations, such as mergers and capital contributions, between
companies. ”