W
ith the US textile industry in crisis, public attention naturally turns to those
organizations that make headlines day in and day out. Several of the industry’s flagship trade
groups, such as the American Textile Manufacturers Institute (ATMI), often are in the news,
attempting to sway both public and legislative perception in an ongoing battle to alter US trade
policy
(See ”
Focus:
ATMI,” this issue).

But there are other organizations that are active advocates for their members, while, for
the most part, maintaining steadfastly apolitical agendas.

Some of these textile trade groups date back nearly a century or more. One of the older and
more prominent associations is the Industrial Fabrics Association International (IFAI), Roseville,
Minn.

Since its founding in 1912 as the National Tent & Awning Manufacturers Association, the
organization has grown to represent more than 2,100 manufacturers, converters and suppliers from
around the world. More than 80 percent of the association’s membership is United States-based, but
there is substantial representation from other countries. Canada accounts for about 10 percent of
membership, with the majority of the remainder in Japan and Europe.

Unlike many other associations, whose memberships comprise manufacturers from a single
industry segment or market, IFAI’s roster runs across traditional lines of demarcation.

“Approximately two-thirds of our members are fabricators,” said Stephen M. Warner, IFAI
president. “You will find among us weavers, distributors, coaters, knitters, fiber manufacturers,
chemical companies, textile machinery manufacturers, converters and more. But you will also find
architects and civil engineers. Member companies range in size from one-person shops to
multinational corporations; members’ products span the entire spectrum of the specialty fabrics
industry, from fiber and fabric suppliers to manufacturers of end products, equipment and
hardware,” he said.

Part of the reason for the diversity of membership is the type of market an IFAI member
traditionally serves. Generally, these manufacturers and suppliers have identified specific niche
markets that require a high degree of specialization and customization. Typical applications for
products include, among others, geosynthetics, coated inflatable products, tents, parachute
fabrics, medical products, filtration materials, awnings and automotive materials.

In addition, unlike many other textile associations, you won’t find IFAI representatives
running up the steps of the Capitol attempting to peddle influence among the nation’s lawmakers.

“We are not a lobbying organization,” Warner said. “But we act as advocates for our members
and often work on such issues as trade legislation with the US Industrial Fabrics Institute. And we
are not a protectionist organization.”

The primary benefit members get from IFAI affiliation is networking. “We like to see
ourselves as the gatekeeper of information,” Warner said. “We provide services and information
through a multi-layered and close relationship with members, customers and suppliers up and down
the supply chain.

“We have diverse services because we serve a broad market. Many of our members are in small
niche markets that would not be able to support a trade association for their specific area of
specialization,” Warner said.

Unlike many other associations, IFAI receives only 13 percent of its revenue from dues. The
remainder comes from the specific services, conferences and publications the organization produces.

The Association of the Nonwoven Fabrics Industry (INDA), Cary, N.C., sees itself as the
leading information resource and action vehicle for nonwovens. The organization has established a
reputation for monitoring government programs and policies relative to the nonwovens industry. INDA
is the sponsor of the IDEA International Engineered Fabrics Conference & Expo, which serves the
nonwovens industry worldwide. IDEA is held every three years in the United States.

On the machinery side, the American Textile Machinery Association (ATMA), Falls Church, Va.,
seeks to advance US-based manufacturers of textile machinery. The 110-plus-member organization is
perhaps best known for its cosponsorship of the American Textile Machinery Exhibition-International
(ATME-I). Funding for the organization comes from ATME-I revenue and member dues.

The purpose of ATMA, according to the organization, is to “improve business conditions
within the textile machinery industry of the United States within a global context; to encourage
the use of the products of the industry; and to protect, promote, foster and advance the common
interests of the members as manufacturers and distributors of textile machinery and parts and
machinery accessory to textile machinery on a worldwide basis.”

The American Association of Textile Chemists and Colorists (AATCC), Research Triangle Park,
N.C., bills itself as the “world’s largest technical and scientific society devoted to the
advancement of textile chemistry.” AATCC has more than 5,000 individual members and 270 corporate
members in the United States and 65 countries around the world.

Since its inception in 1921, AATCC has dedicated itself to promoting knowledge of dye and
chemical applications in the textile industry, encouraging research on chemical processes and
materials relevant to the industry, and establishing communications channels facilitating the
interchange of professional knowledge and ideas. The organization uses a variety of tools to
accomplish these objectives, including publications, workshops, symposia and the annual AATCC
International Conference & Exhibition (IC&E).

The American Apparel Producers’ Network (AAPNetwork), Atlanta, is a global, non-profit
organization of more than 200 producers of apparel and their 50,000 workers. AAPNetwork promotes
the US apparel industry and helps fulfill worldwide demand for American apparel. The organization
matches sourcing managers, producers and suppliers of apparel and helps locate designers, producers
and support services. The group is funded by annual dues of $1,450 per member. There is a set-up
charge for first-time members.

The American Apparel & Footwear Association (AAFA),  Arlington, Va., promotes its
members’ interests by seeking minimized regulatory, legal, commercial, political and trade
restraints. According to AAFA, the organization represents “the points of view and [pursues] the
concerns of AAFA members before the public and all branches of government to advance the
association’s legislative, international trade and regulatory objectives.” As well, AAFA seeks to
ensure employees in the sewn products industry are treated with fairness, and seeks to create
favorable conditions for the development and exchange of best practices and innovation.

Sewn Products Equipment & Suppliers of the Americas (SPESA), Raleigh, N.C., was
organized in 1990 and represents more than 100 companies that supply the sewn products industry.

The American Yarn Spinners Association (AYSA), Gastonia, N.C., has more than 100 members
representing more than 300 spinning, texturing, mercerizing and dyeing plants in the United States.
The association maintains that its mission differs somewhat from broad-based textile associations
because the marketing system for sales yarn is unique. Yarns are more custom-manufactured than many
other textile products, according to the association; therefore, AYSA limits its role to
opportunities and challenges specific to the yarn spinner. The organization does not become
involved in broader textile issues except when it can “effectively complement or supplement” the
efforts of other organizations.

The Textured Yarn Association of America (TYAA), Gastonia, N.C., has a mission of greater
technological communication within the textured yarns industry. By updating test methods, TYAA
encourages the development of active research and development programs within the industry. TYAA
sponsors a number of technical projects managed by small committees and has semiannual meetings of
its membership. In these meetings, the committees report to the membership at large.

In 2002, the Knitted Textile Association merged with the Northern Textile Association to
form The National Textile Association (NTA), Boston. NTA represents more than 200 textile
manufacturers and industry suppliers with operations in the United States, Canada and Mexico. The
basic mission of the organization is to provide effective representation to government for
fabric-forming companies and to promote the use of American fabrics for apparel, home furnishings,
industrial and other markets.

The Association of Georgia’s Textile, Carpet and Consumer Products Manufacturers (GTMA),
Atlanta, is a statewide trade association that “represents Georgia’s textile, carpet and consumer
products manufacturers in legislative, regulatory and public relations matters.” GTMA was founded
in 1900 and provides resources to its members in the areas of human resources, fiber procurement,
research, energy, health and safety, environmental issues and more. Affiliated with GTMA is The
Textile Education Foundation Inc., which provides funding for scholarships, faculty support,
research, recruitment, capital improvements, and machinery and equipment for the textile, carpet
and consumer products programs at the Georgia Institute of Technology, Atlanta, and Southern
Polytechnic State University, Marietta, Ga. 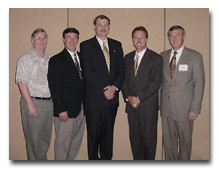 STA’s Board of Governor’s meeting, June 2002 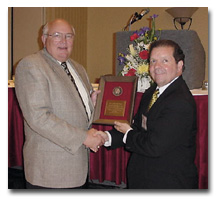 The Southern Textile Association Inc. (STA), Gastonia, S.C., provides its more than 600
members with the opportunity to network with peers to create opportunities and solve common
challenges. Members are from virtually every sector of the textile industry, from yarn spinning to
fabric finishing, including suppliers of fiber, machinery, replacement parts, dyes, chemicals and
services. To localize activities and achieve its goals as much as possible, STA consists of three
geographic divisions: South Carolina Division; Piedmont Division; and North Carolina/Virginia
Division. Meetings are held each spring and fall, and also include an annual full-day winter
seminar that focuses on providing members with timely information related to technology trends and
manfacturing management. The assocation also holds a three-day annual meeting in June.