The newly installed unit — which specializes in the production of HTE’s reactive dyes,
including those incorporating Huntsman’s fluorotriazine (CF3) chemistries — expands HTE’s service
capabilities, particularly in key Asian markets such as India, China and Indonesia, and also will
help ensure that the Mahachai facility remains important globally as a supplier reactive dyes.

“The inauguration of the Mahachai Specialty Synthesis Unit is a demonstration of our
commitment to Thailand as well as our confidence in the growth of the textile industry in the Asia
Pacific region,” said Paul Hulme, president, HTE. “This synthesis unit is the only one in its class
in terms of scale and quality of output which underpins our drive to be a leader in technological
innovation in our industry.” 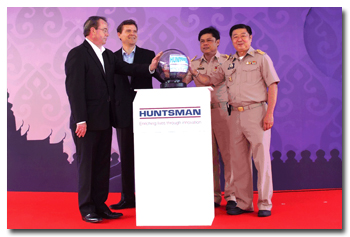 Huntsman has invested a total of $17.5 million over the past five years to upgrade the
Mahachai facility, which, according to the company, features state-of-the-art proprietary
technology that boosts production capacity and efficiency and exceeds strict global environmental
and safety standards. A Formulation Distribution Center also is located at the Mahachai site.