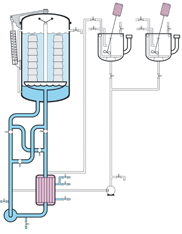 The latest-generation Superflux 4V/CCI + Rapid System from ATYC is used to dye yarn on
cones or bobbins; or in the shape of tops, cable or loose stock.


F
ounded in 1958, Spain-based Argelich, Termes y Cia (ATYC) S.A. is an internationally
recognized designer and manufacturer of jet-dyeing machinery and components whose equipment now is
present in 70 countries. The company has received such accolades as the

Textile World
2004 Innovation Award for its Dual System for Rapidstretch and Technodye machines
(See “Textile Innovation 2004: Technology Driving The Future,
www.TextileWorld.com,, June 2004). Continuing its
commitment to innovation, ATYC recently introduced the Superflux 4V/CCI + Rapid System. The new
system is a latest-generation machine used to dye yarn on cones or bobbins; or in the shape of
tops, cable or loose stock. The system has met with positive marketplace results, according to the
company.

The main characteristics of the Superflux 4V/CCI + Rapid System include the recently introduced
Superflux NE airpad system, a high-performance circulation pump, the ability to work with either a
low (1:4) or high (1:8) liquor ratio, and the new 4V dyebath circulation concept. Thanks to the 4V
concept, the dyebath flow goes directly from the pump to the autoclave with little or no loss of
pressure, which results in an increase in dyebath circulation of more than 30 percent.

This means that with the new Superflux machine, it is possible to reduce power consumption by 30
percent, while still realizing the same results achieved using conventional modern machines. This
faster dyebath circulation flow through the packages thus shortens the dyeing process.

If it is necessary to work with the same flow, as is the case with conventional dyeing machines,
a frequency converter may be utilized so the pump will consume less energy. Saving power or time
and reducing dyebath volume will reduce the cost of dyeing. 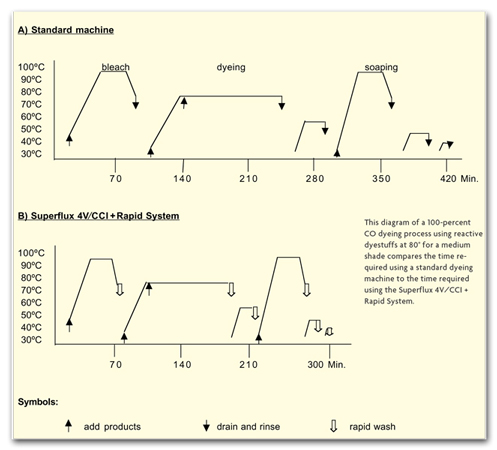 The new model also incorporates the CCI + Rapid System. The system fills and drains by means of
a pump, and the process is enhanced by a Rapid Rinsing program that operates according to the
number of liters or to the time required to complete the task. This high-performance system thus
reduces processing time, according to the company. As the machine fills with clean water at low
pressure, the autoclave automatically drains the dirty water, without recirculating the dirty water
back through the pump.

The CCI system features an integrated dye kitchen that uses two tanks equipped with the
necessary elements to prepare and automatically add the dyestuff and chemical products. This system
eliminates the necessity for a separate dye kitchen. Both tanks use the MODATYC system for linear
or exponential mode addition of dyebath chemicals. One of the tanks may be used to automatically
dissolve and add in salt or sodium sulfate.

ATYC reports it is possible to achieve high-quality dyeing and significant cost savings using
the Superflux 4V/CCI + Rapid System because of the shortened processing time and reduced power
consumption.