Incoming textile and apparel shipments seem to again be on the increase. In the first quarter 2015, for example, volume totals were running better than 7-percent above the previous year — thus continuing the advances reported during 2014 when imports sported an almost as large 5-percent increase. Even when it comes to China, modest shipment gains now seem to have replaced an earlier flattening out. All this raises a key question: Do these latest numbers point to a new round of big import gains, or is it all just a short-term aberration? TW feels it’s the latter, blaming increases on two temporary factors — recent significant gains in the value of the dollar and a rising gross domestic product (GDP) trend. On the dollar score, recent strength has tended to lower prices for American buyers of textiles and apparel. But now, there are signs that the dollar may be losing some of its buoyancy. Next, consider the relatively strong economy. Recent GDP gains have undoubtedly beefed up demand. But here too, there are signs of change. True, GDP is still rising. But any new gains won’t reach the 3-plus rate that many analysts had been predicting for the current year. Nor are recent Wall Street gains — another purchasing power plus — likely to continue. Finally, some attention should be paid to a few long-term developments that would also seem to point to putting a lid on imports. The two most important of these: More U.S. manufacturing interest in reshoring and continuing double-digit increases in foreign supplier labor costs. 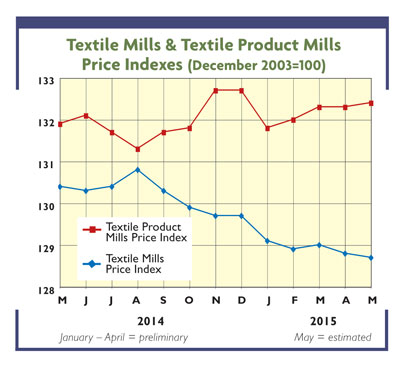 The Reshoring Impact
Looking first at companies returning production to U.S. shores: Up until recently, the evidence on this score had mostly been anecdotal. Not so anymore. A.T. Kearney, a major global consulting firm, provides a lot more solid proof of this trend and the textile industry’s involvement in it. The firm’s latest reshoring study finds that 12-percent of the more than 700 companies in Kearney’s reshoring database are now in the apparel sector. That’s only slightly fewer than the 15-percent readings noted for both the transportation equipment and electrical machinery/appliance sectors. Kearney analysts also note that apparel participation was much higher than they expected. Commenting on this, one key apparel executive adds that reshoring is making more and more economic sense — noting that the foreign price advantage usually given for choosing an overseas supplier can be quite misleading. The reasoning: A lower base price isn’t always better. That’s because to get a cheaper foreign quote in the Far East, one often is forced to opt for large production runs. These runs are so big that companies often end up with lower sell-through rates, so low that the imported goods has to be unloaded at cut-rate prices. Moreover, there are a lot of other factors cited for considering domestic production including quality enhancement, faster turnovers, better brand image, and the growing preference on the part of American consumers to buy made-in-U.S.A. products — even when such products cost a bit more.

The Labor Cost Impact
As noted earlier, our projections for an eventual leveling off in imports also is based on rapidly rising foreign supplier labor costs. To be sure, talk of completing eliminating the still rather substantial U.S.-overseas pay differential is little more than wishful thinking. As such, a large percentage of the industry’s lost markets will never return. On the other hand, it’s evident that this pay gap has narrowed to the point where it’s now a lot more likely that domestic manufacturers will consider additional U.S.-made production, particularly in areas where niche-type products are involved. Moreover, if there’s any doubt on the extent of this changing labor cost picture, just compare recent American and competing overseas pay rate trends. The numbers show that the U.S. hourly compensation rates for both textile and apparel companies have inched up less than 2-percent annually over the past five years. That’s actually less than offsetting productivity advances — thus indicating that the textile industry’s unit labor costs actually have been edging lower. Compare this to the steady tattoo of double-digit increases reported in China, and most other Far Eastern supplier countries in recent years and it’s easy to see why American producers are increasingly taking new hard looks at their overall global sourcing strategies.