How well are the U.S. textile and apparel industries doing these days? And more specifically, what kind of grade do they rate — A, B, C or D? The answer, of course, depends on whom you talk to. There are, for example, still a few prophets of doom and gloom who see the glass as half empty rather than half full with little hope of recouping the big losses of previous years. On the other hand, TW editors and most industry analysts view things in a much more favorable light — citing increasingly positive signs in such key areas as: (1) demand, which is being sparked by an improving macro-economic climate and the introduction of more and more niche products; (2) costs of production, which have actually been trending lower; and (3) earnings, which have been increasing steadily. On this last point, current profit numbers are a lot better than they were a few years back when many U.S. firms were either close to their break-even points, or experiencing some actual losses. More about all these upbeat developments below.

Improving Demand
The good news here is that year-to-date mill and apparel shipments are running better than 2-percent above comparable year-earlier readings. And little change is anticipated as 2014 draws to a close — assuming of course that latest projections calling for a solid 4-percent jump in holiday buying is anywhere near correct. As such, 2014 should be one of the few times in recent memory that industry totals have ended up in the plus column. To be sure, this expected increase is still far under the impressive gains currently being reported in some high-tech areas. On the other hand, the textile and apparel industries’ growth should pretty much match the U.S. overall economic gross domestic product increase, which for 2014 is put at around 2.5 percent. It should also be noted that this anticipated overall textile and apparel advance is even a bit larger than that being projected for all nondurables — a combined group containing, in addition to textiles and apparel, a representative mix of normal growth industries like chemicals, paper and plastics. In any event, it clearly no longer makes sense to include the textile and apparel industries in any up-to-date listing of shrinking industries. 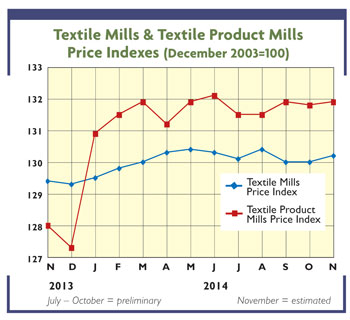 Better Cost Performance
There’s now increasing evidence that our industries’ production costs actually have been falling over the past two years. On the labor front, for example, productivity — now rising at a better than 3-percent annual rate — has been more than able to offset small hourly pay hikes. The implication is clear — namely that labor costs per unit of output are now actually edging lower. The productivity role is further highlighted by the fact that our mills at last report were spending more than a billion dollars a year for new, more efficient plants and equipment. And even more significant as far as overall costs are concerned has been the recent declines in fiber tags. In manmade, this is due to both overcapacity and weaker petrochemical feedstock tags. As for cotton, reduced costs pressure is traceable to both to recent bumper crop years and a growing inventory overhang. In any event, overall fiber outlays now are far under where they were a few short years ago. To sum it all up, the cost element of a typical textile and apparel shipment dollar has probably fallen a lot more than in most other manufacturing sectors.

Stronger Bottom Lines
Factor in all the above, plus relatively stable selling prices, and it should come as no surprise that U.S. mills now are more than holding their own as far as earnings are concerned. Latest available after-tax profits (Q2 2014) were running close to 50 percent above a year earlier. That’s far better than the 6 percent gain noted for all U.S. manufacturers and the relatively flat pattern reported for all nondurables. And it’s basically the same story when zeroing on profit margins. Domestic mills after-tax profits per dollar of sales, for example, now are put at near 7 percent — again well above the 5 percent return noted a year earlier — with similar gains noted when profits are compared to stock holder equity. These latest margins also are a lot higher than noted just before the recent great recession. And the future could well see more overall profit improvement, with major economic consulting firm IHS now projecting additional gains for 2015, 2016 and 2017. In short, the textile and apparel industries have come a long way over the past few years — enough to ensure they’ll remain significant world-class producers through the foreseeable future.