There’s increasing evidence that domestic textile mills are again beginning to shell out
substantial dollar amounts for new plant and equipment. A new government report tells the story: It
finds that U.S. firms invested $1.2 billion in 2011 — the latest year for which data are available.
That’s a solid 9-percent jump over the $1.1 billion spent the previous year. Moreover, compared to
2009, the latest number is up by an even more impressive 27 percent. In any case, this marks a
dramatic reversal from the huge 30-percent-plus tumble recorded in 2009, the low point of the
recent business downturn. And virtually the same improving capital outlay pattern is noted for the
U.S. downstream apparel sector, where the latest annual increase came to near 23 percent. It might
also be pointed out that all these recent capital spending increases are not that different from
those recorded for all U.S. manufacturing. That’s not to say, of course, that these latest business
investment numbers are anywhere near the peak levels of a decade or so ago. But that’s only to be
expected. Indeed, to put this spending in perspective, capital outlays should be compared to
overall industry revenues. And here, the picture also quite encouraging. At last report, for
example, U.S. textile mills were earmarking a solid 4 percent of their sales dollars for new plant
and equipment. Not only is this close to levels prevailing before the recent recession, but it’s
also above the 3.5-percent level now being reported for all U.S. manufacturing. 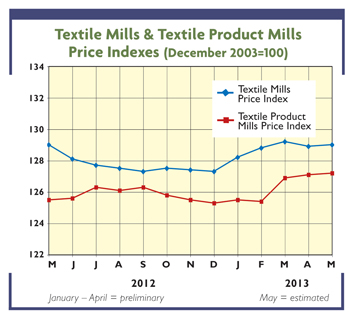 
Nor are all the above reports the only indication of strengthening industry investment. Also
pointing in this direction is the pickup in domestic textile machinery demand — with the latest
production numbers here ranging a strong 25-percent above their 2009 low point. And if further
proof of a rising capital spending trend is needed, it comes from a new National Council of Textile
Organizations (NCTO) survey indicating that an impressive 23 new American plants have come
on-stream over the past three years. True, some of these new installations are aimed at replacing
older, less-efficient ones. But, as noted in last month’s column, all this new investment also
seems to be both halting the precipitous decline in industry capacity noted over the past few
decades, and helping to maintain the industry’s record for solid 3- to 4-percent annual
productivity gains. This latter trend, in turn, offers still more evidence that the U.S. is
becoming a lot more competitive in today’s global marketplace. And virtually all U.S. executives
would pretty much agree. In fact, there is now a solid consensus that the domestic industry is well
on the way toward becoming a lot leaner and meaner. Couple this with the increasingly hefty labor
and material cost increases now being faced by the United States’ major overseas competitors and a
modestly improving economy, and it’s making for a major shift in industry thinking — one that
exudes confidence that the industry will not only survive but actually prosper in the years ahead.


Meantime, another good hard look at import strategies seems to be in order. It’s becoming
increasingly clear, for example, that relying solely on China — now faced with labor shortages,
annual double-digit pay increases and ecological pressures — may no longer be the way to go. Nor
does switching to such developing nations as Cambodia, Vietnam, India, Pakistan and India offer
sure-fire alternatives. Reason: Not only do these countries also face sharply rising costs, but
also they present big new question marks vis-à-vis worker safety. Witness, for example, the recent
tragic Bangladesh building collapse. It has already forced many large American apparel firms to
reevaluate their overall sourcing plans — and with good reason. Thus, aside from the public
relations problems that such disasters raise, there’s a realization that it will take billions of
dollars to raise many of these countries’ garment factories to anything even near Western safety
standards. In any event, large U.S. buyers like Walmart and Levi Strauss are now increasingly
questioning the feasibility of putting too many of their procurement eggs in these countries’
baskets. Then, too, there’s always the fear that buyers’ ever-increasing emphasis on cost
containment, speedy turnarounds, and zero mistakes could precipitate a lot of other Bangladesh-type
debacles. Finally, factor in such other important sourcing factors — including today’s vastly
cheaper U.S. energy costs as well as its superior reliability and quality — and some modest shift
to more reshoring could well become a more viable option.