What a difference a year or so makes. Cotton quotes, which had skyrocketed in early 2011 to well
over $2 per pound, are now hovering in the low, well-under-$1-per-pound range. The latest U.S.
Department of Agriculture supply/demand estimates provide the details behind the huge decline.
Global production over the new 2012-13 marketing year beginning this month, for example, is put at
more than 115 million bales. That’s well above expected usage, which is targeted to reach only 109
million bales. Compare the two numbers, and it’s easy to see why stocks at the end of the marketing
year look to jump by nearly 9 percent — to more than 72 million bales. Equally important, this
means that the widely watched stock/usage ratio — a bellwether indicator of market trends -will
soar to near 66 percent at that time. That’s far above the low 40-percent reading recorded as
recently as 2009-10. Zero in on comparable U.S. numbers, and the picture is pretty much the same —
with the projected 2012-13 stock/usage ratio coming to 31 percent — more than double that reported
only two years earlier. Given all the above, it’s hard to justify any appreciable cotton price
recovery. To be sure, there could be a few rallies, but they’re likely to be modest and temporary.
Nor are any problems anticipated in the other major fiber area — man-mades. True, the government
price index here shows tags running some 4-percent ahead of a year earlier, but that’s hardly
earthshaking. Moreover, there are even a few areas of weakness. The polyester fiber reading, for
example, has slipped more than 3.5 percent vis-à-vis a year ago — with spun synthetic yarns off by
an even larger 6.5 percent. Finally, even wool quotes have tended to ease a bit compared to 12
months ago. In short, mill material costs are now pretty much under control. 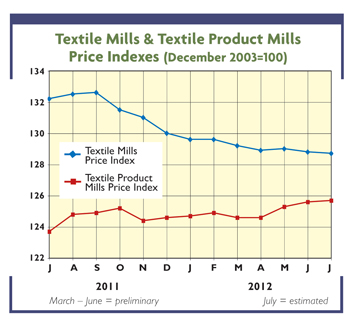 
This changing material cost picture is also having a strong positive effect on the U.S.
industries’ financial health — primarily by lowering the proportion of the revenue dollars
earmarked for this key production input. Thus,

Textile World
figures show that during last year’s cotton price run-up, material outlays for companies
making basic products like fabric accounted for a hefty 74 percent of each revenue dollar. This
year, however, the figure is expected to slip to near 72 percent. And it’s pretty much the same
story for both more highly fabricated mill products like home furnishings and carpets, and apparel
-with last year’s 67-percent and 61-percent ratios each falling about four or five percentage
points. More importantly, these cost trends are expected to continue into next year.

TW
editors, for example, see material cost/revenue ratios declining even further in 2013 — to 62
percent for basic mill products, 44 percent for more highly fabricated mill items, and 45 percent
when it comes to apparel. These are clearly not insignificant declines. Indeed, they pretty much
support

TW
‘s feeling that industry profits and margins will improve not only in 2012, but in 2013
as well.

Some Thoughts On Prices


Prices, too, are contributing to overall industry optimism. One might think that recent
declines in production costs would lead to some pressure on buyers to lower tags. But so far,
there’s been precious little evidence of this happening. Indeed, quotes on some key sectors like
finished fabrics and apparel have actually continued to inch up. And again, all indications suggest
this pattern will persist through the foreseeable future. One key reason: Fairly solid domestic
demand is helping reduce the need for discounts and other price concessions. Note, for example,
that over the past year, purchases of home furnishings, carpets, and apparel have all outpaced
year-ago levels. Moreover, the positive demand impact on pricing is being reinforced by recent
small declines in domestic excess capacity — as production potential continues to shrink. Still
another price-bolstering factor: The gradual narrowing of the U.S.-overseas price gap. Other things
being equal, this is calculated to strengthen domestic producer pricing clout. Strong confirmation
of this shrinking gap comes from recent textile and apparel import price hikes — increases that
have tended to outpace any relatively fractional ones posted by domestic firms. Throw all of the
above into the computer hopper, and it suggests some modest upward revisions in

TW
‘s earlier 2012 price forecasts — with the following increases now projected: 3 percent or so
for basic mill products; 1 percent for more highly fabricated ones; and 1 to 2 percent for apparel.
And for 2013, odds still favor firmness, with, again, a chance of some modest advances.