All signs point to improving 2012 bottom-line performance for the U.S. textile and apparel sectors.
Credit the anticipated earnings gains to a combination of factors — including some modest
improvement in consumer demand, sharply lower cotton costs, and prices that are now running
significantly higher than a year ago. A just-released forecast by Global Insight pretty much
reflects this brightening outlook. On the basic textile mill front — mainly, fibers and fabrics —
for example, analysts at this prestigious economic consulting firm see 2012 earnings jumping an
impressive 36 percent. And by 2013, another good gain is projected — with earnings rising above
levels prevailing in 2010, just before cotton quotes went through the roof. Even more significant,
this expected profit increase actually represents an improvement over the one Global Insight
presented just three months ago. At that time, a somewhat smaller 30-percent profit pickup was
being forecast for the current year. And the picture is equally upbeat for more highly fabricated
mill products like home furnishings and carpets — with solid gains anticipated for 2012 and 2013.
That’s again enough to push profits above pre-cotton-run-up 2010 levels. There’s even some good
news for the United States’ hard-pressed domestic apparel industry — with increases once again
expected to bring earning totals back above 2010 levels. In short, things are beginning to look up.
Or, put another way: There’s finally some light at the end of the tunnel. 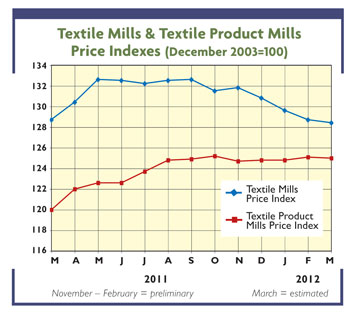 
As suggested above, much of the brighter profit picture just outlined can be attributed to
lower costs and firmer prices — a combination that is resulting in a diminishing cost-price
squeeze. The squeeze reached its height a year ago, when cotton, which accounts for as much as 40
percent of many clothing makers’ costs, spiraled to more than $2 per pound — more than double that
of a few months earlier. True, prices moved up in response, but not nearly enough to redress the
balance. The result: last year’s substantial profit declines. But now, the situation has improved
substantially. Cotton has returned to near its pre-run-up levels, and both textile and apparel
prices are currently running better than 5 percent above year-ago levels. More importantly, odds
are this improved scenario will continue for some time. On the cost front, for example, early 2012
cotton production reports would seem to suggest an ample supply of this key fiber. And as for
prices, while some discounting could well crop up as the year progresses, overall 2012 tags should
manage to pick up some additional small gains. Right now, for example, basic textile mill product
prices could move up another 2 to 3 percent. Factors behind this relatively upbeat price forecast
include: somewhat less competition from imports, where high costs continue to plague overseas
producers — especially in China, where double-digit pay hikes are often the norm; and better
overall demand. On the latter score, U.S. textile mill activity this year, after correcting for
inflation, looks to be up about 1 to 2 percent — making for the third straight year of small gains.


A Longer Look Ahead


Go out a few more years, and again, the outlook doesn’t seem all that bad. To be sure,
today’s basically small mill and apparel output gains may eventually peter out. On the other hand,
there’s little to suggest any further major shrinkage — certainly nothing like some of the
double-digit declines of the past decade. Global Insight’s further-out 2014-16 projections, for
example, point to only small annual production falloffs for both basic textile mill products — 3
percent — and apparel — 4 to 5 percent. And there could be some fractional gains for more highly
fabricated textile mill products over this extended period — primarily because of an expected
housing pickup at that time. All of the above are numbers the industry could live with, given both
an improved cost-price structure, and the continuing development of new, improved and more
profitable niche products that should be coming on stream over the next few years. All this shows
up in Global Insight’s newly revised profit projections for this period. In all three subsectors,
earnings are expected to remain the same or even move slightly ahead of those projected for 2012
and 2013. True, such more-distant forecasts are always more iffy than those made for the next year
or two. But statistically speaking, based on all of today’s available information, they point to
the most likely results. And no matter how you slice it, that’s a positive sign.