Textile World
‘s editors to roll out the crystal ball and take their annual look at domestic textile and
apparel industry trends — where they’ve been, where they are now, and what’s likely to happen over
the next few years. And the picture revealed this time is quite encouraging. Put succinctly, the
U.S. industry has managed to survive more than a decade of soaring imports, the biggest business
downturn since 1929, and what can best be described as a relatively sluggish economic recovery.
More importantly, the prognosis is quite good. U.S. textiles and apparel have managed to turn
things around despite lingering problems. Witness the back-to-back shipment and production gains —
albeit small — reported over the past two years. It’s the first time this has happened in well over
a decade. Moreover, this broadly based and basically upbeat trend now looks not only to spill over
into 2012 but also to continue through 2016. All the pertinent details are contained in 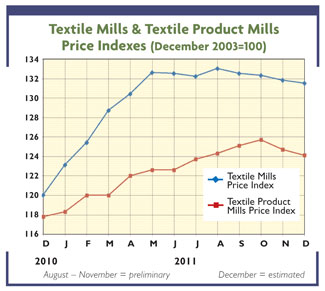 The key point to emphasize: The evidence is strong and convincing for continuing improvement
in all areas of the industry — including demand, productivity, import levels, costs, prices,
logistics and strategic planning. Not surprisingly, these trends should also help bolster profits.
Indeed, if all goes according to plan, mill sector after-tax earnings by 2013 could be back to, or
even surpassing, pre-2007 levels. To sum up,

TW
‘s editors are almost unanimous in their feelings that U.S. textile and apparel companies
have turned the corner and are here for the long haul.

TW
alone in predicting better days ahead. Global Insight, a prestigious economic consulting firm
with a good track record on calling textile and apparel trends, has come up with numbers that are
not all that different than

TW
‘s. Then, there are recently revised business growth figures — with the Federal Reserve
Board, overseas organizations like the Organisation for Economic Co-operation and Development, and
most private U.S. economists calling for 2- to 2.5-percent growth for 2012. Informal talks with
textile and apparel executives also point to growing confidence. Indeed, virtually all now agree
that 2012 should turn out to be a tolerably good year — with perhaps some modest growth in niche
and new product markets. In any event, the fact that these executives are still willing to invest
close to $1 billion a year in new plant and equipment seems to confirm, if nothing else, that they
mean what they say. More on this capital investment in a month or two when results of an updated
Washington survey on plant and equipment spending are released.

Meantime, all available evidence suggests another year of strong spending for new machinery
and facilities. And that’s something that should not be underestimated, for it seems to guarantee
continuing 2- to 3-percent annual efficiency gains — enough to shore up the U.S. industry’s overall
competitive position and assure it remains a world-class producer through the foreseeable future.

A Question Of Accuracy

TW
‘s projected numbers will be 100-percent accurate. That’s pretty much an impossible goal
given the dozens of variables that impact industry performance. Moreover, many of these
determinants interact with one another, making pinpoint forecasting even more difficult. As such,
any projections that come within 1 percent or so of actual results can clearly be considered a
success. Using these criteria,

TW
‘s 2011 forecast has pretty much been on the money. At the time, mill shipments were
expected to rise not only because of modest demand uptick but also because of higher prices. And
that’s exactly what happened — with the 2011 total in dollar terms up 6 percent, but less than half
that percentage in real or physical terms. Similarly,

TW
‘s prediction calling for a small rise in mill operating rates was right on target. Also
projected was a topping out of industry imports from China. And that, too, came to pass, with
overall overseas purchases dropping 3 percent. Indeed, profits were the only area where

TW
was off-base. But that was only because of last year’s huge cotton cost hikes. However, with
that fiber back to more normal levels,

TW
sees mill earnings bouncing back up to their pre-cotton-cost-run-up projected levels —
probably by 2013.