Soaring cotton costs — now more than double year-ago levels — continue to plague the U.S. textile
and apparel industries, with still no definitive answer as to when the price bubble will burst.
Clearly, no immediate relief seems in the offing as today’s big supply-demand imbalance drops
domestic inventories down to 1.9 million bales — some 35 percent under levels prevailing four years
ago. On the other hand, there’s a good chance for some price easing as the year draws to a close,
primarily because sky-high quotes are resulting in significantly higher 2011 plantings. The
National Cotton Council sees a 14-percent increase in domestic acreage this year, probably enough
to yield about a 19.2 million-bale crop — some 900,000 bales more than last year. Equally
important, all signs point to similar upbeat harvest trends in other cotton-producing nations.
Given average growing conditions, this would suggest close to a 7-percent increase in global output
— enough to make for a somewhat improved supply-demand situation. 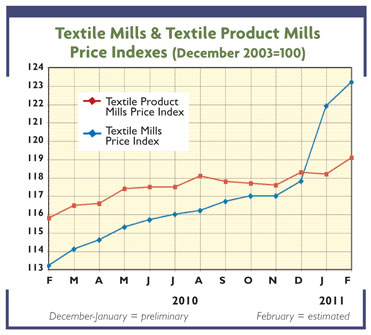 
Speculation also has to be blamed for some of today’s cotton woes. But, here too, there are
signs of better days as the year wears on. The Intercontinental Exchange Inc. is finally increasing
its monitoring of big positive positions and demanding evidence that major market participants
prove they have an economic need for the fiber. Hopefully, this will moderate overall demand and
eventually nudge prices lower. Meantime, hoarding has been rampant in China, where that nation’s
farmers are said to be holding onto as much as 9 percent of the world cotton supply in hopes of
getting a higher price for the fiber. But this kind of strategy also has its limitations, because
sooner or later, this cotton will have to come back on the market. Finally, there’s a third kind of
speculation worth noting — namely, an increasing buildup of cotton-containing products. Many
producers and distributors of these items are increasing their inventories as a hedge against
further procurement cost increases. And here, too, the buildup will eventually be reversed. And
when it is, it should also help bring cotton down to more realistic levels.


But until the cotton bubble actually bursts, it’s going to be rough going for most textile
and apparel firms — a lot worse than over the past few quarters, when most fabric and garment firms
were able to rely on fiber previously committed for at well under $1 per pound. Hence, a growing
number of new price increases are currently being announced. To be sure, they’re not nearly as
large as those posted for cotton. But that’s not just because cotton accounts for only part of a
textile product’s cost, but also because of increasing substitution of man-made fibers for cotton
and strong buyer resistance. Nevertheless, current and anticipated price boosts still are likely to
be quite substantial, with

Textile World
now projecting anywhere from a 5- to an 8-percent increase in overall textile and apparel
tags for the current year — close to double the advance predicted at the beginning of the year and
well above the nation’s expected 1- to 2-percent overall inflation rate.

Impact On Imports And Profits


There are also likely to be other fallouts from today’s sky-high cotton tabs. U.S. imports of
Chinese textile and apparel products could be affected — primarily because that nation’s producers
may be forced to raise prices even more than their competitors. Such hikes are needed to reflect
two other upward cost pressures — a slowly rising currency and intensifying Chinese internal
inflation. These additional costs could add as much as another 10 percent onto Chinese-made
products. Not surprisingly, Chinese asking prices have jumped to the point at which more and more
U.S. buyers are considering a shift in sourcing — away from Beijing and toward the now-cheaper
offerings of other developing countries. There’s already some evidence of this, with imports from
China beginning to show smaller year-to-year advances. Finally, a few words on cotton and its
impact on bottom lines:

TW
feels 2011 profits and margins may be a bit lower than previously anticipated, reflecting
less-than-full-cost pass-throughs and consumer resistance to higher prices. There will be more
about this next month when updated earnings projections become available.