T
here’s a modicum of good news to help offset still-falling textile and apparel demand —
namely the fact that basic materials going into these products are actually going down in price.
And these new declines are pretty much across the board. In man-made fibers, for example, excess
global capacity and declining petrochemical feedstock costs have helped push the average tab — as
measured by the US Bureau of Statistics — down by a significant 4.5 percent over the past year,
with most of the slippage noted over the past few months. And there’s little to suggest any
meaningful near-term turnaround.

There is also some good news on the cotton front, where prices for the raw fiber, when
compared to early last year, are off by more than 30 percent. Moreover, given the latest
supply-demand projections of both Cotton Incorporated and the US Department of Agriculture, tags
here are likely to remain soft through the foreseeable future as world stocks hold near current
high levels.

Quotes on the other major natural fiber, wool, have also been trending sharply lower as of
late. At press time, for example, both domestic and overseas wool prices trailed year-ago levels by
anywhere from 30 to 40 percent.

Bottom line: All these declines can’t help but have some positive impact on the textile
industry health, especially given the fact that raw material costs in the basic textile sector,
including yarns and fabrics, account for close to two-thirds of every sales dollar. The
raw-material role for more highly fabricated textile products also is quite significant, with
fibers and other material imputs representing about 55 percent of the finished product’s value. 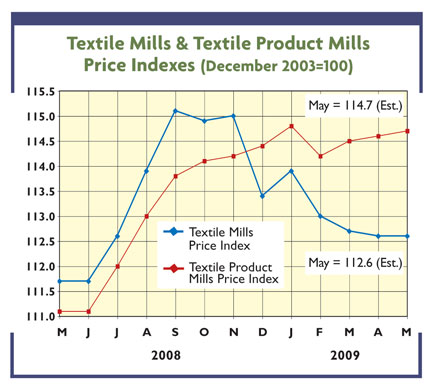 Other Costs Also Under Control


Labor isn’t presenting any cost problems either. Over the past 12 months, for example,
hourly rates for basic textile products advanced only about 2.5 percent — a number more than
balanced out by a nearly 3.5-percent decline in the more highly fabricated textile products sector.
Indeed, average those numbers out and adjust for continuing productivity gains, and the industry’s
overall unit labor costs have probably inched a bit lower.

Similar situations also seem to be shaping up in other cost areas. Take transportation:
True, no individual textile numbers are available, but the fact that the nation’s aggregate
trucking rate actually declined suggests mill freight costs are under control.

Finally, there are inventory carrying charges — another big industry cost drain. Here, too,
problems seem to be minimal, thanks to the combination of today’s low interest rates and the
industry’s continuing ability to keep inventories at relatively low levels.

To sum up then: Overall mill production and distribution costs are now probably at, or even
a bit under, where they were last year. And this could well by why, despite continuing production
declines, most US firms are still able to show some profit. Textile World will report more about
the earning pressure in a month or so when first-quarter 2009 figures become available.


The prognosis for a bottoming out in overall economic activity also has to be regarded as an
industry plus. To be sure, any actual upturn in gross domestic product (GDP) is still a few
quarters away. But clearly the worst is over. Federal Reserve Bank Chairman Ben Bernanke, for
example, notes a wide array of encouraging signs. These include the better-than-2-percent jump in
consumer spending over the first quarter, steadying sales of new and existing homes, the modest
revival in credit markets, and the recent huge drop in business inventories.

On the latter score, the industry stockpiles have been dropping 2.5 times as fast as sales
since the beginning of the year. A decline of this magnitude can’t help but clear the way for at
least a modest resumption in GDP growth toward year’s end as companies boost production to levels
that are in better balance with sales. Still, other positive trends would have to include the
bottoming out of basic material prices, a sign that there’s still demand for commodities used in
industrial output; the stock market gains of recent months; and the turnaround in consumer
sentiment — with people now a bit more upbeat about the economy and the job market.

Bottom line: All of the above can’t help but have a positive spending impact — on textiles
and apparel as well as all other major consumer sectors. Zeroing in on domestic mill activity, for
example, TW editors now see decelerating production and shipment declines over the remainder of the
year, with perhaps even the possibility of some scattered small gains by early or mid-2010.