T
he current business slowdown, combined with continuing strong import competition and
rising material and transportation costs, is beginning to take its toll on textile earnings.
Industry profits and margins, for example, were down significantly during the year just ended, and
some further modest erosion seems to be pretty much unavoidable for 2008. At least that’s what

Textile World
‘s forecast equations are now suggesting, and they’re being backed up by new numbers just
released by Global Insight, one of the nation’s most prestigious economic consulting firms. That
company’s rough measure of profits – dubbed “margins,” which are basically sales less labor and
material costs – point to further declines in both the basic textile and textile product sectors.
Look at basic textiles first, and the Global Insight margin is seen dropping another 6.5 percent
this year – all on top of last year’s almost as hefty 6-percent slippage. In the more highly
fabricated textile product sector, analysts at the consulting firm see last year’s 8.2-percent
decline followed by an even bigger 10.2-percent drop in 2008. On the other hand, the outlook for
the following two years is a bit more unclear, with profit numbers at that time – though still on
the decline – beginning to flatten out in both sectors of the industry.

Falling demand, as indicated above, will be a major factor behind much of this year’s
relatively disappointing profit performance. Again, the new Global Insight projections tell the
story. Domestic sales of basic textiles, for example, are expected to decline another 4.2 percent
this year to $33.4 billion. From a longer-term perspective, that’s a huge 22-percent fall from
levels prevailing as recently as 2003.  And the picture is much the same for more highly
fabricated textile products, where a 9.1-percent decline this year, to $30.6 billion, is now
anticipated. It might also be pointed out that these declines are somewhat larger than those
suggested in

TW
‘s January beginning-of-the-year outlook feature – in large part because the current US
economic slowndown is proving to be a great deal steeper than anticipated at that time (See ”
Textiles 2008: Blueprint For Survival“). On a somewhat more rosy note, however,
2009 should see some flattening-out in demand. Indeed, just as in the case of profits, domestic
industry sales numbers are expected to look a little better in both segments of the industry. 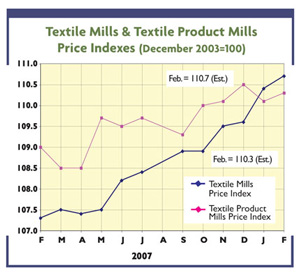 Another encouraging sign: The sharp declines in textile demand and profits over the 2007-08
period do not seem to have spread to the domestic apparel market. Industry apparel sales this year,
according to Global Insight, are actually expected to edge up 1.6 percent – more than making up for
2007’s small decline. And this year’s domestic apparel margins are targeted to rise – perhaps by as
much as 10 percent. Summing up then, for the entire textile/apparel industrial complex: Things
aren’t really all that bad. Indeed, if the bottom doesn’t drop out of the economy, domestic sales
of combined textiles and apparel for 2008 should remain in the respectable $97 billion range – off
only about 4 percent from last year. Moreover, go beyond 2008, and into 2009 and 2010, and the
outlook seems far from bleak, with overall textile and apparel sales remaining in the
$90-billion-plus range through this period.

Latest government import reports also provide grounds for some optimism. Example: For the
first month in many years, incoming Chinese shipments of textile and apparel fell below year-ago
levels. True, winter storms in that nation interfered with deliveries and one month does not make a
trend. On the other hand, there are other signs – namely, higher Chinese production costs, a big
jump in that nation’s anti-pollution outlays, and less overall subsidization of Beijing’s shipments
– that may all be playing a role. As such, while further gains in imports from China over the next
few quarters are still likely, they are likely to be considerably smaller than those noted over the
past few years. Another encouraging sign: The latest figures on textile and apparel imports from
all countries has also slipped into the negative column when compared to a year ago. Again, this
could be a temporary phenomenon. But on the whole, it now looks as if the total 2008 gain will be
quite modest – probably something in the 2- to 4-percent range. But one caveat – new restraining
moves will be necessary soon to prevent another surge in 2009, when all remaining Chinese quotas
are scheduled to be removed.