S
ome good news to go along with the bad: Domestic profits, despite earlier fears of a
sharp decline, have remained surprisingly firm. Latest government figures for the first half of
2005 put the industry’s after-tax margin at 3.15 cents per dollar of sales — up a bit from
year-earlier readings. Earnings in dollar terms are up by comparable amounts. Behind the trend are
better cost controls, more savvy management, increased global outsourcing and more concentration on
profitable niche markets.

Less bullish, however, are reports of slowly declining domestic mill activity. Just-released
figures show textile mill production running about 3 percent under year-ago levels. Mill sales are
down by about 6 percent.

Not all industry segments seem to be feeling the pinch to the same extent. New numbers for
the basic mill sector suggest a disturbing 12-percent decline from last year. On the other hand,
the more highly fabricated mill product sector has been holding up a lot better, with the numbers
here running fractionally above a year ago. 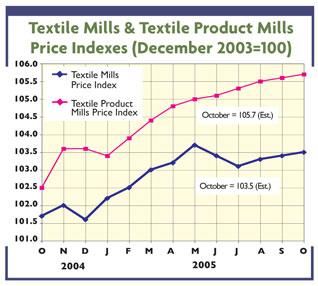 The same pattern is expected to persist into the new year. Economic forecasting firm Global
Insight sees revenues of basic fibers and fabrics falling 6.5 percent in real or volume terms —
with the drop-off in the mill product area put at a modest 3 percent. In the highly fabricated
product sector, Global Insight sees the possibility of a fractional improvement in profit margins.

While by no stretch of the imagination can all these projections be described as bullish,
they do indicate the domestic textile industry isn’t about to disappear. To be sure, it may be
shrinking, but stronger companies will continue to survive and even prosper in today’s competitive
one-world market — despite the continuing inroads of cheap imports from China and other Far Eastern
nations.

The recently inked US-Chinese three-year trade deal should help remove some of the nervousness
and uncertainty that have been plaguing domestic textile and apparel markets over the past year or
so. Not everybody is happy about the agreement — many claim it gives away too much. The National
Council of Textile Organizations, Washington, still views it as an important positive step — noting
that US industry will now know with certainty that China will be unable to flood the market during
the next three years. A spokesman for the group also pointed out that we are retaining our right to
use safeguard quotas should Beijing start flooding the market in categories not covered by the
agreement.

The new bilateral pact limits US import growth in 34 vulnerable clothing and textile
categories. Annual growth of 10 to 15 percent will be allowed during the first year, 2006 — with
the precise advance depending on specific product category. This growth rate should accelerate a
bit to 12.5 to 16 percent in 2007 and 15 to 17 percent in 2008.

Even with this new, comprehensive US-Chinese agreement, it would be unrealistic to expect
anything approaching a return to the quota-restrained import levels of past years. The relatively
high import growth rates just cited would certainly preclude such a bounceback. Equally important
is the feeling that Beijing isn’t about to allow for any major rise in its currency — a move that
might make Chinese goods more expensive. Many now say that even if the yuan did rise appreciably,
it’s doubtful whether major import relief would be forthcoming. Indeed, these doubters feel China’s
cost advantage over the United States would remain fairly impressive even if the yuan were to climb
20 percent against the dollar. Moreover, to the extent China would lose some of its competitive
edge, other low-cost producers in Asia and Latin America would probably pick up most of the slack.
Upshot: While most world-class US firms are likely to survive, their portion of the overall
domestic market seems all but certain to continue falling. Generally speaking, declines will tend
to be the most precipitous in the apparel rather than the textile sector — with perhaps domestic
slippage of 5 percent or more in real or volume terms likely over each of the next three years.