D
omestic mill activity is holding up well despite the flood of imports from China and
other countries. Based on results for the first three quarters, overall 2005 production and
shipment totals for US mills won’t be down all that much vis-à-vis year-earlier levels. Part, of
course, reflects continuing economic growth.

Even with Hurricane Katrina’s negative effects, the nation’s overall 2005 gross domestic
product advance is estimated at around 3 percent. This, accompanied by still-growing employment and
incomes, is helping keep consumer spending on apparel and other textile products strong enough to
keep the domestic textile industry afloat.

Analysts at economic forecasting firm Global Insight see only a 4.8-percent decline in basic
textile mill revenues for 2005. And when it comes to the textile product sector, the forecasting
group anticipates a fractional 0.6-percent gain.

Prices, too, haven’t been faring badly and clearly haven’t experienced the catastrophic
tumble that many predicted following the junking of quotas this past January. Indeed, using Global
Insight’s latest projections, 2005 textile mill, mill product and apparel quotes are all seen
ending up within 1 percent or so of their 2004 averages. 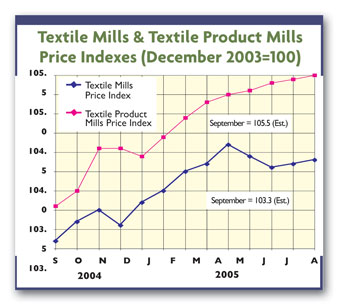 Nor are current demand and price trends the only factors behind our continuing viable textile
industry. Much of the domestic mills’ ability to stay afloat in today’s highly competitive global
markets stems from continuing productivity gains – as firms continue to modernize and take
advantage of new technological breakthroughs. A recently released government report covering the
16-year period from 1987 to 2003 finds average output per textile worker rose 3.9 percent
annually – with fiber/yarn/thread and fabric mills racking up even more impressive 5.2-percent
and 4.4-percent increases, respectively. Efficiency gains in the domestic apparel sector over this
same period aren’t all that bad either – averaging out near 3.1 percent a year.

Combine this with very modest wage gains, and there actually are some fractional declines in
both textile mill and apparel unit labor costs over this same 16-year time span. Productivity and
unit labor cost performance in these two areas has been as good as or even a bit better than those
noted in many other domestic manufacturing sectors.

Productivity gains show every sign of continuing. This can best be seen by looking at employment
and output trends over the last 12 months. Domestic mill production over this period declined by
only about 2.3 percent. On the other hand, employment in the combined basic textile mill and mill
product sectors was off about 4.5 percent. Implication: Output per worker over the past year has
again risen – probably somewhere in the order of 2 percent. This trend is expected to continue
into 2006 as domestic mills continue to invest in new, increasingly efficient equipment and
processes. This willingness to spend on new world-class equipment also is confirmed by the fact
that overall textile mill capacity – despite the spate of recent mill closures – hasn’t
really declined all that much when compared to the levels prevailing just one year ago.

There’s still no final answer on how the US-China dispute over textile and apparel imports will
be resolved, but a compromise – limiting future Chinese shipments – is virtually certain.
On the other hand, putting specific import numbers on any such agreement isn’t easy. Odds would
seem to favor a final pact along the lines of the recent deal with the European Union – one
that limits future Beijing-to-EU shipment gains to specified category-by-category percentages. Any
such agreement would clearly rule out any repeat of our huge import gains of recent months. Another
plus: A US-China deal would also assure our continuing exports of cotton, other textile raw
materials and textile/apparel manufacturing equipment to Chinese manufacturers.

Finally, an agreement would return some stability and predictability to an industry that has
been in a constant state of turmoil for nearly a year now.