T
rade continues to dominate industry news. The big headache has been the huge spurt in
textile and apparel imports from China over the last few months. Washington estimates that incoming
January shipments from that country jumped 39 percent vis-à-vis a month earlier. If some estimates
from China are to be believed, the figure was a lot higher.

Leading the gains were imports of thread (up nearly threefold); and women’s and girls’
lingerie, loungewear and nightwear (more than double the previous level). Imports of cotton knit
shirts and trousers also have taken off, and China now produces one-third of all the world’s
trousers. Europe is reporting similar big import gains. Some analysts feel this flood into the
United States and Europe could be a one-time surge — reflecting the fact that many Chinese mills
held back shipments at the end of last year to take advantage of 2005’s new quota-free ground
rules. But not many are ready to buy into that explanation. 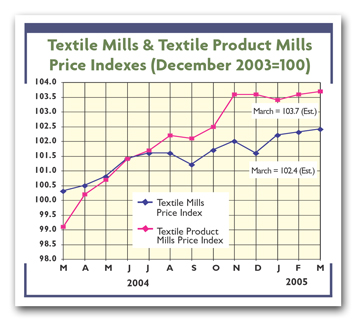 In any event, criticism of free trade in textiles and apparel is mounting. Domestically, the
Washington-based National Council of Textile Organizations is asking the US government to quickly
institute new moves to prevent another wave of plant closings and US job losses. Commerce
Department officials are discussing setting up an early warning system to better track import
surges from China. Counterparts in Europe are demanding the European Union and its 25 member
countries apply safeguard measures in several key textile and apparel import categories.

China also is beginning to realize something has to change. Hence, its recent announcement that
a government delegation will visit Washington and Brussels to persuade officials not to act too
precipitously. There also are reports of China pondering new ways to restrain outgoing shipments —
with the head of that country’s Chamber of Commerce for Imports and Exports of Textiles noting that
China will try to limit any excessive export growth. Moreover, while that nation is unlikely to
make any major upward revaluation in its currency, the feeling now is the yuan will be allowed to
slowly float higher as the year wears on.


Adding It All Up

All these new initiatives eventually will bear fruit, but just how much is anybody’s guess. The
best hope is for some modest deceleration in incoming shipment gains. In any case, China’s share of
the US market will continue to grow substantially from last year’s estimated 16-percent level.
Indeed, it could well double by next year. But

Textile World
doesn’t expect China to capture the huge 70-percent slice that some analysts have
predicted.

Putting all of today’s changing variables into the computer hopper, economic forecasting firm
Global Insight has made a substantial downward revision in its 2005 domestic outlook for the basic
textile mill, mill product and apparel segments of the industry. All three areas now are expected
to show meaningful declines in shipments, prices and profits, in sharp contrast to the basically
flat pattern predicted a few months ago. Basic mill dollar sales are now targeted to drop by more
than 11 percent — a major reversal from the previously forecast 1.5-percent decline. Some of this
slippage reflects price weakness, with average quotes expected to fall by nearly 6 percent.

In the textile product area, a previously projected 1.3-percent gain in sales now turns into
a 6+-percent drop. Some price attrition — about 1.7 percent — is expected here, too. Finally, in
apparel, a 9.4-percent falloff in dollar revenues and close to a 5-percent price decline replace
previously forecast flat trends. All of this, as might be expected, will take its toll on profits —
where declines for basic mills, mill products, and apparel are put at 9.3 percent, 10.1 percent and
11.4 percent, respectively.

On a somewhat less gloomy note, analysts at Global Insight expect some bottoming out in 2006.
Their projections see next year’s basic mill, mill product and apparel sales down by smaller
amounts — 6.5 percent, 3 percent and 5.6 percent, respectively.

Conveners Of The Textile Industry Jointly Support A Digital Platform To Enhance Scaleup Of...