T
he first month of a quota-free textile world has passed without any major domestic
erosion. According to the Institute for Supply Management, textile orders and production actually
were up a bit over the last reported month.

Some impact on textile/ apparel trade and domestic mill activity is inevitable over the
longer pull. But the way things seem to be shaping up, such changes should come slowly and
gradually — buying time for US producers and distributors to adjust and maybe even prosper in this
new global textile economy.

Wilbur L. Ross, chairman of the Greensboro, N.C.-based International Textile Group, of which
the Burlington House business is a part, would seem to concur, noting his US plants are still
profitable and he has no present plans to close any. Ross is taking advantage of the new trade
ground rules by announcing a joint venture in China to make and distribute sheets and other home
textiles. ITG’s partner, China Ting Group, will sell the goods in 25 Burlington House Retail stores
in China (See “ 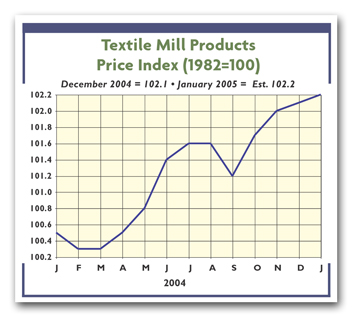 Cautious near-term optimism also is being expressed by other mill executives. Several feel that
any really significant trade impact stemming from the recent ending of quotas won’t be felt for a
year or more. Their reasoning makes sense, given such factors as normal order-production-delivery
lags, the need for detailed long-term planning before making major changes, and continuing
uncertainties as to how the United States and China will resolve still-existing disputes.

These factors must be considered before major shifts are made. The fact that most first-half
2005 orders already have been placed suggests few dramatic near-term demand changes. Since many
companies already are finalizing their third and fourth quarter plans, this pattern could persist
into summer and fall. Even going into 2006, few see shifts to just a single source like China; most
agree it would be foolhardy to put all of a firm’s eggs in one basket. On the other hand, citing
competitive pressures and the need to cut costs, companies do seem to anticipate a major reduction
in the sources that make up individual supply chains.


More On The Chinese Impact

Uncertainties involving US imports of Chinese textile and apparel — aside from the
all-your-eggs-in-one-basket caveat — would seem to call for some further comment. One thing is for
sure, Uncle Sam is making it absolutely clear that the small, corrective steps taken recently by
the Chinese are not nearly enough. Senior US officials have pointed out China’s recent imposition
of export duties on selective textile and apparel products averages only 1.3 percent — far too
small to have any meaningful impact.

Also increasing Washington’s concerns are the current huge Chinese trade surpluses and their
impact on the US dollar, and a disturbing new study prepared for the US-China Economic Security
Review Commission. The study finds more than 72,000 textile and apparel jobs were lost over the
1997-2003 period solely because of the US-China textile trade imbalance. Something is going to have
to give, making further changes in US-China trade ground rules pretty much inevitable.


A Look At Profits

Taking a look at mill earnings performances, profits and margins are still nowhere near levels
prevailing a few years back, but they’re still managing to stay in the plus column. The latest
official government tally covering the first nine months of 2004 suggests that last year’s
after-tax margin came to around 1.8 percent — pretty much unchanged from 2003 levels. These levels
are likely to persist into 2005; at least that’s the opinion of Global Insight. Analysts for the
economic forecasting firm, using gross operating profits as a measure of earnings, put the total
for combined basic textiles and textile products at $19.6 billion. That’s just fractionally under
the preliminary $20.8 billion level in 2004.

The same is true of apparel. Despite the ending of quotas, Global Insight sees 2005 gross
apparel earnings reaching to near $20 billion — not that much under the levels estimated for
2004.