Nylon is a material that plays a significant role in daily life, but its performance attributes and extensive applications are rarely recognized by the average consumer. This man-made polymer, first synthesized in 1937, is formed when specific chemical building blocks called monomers are brought together to create long chains known as polymers. Because of its versatility, nylon has traditionally been used to create products ranging from women’s stockings to Army parachutes and cording.

Nylon 6,6 is just one type of polymer used in textiles — other common textile polymers include nylon 6, polyester, rayon and polypropylene. Today, the uses for nylon 6,6 have grown to include all types of apparel, tires, automotive airbags and carpet, among other applications.

Houston-based Ascend Performance Materials is a privately owned, fully vertical nylon 6,6 producer, with roots going back more than 60 years. Ascend specializes in nylon 6,6 resins, fibers and compounds as well as specialty and intermediate chemicals used throughout the polymer value chain. In recent years, the company has expanded facilities including capacity increases across its intermediate chemicals and polymers portfolio. Today, Ascend has sales and technology offices throughout the world and six manufacturing facilities and a technology center in the United States. Globally, the company employs approximately 3,500 associates and contractors. In addition, Ascend has announced a $35.2 million investment in Greenwood County, S.C., that will create 30 new jobs.

Adding Performance Beyond The Basic

Amongst Ascend’s line of products is ENDUR by Ascend™, a fiber product differentiated by its unique antistatic technology. It is a filament- or staple-fiber product that can be blended with other fibers and yarns to provide fabrics with permanent antistatic functionality because it is neither a garment treatment nor a coating that can wear off over time. The yarn has a bicomponent structure featuring one-part nylon 6,6, and one-part conductive carbon. These two components are joined together during the high-temperature yarn extrusion process to produce a fiber that, among other attributes, eliminates static electricity.

In Endur, the conductive carbon component of the fiber grounds and harmlessly moves electricity through the garment, preventing a build-up of static electricity and removing the possibility of an electric shock.

“Endur is a speciality fiber product and the furthest down the value chain that Ascend sells,” said Harrie Schoots, Ascend’s Specialty Fibers Segment Manager. “It’s been exciting for me to take the product out to the brands, retailers and design folks and explain it to them and show them what it can do for their apparel products.”

Beyond reducing static within a garment, Endur imparts other desired attributes to a finished product (see box).

Futhermore, as a unique bicomponent fiber, Endur offers permanent value. As Schoots explained: “Because of the high temperature at which nylon 6,6 is melted and combined with the carbon, the fiber becomes very abrasion resistant and the carbon does not break off or flake away from the fiber, which is a very important property. In the past people have tried to weave or knit with a yarn that has been coated with carbon at a much lower temperature and the coating flaked off. If you have black specks of carbon on the machinery and then you run white fabric behind it, you can imagine what a problem that is.” 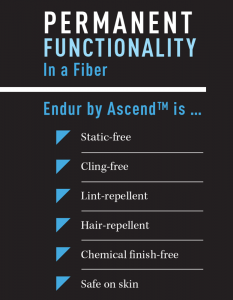 Proof In The Testing

To demonstrate that static does not build up in fabrics developed with Endur, Ascend employed the American Association of Textile Chemists and Colorists’ (AATCC) Test Method 115 — Electrostatic Clinging of Fabrics: Fabric-to-Metal Test.

“AATCC’s cling test is a test I think I pulled out of the basement from the polyester leisure suit days — it tests the static cling of fabrics,” Schoots said. “But we also had to show that the static is not in the fabric, and that’s why our lab offers the static decay test for customers.”

Ascend’s static decay test charges a fabric to 5,000 volts, then measures the time it takes for 90 percent of that charge to dissipate. “In many cases, fabrics will take more than a minute,” Schoots said. “But in order to show that a material offers static reduction, the time measured has to be less than half a second. Typically, fabrics featuring Endur take 0.01 seconds to reduce the charge. Essentially, if you wear a dress or yoga pants with Endur on a very dry winter day, you would not generate any static electricity when walking or sitting for example.”

Ascend, whose operations are based in the United States, has weathered the storm and resisted moving production to other countries. U.S.-based manufacturing has remained profitable for the company, and Ascend has never been more successful than it is today.

At the core of this success is Ascend’s open commitment to its employees. “The company values the communities and individual employees who are the lifeblood of Ascend,” Schoots said. “Our president and CEO, Phil McDivitt, is dedicated to a safe, healthy and sustainable workplace. Well beyond manufacturing a quality product, his goal is to have no incidents and zero accidents throughout the entire corporation, and he’s taken steps to ensure we all know that.”

The company also created the Ascend Cares Foundation in 2011 after employees of its Decatur, Alabama, facility were impacted by a tornado. According to the company: “The Ascend Cares Foundation is about making a difference in the lives of others. It is led by Ascend employees and supports Ascend families in their time of need, provides inspiring opportunities for community engagement and facilitates community leadership. Funded entirely by donations and company match, every dollar donated to the foundation supports the work of the foundation.”

Since its inception in 2011, Ascend reports the following tangible accomplishments made by the foundation:

Ascend accounts for approximately one quarter of global nylon 6,6 production. According to the company, its “… vision is to be [a] recognized leader in the nylon 6,6 value chain, creating new possibilities with nylon 6,6 for everyone, everywhere, every day.”