American textile workers are busy making things customers around the world want to buy, rewriting the popular narrative of the industry’s demise.

Mount Vernon Mills Vice President and Secretary Ned Cochrane has seen it all in his 30-plus years at the Mauldin, S.C.-based manufacturer. He said the industry’s resurgence is real and sustainable thanks to a confluence of factors and circumstances.

“Servicing the customer is the most important thing we do, and we do it better [domestically] than any country in the world,” Cochrane said. “Customers today want something special or unique; they want to be different from the next guy; they want consistent quality, and they know that in order to get that, they have to do business domestically.”

Higher labor rates, transportation costs and energy tabs in Asia, coupled with a substantial appreciation in the value of the yuan, have helped spur a blended marketplace strategy with a strong focus on American-made textiles. The industry generated $56.7 billion in shipments in 2015 — a five-year increase of 13.4 percent — decades after many thought U.S. textiles were dead. 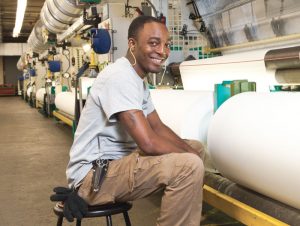 Made In America Is Back, And It’s Likely To Stay

Retailers from Wal-Mart to Abercrombie & Fitch are responding, creating sections for American-made items and sourcing goods domestically. In fact, Wal-Mart, which pioneered global sourcing to find the lowest-priced goods for customers, said it would increase spending with American suppliers by $50 billion over the next decade — and save money by doing so. Businesses in need of fast-turn, high-quality, low-risk goods have found a new sourcing spot, right where it used to be.

“We believe that U.S. consumers will increasingly position their support behind brands and companies that are investing in the USA,” said Peter Iliopoulos, senior vice president of Public & Corporate Affairs for Gildan, a leading supplier of quality branded family apparel. “We have invested $350 million in the U.S. in the past three years. Gildan has leveraged the great quality and superior value of USA cotton complimented with a strong base of skilled labor, low energy costs and a stable investment climate.”

Advantages of today’s U.S. textile industry include new manufacturing facilities filled with state-of-the-art equipment and a skilled workforce that can do substantially more with less. Between 2002 and 2012, U.S. textile mills increased productivity by 34 percent, tops among all industrial sectors in productivity increases. Gone are the days of dungarees and lunch pails. Today’s U.S. factories aren’t the clangorous, dusty places where lappers fed raw cotton into the sharp metal teeth of carding machines for eight hours a day. Low-wage, low-tech jobs are out, and comprehensive computer skills and specialized training are in — the new Made in America economic ecosystem relies on customization, cutting-edge technologies and workers who have mastered the machines.

“Our ownership has reinvested more than $100 million back into the company to modernize facilities and increase productivity,” said Cochrane. “We went out and got the best equipment money could buy, so we needed a more skilled workforce to handle it. As a result, our productivity is through the roof.”

“We have invested significantly in new equipment, technology and process improvements over the last 10 years,” said Iliopoulos. “Many of the innovative solutions now in our facilities were deployed through collaboration between our employees and our suppliers. We do not believe we could have achieved this level of success without that connection between our people and technology.” 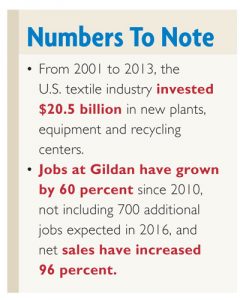 Increased demand and investments in technology have helped American textile companies achieve phenomenal growth, both in domestic job creation and the bottom line.

The increased demand for quality, domestically sourced textiles from state-of-the-art U.S. facilities has stemmed the tide of job losses that characterized the industry during the Great Recession. Today, the overall textile sector — from textile fibers to apparel — employs more than 500,000 workers.

The rise of the machines also has correlated to a rise in pay for skilled textile workers. In 2014, the average textile wage was $37,900 compared to $28,216 in 2002. In fact, textile workers earn 143 percent more than apparel store workers while also receiving health care and pension benefits.

“The introduction of more sophisticated technology within each process, with complicated circuitry and software driving almost all textile equipment, has elevated textile jobs,” Iliopoulos said. “We believe the shift toward sustainability in textiles has also created job opportunities, and the factors driving these changes will likely continue into the future.” 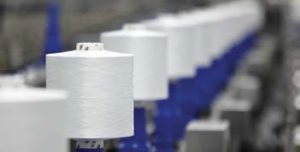 Innovating For The Future

“When things get tough, the easy thing to do is quit,” said ITG’s Burlington Group President Jeff Peck. “And once you quit, you’ve sealed your fate. So even when we were down, we never stopped development, and we never stopped innovating. Our customers today want products that do more and that have a story to tell, so they can create differentiation in the marketplace.”

Thinking differently has paid off for ITG. In 2007, just six years after filing for bankruptcy, ITG’s Burlington Group launched Burlington Labs, a state of the art “petri-dish” where ideas become reality.

“We have become a lightning rod for inventors and for emerging technology, because we can take raw ideas and commercialize them at lightning speed,” Peck said. “Customers see this and ask, can you do this? And because of Burlington Labs, we can say yes.”

Innovation in the industry has led to two new growth categories — nonwovens and technical textiles. Nonwovens are fiber-based products made of fabric that is compressed, heated or tangled, like felt. Envelopes, facial wipes, mops and medical scrubs are nonwovens. In the last decade, North Carolina has gained 1,945 jobs in the nonwoven products business.

Technical textiles are manufactured for non-aesthetic purposes, where function is the primary criterion. Products include protective clothing for firefighters, welders and astronauts; medical applications such as implants; and geotextiles that include reinforcements for embankments. Technical textiles have become one of the hottest growth categories for the industry, with a 34.9 percent increase in exports from 2007 to 2014.

“Innovation was our salvation,” Cochrane said. “When times were tough, we were forced to innovate to find new products that could help us sell, like technical textiles. Now innovation is part of our DNA. It’s who we are. After all, what you make is what makes you.”

The U.S. textile industry has grown by leaps and bounds, but Made in the USA makers are far from done. These companies are recognized as world-leaders in research and development and are developing new products everyday, from antiballistic body armor and conductive fibers to fabrics that adjust to climate change and smart textiles that use fabric to purify the water with nothing but sunlight.

“Today’s end-users don’t just wear textiles for comfort, they rely on them,” Peck said. “They need textiles for their safety, their health and their wellness. What we do now is more important than it’s ever been.”

Editor’s Note: This article appears in Textile World courtesy of the National Council of Textile Organizations (NCTO)  as part of the “American Textiles: We Make Amazing™”campaign. NCTO is a trade association representing U.S. textile manufacturing. Please visit ncto.org to learn more about NCTO, the industry and the campaign.