The U.S. textile industry was an industrial powerhouse that led the world in style, volume and quality during the middle of the 20th century. Unfortunately, by the early days of the 21st century, the industry has fallen to where it was a shadow of its former glory, ravaged by imports from government-subsidized Asian companies that paid very low wages.

One by one, spinners, weavers and knitters turned the lights off and shut the doors forever. Some experts and analysts predicted the industry had no future and would eventually all but disappear.

Despite all the naysaying, textile leaders were not ready to throw in the towel. Instead, they transitioned from mass production of commodity products to creating specialty, niche and high-tech products. They espoused a new value proposition that refocused the industry’s priorities. No longer would U.S. companies try to compete on volume and price. Instead, they promised to be world’s best in quality, service and speed to market. They realigned manufacturing capacity to more realistically align with demand. And they saw orders, revenue and profits skyrocket. The U.S. industry reclaimed its place among the world’s elite. All was well — at least until news broke of a highly contagious virus that was decimating China and beginning to spread around the world.

The industry hit bottom during the first half of 2020. Plants shut down. People sheltered in place. Stores and restaurants closed. Container ships full of products and supplies
were lined up at ports across the world with no way to unload their cargo.

Ever resolute, the industry persevered, and when the economy began to reopen, spinners and their sister companies once again began to recover. Orders improved — some companies even finished 2020 close to their original projections. Yet, even with a decent degree of recovery, things were not quite the same. Many companies had problems keeping qualified employees even before the pandemic began. After the initial quarantine period, many of those who were temporarily laid off decided not to return to work. A shortage of qualified labor, coupled with a global supply chain in disarray, meant customers were not getting their orders as quickly as before.

“Demand remains solid,” said one industry expert. “The problem is getting product to the customers. Between production problems and shipping problems, the time from order to delivery has increased substantially.”

And that negates two of the three U.S. industry’s foundational advantages. Quality is still there. Service and speed to market are not.

So, that leads to the question: what’s next?

A number of consulting companies and analysts have assessed the current state of manufacturing in America, including the textile industry, and have suggested several steps companies can take to solve the current labor problem, as well as prepare for a secure future.

Consulting company Deloitte, for example, has recommended manufacturers need to watch and act upon specific trends to secure their future. Three of those trends apply specifically to spinners and others in the textile industry. In dealing with the workforce shortage, Deloitte recommends finding ways to add flexibility and work/life balance to manufacturing jobs. Many displaced workers became used to a more balanced lifestyle and chose not to return to a more restrictive manufacturing environment.

Logistics challenges, including shortages of truck drivers, dock workers and others, are likely continue — maybe into the first half of 2023. As a result, spinners will likely incur higher costs, which are likely to be passed on through to customers. Companies should carefully plan and map out their supply networks. Deloitte says, “digital supply networks and data analytics can be powerful enablers for more flexible, multitiered responses to disruptions.”

The third applicable trend is sustainability. Deloitte reports: “The fast rise of environmental, social, and governance factors is redefining and elevating sustainability in manufacturing as never before.” This is something at which many spinners excel. Efforts by such companies as Unifi and Elevate Textiles have gained considerable global attention. More and more companies in the industry are undertaking concerted sustainability initiatives. 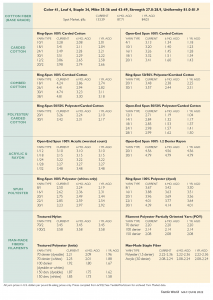