Manufacturing activity increased in November as the overall economy continued to grow for the 18th consecutive month, according to the Institute for Supply Management (ISM) Report on Business®.

The exports of textile and apparel from the United States increased by 20.15 percent in the first nine months of 2021, as compared to the same period a year ago, according to data from the U.S. Department of Commerce Office of Textiles and Apparel (OTEXA). Among textile mill products, yarn exports increased by 26.09 percent year-on-year to $2.902 billion, while fabric exports were up 15.79 percent to $6.451 billion and made-up and miscellaneous article exports grew 12.92 percent to $3.011 billion.

The value of exports stood at $16.75 billion during January-September 2021, compared to $13.941 billion in the same period last year, according OTEXA.

Mexico and Canada together accounted for nearly half of the total U.S. textile and clothing exports during the period under review. The United States supplied $4.726 billion worth of textiles and apparel to Mexico during the nine-month period, followed by $3.911 billion to Canada and $1.051 billion to Honduras.

Historically, textile and clothing exports have remained in the range of $22 billion to $25 billion per year. In 2019, for example, exports for the year totaled $22.905 billion. The effects of the global COVID-19 pandemic, however, caused the value of exports in 2020 to fall to $19.330 billion for the year.

Yarn Market first reported on the eventual need for sustainability and traceability programs  more than a decade ago. Back then, conversations about those issues were primarily concentrated in the agriculture and consumer products segments. But, even in the mid-2000s it was becoming clear that sustainability and traceability would eventually become priorities for any industry that manufactured components for products that would eventually be sold to consumers.

Today, the United States has become a world leader in sustainability.

In late November, Unifi Inc. announced a major milestone. The company has now transformed more than 30 billion post-consumer plastic bottles into its REPREVE® recycled performance fibers that are used by hundreds of the world’s leading brands.

“By making the switch to sustainable by choosing to use Repreve, we’ve been able to keep more than 30 billion plastic bottles out of landfills. We want to thank consumers for choosing to buy products — ranging from apparel to home furnishings to shoes — made with Repreve. Together, we are working today for the good of tomorrow.”

To put this achievement into perspective: 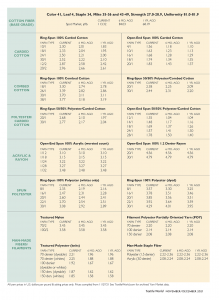