Many spinners have been running at full capacity, with a healthy backlog, since the beginning of the year. However, orders started slowing somewhat in the third quarter.

“We’ve seen a bit of a slowdown over what we’ve had for most of the year,” said one spinner. “Until just a few weeks ago, we were running at full capacity and did not have any immediate positions open. Business isn’t bad by any means, but it is a little slower than it has been. We’re still running the full schedule, but we are having to scramble a little bit to make it happen.”

Another spinner commented: “We are not dissatisfied with where things are at all. But we are receiving fewer orders over the past few weeks. But we do expect business to continue to be pretty solid for the remainder of the year, unless something unexpected happens.”

Trade Wars And The Strong Dollar

Spinners interviewed said the continuing escalation of the “trade war” with China has had little effect to date. “It hasn’t been going on long enough to really affect us,” said one diversified spinner. “The bottom line is that there is still so much illegal dumping going on that tariff impacts are hard to measure. If it continues to go on or get worse, then it might impact us, but to what degree we don’t know.”

Of more concern to some spinners — particularly those with a large export business — is the continued increase in the strength of the U.S. dollar versus other currencies. Global foreign exchange markets have pushed the dollar to its highest level on record, going back to 1973 when the United States ceased using the gold standard. The Chinese yuan, in particular, has lost significant value, moving from a yearly high in February of 6.6862 to the dollar to 7.15 on September 4. For U.S. consumers, a strong dollar reduces the cost of imported products. For textile organizations with a robust export business, their products become more expensive in other nations.

“Definitely, the strong dollar is more of a concern for us than increased tariffs,” said an industry expert. “It entices consumers to buy imported textiles. For those folks with less disposable income, price usually takes precedence over quality.”

News reports suggest President Donald Trump may send the United States-Mexico-Canada Agreement (USMCA) to Congress for ratification in early September. However, there is strong bipartisan opposition to some measures of the agreement, which suggests debate could be long and cantankerous. Passage of the agreement, sources agree, is far from guaranteed.

U.S. textile executives participated in a roundtable in late August with U.S. Representative Tom Rice, 7th Congressional District, S.C., to discuss, among other things, ways to jointly push for passage of USMCA, according to information from NCTO. Rice is a key member of the House Ways & Means Trade Subcommittee. The roundtable was hosted by Milliken & Company at its Spartanburg headquarters.

“USMCA makes several key updates to NAFTA that will enable our trilateral trade to become stronger, which benefits this key industry in South Carolina, Jeff Price, executive vice president of Milliken operations, said in an NCTO release. “We greatly appreciate the Congressman being here today and appreciate his leadership.”

Rice said: “Modernizing outdated trade agreements to reflect our 21st century economy will support American manufacturers and enhance our global competitiveness. I will bring the valuable input I received today back to Washington as I continue working to advance the USMCA and keep our economy booming.”

USCMA is the Trump-administration’s successor to NAFTA. NCTO President and CEO Kim Glas stressed the importance of the agreement to the textile industry. “U.S. textile exports to Mexico and Canada totaled $12 billion last year, underscoring the importance of our Western Hemisphere supply chain,” Glas said. “This key supply chain has helped drive the $20 billion in investment by the industry over the past decade and has also helped support investment and nearly 25,000 direct textile jobs in South Carolina alone.” 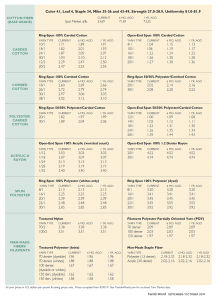