Many spinners were delighted with first half results. “We are running full out and have a healthy backlog,” said one spinner.

Another added: “Our business is doing very well. We have some limited capacity, but, overall, we’re pretty much full, with a nice pipeline of orders.”

“This has been the best start of the year we’ve had in some time,” noted one diversified spinner. “With the continued growth of the economy, at least for the short term, we expect the positive results will continue.”

Overall, spinners expect the favorable business conditions to continue through the rest of the year. Currently, however, the topic many spinners are watching closely is the progress of USMCA, the replacement for NAFTA.

USMCA — an agreement among the United States, Mexico and Canada — has been signed by the presidents and prime minister of each respective nation, but it still has a long way to go take effect.

The agreement was overwhelming ratified by Mexico’s Senate in late May. Also, in May, a bill was introduced in Canada’s House of Commons to authorize Prime Minister Justin Trudeau to put the agreement before the Canadian Parliament. However, according to law, if the agreement is not passed by the middle of September, it will die and will have to be reintroduced in the next parliament, which might be a different government.

But the most difficult road to passage lies with the United States, which, ironically, initiated the new agreement.

The U.S. Trade Representative submitted a draft statement of administrative action on May 27, which allows the Trump administration to send the agreement to Congress within 30 days. The bill must be passed by both chambers within 90 session days of introduction.

The concern is whether House Speaker Nancy Pelosi will allow the agreement to follow the typical timeline. The Trump administration’s desire to move forward more quickly than Democrats prefer has caused significant tension.

It is well known that a number of democrats object to portions of the agreement. USMCA is considered a revenue bill, which requires the House to pass it first. The House has a maximum of 15 session days to vote on the bill once it is on the floor. If the bill is not passed in that time, it is no longer safe from amendment and filibuster.

Congress must ratify USMCA this year or with an impending election, wait until after 2020. That would move implementation into early 2021.

On June 26, 2019, preliminary determinations from the DoC determined that imports of polyester textured yarn from China and India are being unfairly sold below their fair value in the United States at significant double-digit margins.

Importers have been subject to significant double- and triple-digit duties on these imports since May 2, when the DoC published its preliminary determinations that the governments in each country are unfairly subsidizing imports of this merchandise. U.S. Customs and Border Protection will now also begin collecting antidumping duties in the amount equal to the adjusted dumping cash deposits rates for imports from each country.

Spot quotations averaged 60 points higher than the previous week, according to the USDA’s Agricultural Marketing Service’s Cotton and Tobacco Program. Quotations for the base quality of cotton (color 41, leaf 4, staple 34, mike 35-36 and 43-49, strength 27.0-28.9, and uniformity 81.0-81.9) in the seven designated markets averaged 60.50 cents per pound for the week ending Thursday, July 4, 2019. The weekly average was up from 59.90 the previous week, but down from 80.42 cents reported the corresponding period a year ago. 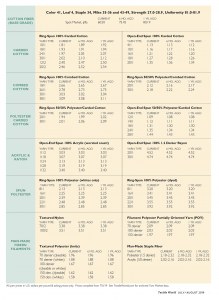