Many spinners reported excellent results for the first quarter of the year. “We have some limited capacity in some areas, but, overall, things have been very good,” said one spinner. “We have a healthy backlog, so we don’t anticipate slowing any time soon.”

Other spinners also said they had a solid first quarter. “This has been the best start of the year we’ve had in some time,” noted one diversified spinner. “With the continued growth of the economy, at least for the short term, we expect the positive results will continue.”

USMCA Deal Still Has A Long Way To Go

Advocates of the United States-Mexico-Canada Agreement (USMCA) are hoping that Congress will take action on the trade deal in the next three months. “I think the timeline for the vote is that the bill is going to come to the Congress pretty soon,” Senator Roy Blunt, R-Mo., said in a recent interview. Once there, however, USMCA is likely to face lively debate.

“Passing trade legislation is often difficult, but the U.S.-Mexico-Canada Agreement, as the updated NAFTA is now known, faces an especially uncertain path,” according to a recent report by Minnesota Public Radio’s Marketplace.

“The dynamic has typically been, presidents [from either party] negotiate agreements, Republicans overwhelmingly support it, and enough Democrats get dragged along to make it possible,” said Senator Pat Toomey, R-Pa., in an interview. Toomey is a member of the Senate Finance Committee, which has jurisdiction over trade agreements. “Now we’re in a dynamic where it’s very different. We have a president who’s much less pro-trade than the Republican consensus has been historically, and Democrats do not appear as enthusiastic about working with this president as they might have been with others.”

While the current U.S. administration has touted USMCA as landmark agreement that will have a tremendous impact on U.S. exports and imports, impartial observers are uncertain whether it will generate significant results. Recently, the International Trade Commission issued its view of the cumulative impact of the agreement. The commission’s conclusion is that the overall positive impact to the U.S. economy will be in the neighborhood of 0.35 percent.

Sustainability will be the featured topic at the Techtextil and Texprocess trade fairs, which will be explicitly turning their focus for the first time onto their exhibitors’ approaches to sustainability. From fibers, to garments, to technical textiles, companies are working to conserve water and using little or no solvents in their manufacturing processes, according to news sources.

Indeed, sustainability has been hot topic across the industry. One of the pioneers in sustainable manufacturing, American & Efird, recently released its ninth annual Corporate Sustainability Report. Just a few highlights, according to the report, are: Recycled and reused more than 2 billion liters of wastewater at global operations since 2013; 41-percent reduction in global water consumption (liters per kg of thread) since 2006; 100 percent Zero-Waste-to-Landfill status at 16 global manufacturing operations and support facilities in 2018, with five other operations recycling more than 90 percent; and 45 percent of A&E’s global energy portfolio for steam production consisted of renewable fuels in 2018. 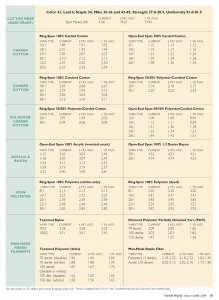