Business remained strong across the board for many spinners heading into the final week of August. Ring-spun yarn, as has been the case for the past few years, is in very high demand.

The industry has undergone a radical and welcome change over the past few years. Except for a few down months in 2017, business has been steady in the industry for quite some time — a tremendous relief from the roller coaster rides from the 1980s to the early 2000s when hundreds of plants were closing their doors, leaving thousands of people unemployed.

Those were the years when a number of experts around the world were predicting the complete collapse of the U.S. textile/ fiber/apparel complex.

But, thankfully, not all predictions come true. Over time, the industry’s production capacity began to align with customer demand, ushering in a new age of stability. And then, against all odds, and contrary to all of those doomsday projections, the U.S. textile industry began once again to grow. As it became more technologically advanced, more productive and efficient, the U.S. industry began once again to acquire the ability to go toe-to-toe against the competition — regardless of where that competition might be. In fact, companies from other nations began investing in U.S. yarn and fiber operations.

Among those companies is Lenzing, an Austrian company that supplies the global textile and nonwovens industry with high-quality, botanic cellulose fibers. Lenzing has one plant in Alabama and is building a new facility in the Mobile area. The facility will bring 163 new jobs to the area and will significantly increase production of one of the company’s flagship products, TENCEL™ fiber, when it comes on line in 2019.

And just recently, Lenzing announced that Tencel Luxe branded lyocell filament yarns will be included in designer Mara Hoffman’s 2018 ready-to-wear collection as well as in designs for Fall 2018. Hoffman has been consciously and progressively increasing the sustainability profile of her apparel designs for the past several years, especially with her selections of more sustainable fibers and fabrics, according to Lenzing.

Incorporating more recycled raw materials is another way Hoffman reduces her carbon footprint and the impact her products have on the environment, Lenzing notes in a release. She also will feature fabrics made with Tencel Lyocell with Refibra™ technology in the Fall 2018 collection. Tencel x Refibra is the only commercially available fiber made from a combination of cotton scraps and renewable wood, and produced using the environmentally friendly closed-loop production process, Lenzing reports.

“Clothing places an intense burden on the environment,” Hoffman said. “Through intentional fabric selection and design choices, we create collections that look and feel good and that have a significantly lower impact on our planet. Our customers are starting to understand our sustainability efforts, to learn about them, and to look for them in other brands too.”

At the time of this writing, NAFTA negotiations were coming down to the wire. During the last week in August, the United States and Mexico hammered out a tentative agreement, with Canada on the sidelines. From the The Hill website: “For the past month, Canadian officials stood back, stating repeatedly that they would return to Washington only after the U.S. and Mexico had wrapped up purely bilateral issues. But it turned out that the U.S. and Mexico actually negotiated a completely updated NAFTA and presented this tentative pact to Canada as a virtual fait accompli.” The Canadian trade representative then rushed to Washington to provide Canada’s input on the treaty talks the United States and Mexico had agreed to conclude by August 31. At the end of August, specific details of the agreement were not available. 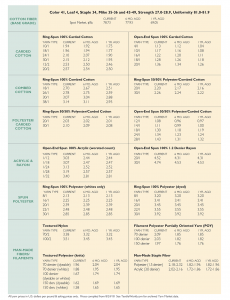