Spinners and industry insiders say they are optimistic that the continuing surge in orders over the past few months will continue into the third quarter of the year.

“I am comfortable, at least at the moment, about where we are and how the next few months look,” said one multi-national spinner. “We are getting good week-to-week results, and we’ve finally been able to establish a pipeline. It’s not as long as we would like, but it is better than what we had. I think we are all beginning to accept that shorter orders are going to become more and more common.”

Another spinner commented: “It is still hard for customers to get positions in ring spinning. Over the years, as we reduced capacity to be better aligned with demand, we, perhaps, reduced our ring-spinning capacity a bit too much, especially when several of the big players closed in the early part of the decade.”

There is at least some relief in sight for ring spinning capacity. Keer America Corp. began ring spinning on two frames in late June. By year’s end, the company is expected to be operating 75,000 spindles on new Rieter and Saurer Zinser ring-spinning frames.

“Keer America is unbelievably proud to be part of this revival,” a Keer spokesman said in an interview. “We want nothing more than to take full advantage of American-grown cotton and partner with the American workforce in order to produce the highest quality of spinning yarn.”

Keer’s second South Carolina plant is expected to have an annual yarn capacity of 40 million pounds, with a count range from Ne 6 to Ne 40 for both carded and combed yarns.

Other than ring-spun combed and carded cotton yarns, spinners report that specialty yarns are still moving well. “They’ve been solid all year, and continue to account for a lot of volume,” said one spinner.

Overall, spinners have reported an increased interest in cotton yarns across the board this year.  But that doesn’t mean blends have suffered. “There are still a lot of customers who moved to blends when cotton prices went crazy a few years ago, and a lot of them decided they were happy and stuck with the blends,” said one spinner.

Despite the resurgence in the U.S. industry over the past few years, industry experts and observers say that there is still plenty of room for improvement.  “It’s all about research and development,” said one industry observer. “Opportunities abound for those companies willing to invest in developing new applications for yarns, new yarn properties or new solutions for old problems.”

One spinner said: “The ability to innovate is key to future growth, especially for technical and specialty applications.” Added another executive: “We have been working to further develop better fire-retardant products, for example. And there are new opportunities in high-performance sportswear, medical applications and other areas. As economies and industries mature — especially in Asian countries where low-cost production is now an asset — the entire dynamics of the industry are likely to change. The selling point will change from “what does it cost?” to “what can it do?”

In the continuing escalation of back-and-forth tariff increases between the United States and China, the National Council of Textile Organizations (NCTO) is asking that products from the fiber/textile/apparel complex be included. “NCTO is convinced that the Trump administration’s Section 301 tariffs would be far more effective if Chinese apparel and sewn non-apparel end products were included in the 301 list because that would benefit the entire U.S. textile and apparel supply chain,” said NCTO President Auggie Tantillo, noting that these products were not included on the U.S. government’s latest proposed tariff list. 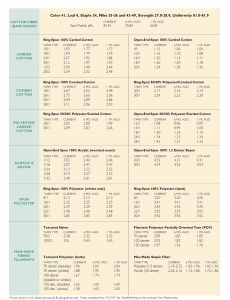