Overall, many spinners were satisfied with the state of their businesses in 2017. The year started slowly, but business picked up considerably at the end of the first quarter and stayed relatively steady for the remainder of the year.

A number of companies enter 2018 with considerable optimism.  “We feel good about where we are, and, if economic conditions continue to improve, we expect 2018 to be even better,” said one spinner. “We’ve had a steady stream of business since March of last year. It has gotten a little better with each month.” Added another spinner: “We were solid last year. We see no reason that 2018 will not be similar or better. Consumers are beginning to let go of some of their discretionary income, and that is always good for us.”

Indeed, consumer confidence in November was at a 17-year high, according to the Consumer Confidence Index published by The Confidence Board. And December’s index was almost as good. Consumer confidence reached 128.6 in November and fell only slightly to 122.1 in December. “Despite the decline in confidence, consumers’ expectations remain at historically strong levels, suggesting economic growth will continue well into 2018,” Lynn Franco, director of economic indicators at the Conference Board, said in a release. Confidence has been fueled by a few factors: the job market, the soaring stock market and promised tax cuts.

“Business continues to be good,” said a yarn broker, “and I am anticipating that 2018 will be fine as well. But, it all depends on what you are trying to sell. Few U.S. spinners can compete in commodities. Those that do have tremendous production capacities. But a lot of smaller companies are doing exceptionally well by focusing on particular niches in the marketplace, such as yarns for specialty applications, medical textiles, technical textiles, yarns for industrial fabrics and similar things.”

“What we need,” said one industry insider, “is more ring-spinning capacity. Over the past few years, we have had numerous instances where getting a position in ring-spun yarns was very difficult.

An increase in capacity is coming. Keer America, which already has an open-end (OE) plant near Fort Mill, S.C., plans to start production in its new-ring spinning plant in May. According to the company, the plant — Phase II of Keer America’s plans — will have a production line of 70,000 spindles of ring-spun yarn, cover KPRS and CPRS, slub, core spun yarn, count range from Ne6 to Ne40, carded and combed. Annual production capacity will be around 40 million pounds.

The Phase I plant, which began operation in February of 2015, currently produces 1.1 million pounds of yarn per week of OE yarn. Phases III and IV, according to Keer, will be designed to produce cotton/synthetic blend spun yarns. The company anticipates groundbreaking in 2019.

Little progress was made in the latest rounds of NAFTA renegotiations, with the United States and Canada still at loggerheads over several issues.  Negotiations were set to resume later in January in Montreal. As of this writing, the Canadian government is steeling itself for a possible U.S. exit.  If that occurs, the two countries would have to negotiate a bilateral trade agreement. The United States already has a bilateral agreement with Mexico.

Daily average quotations ranged from a low of 75.61 cents Friday, January 5, to a seasonal high of 79.96 cents Thursday, January 11. Spot transactions totaled 148,565 bales. This compares to 75,044 bales reported the previous week and 89,020 spot transactions reported for the corresponding week a year ago. Total spot transactions for the season were 1,067,016 bales, compared to 873,030 bales for the corresponding period a year ago. The ICE March settlement prices ended the week at 82.65 cents, compared to 79.25 cents the previous week. 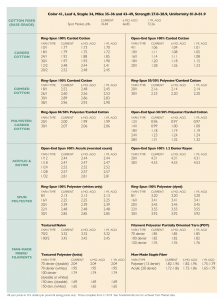