The old saying goes, “If you don’t like the weather in (insert city/state name here), just wait a few minutes and it will change.” Some spinners would claim that same saying applies to yarn orders in 2017.

As is customary, Yarn Market offers a review of the year in spinning for the last printed issue of the year. And for 2017, the word for many was “change.” As one spinner said in September: “This is just a funny business. You never really know what to expect. Overall, our orders have been fine. We don’t have a huge backlog, but that has been the case for most of the year. But just when we expect business to fall off some, it picks up. And just the opposite happens. We see the signs that say to expect big things and then nothing happens.”

Another spinner said: “Late last year, and into the second quarter of this year, business was really spotty. It would be good one week and terrible the next. Now it is just steady, and we hope it remains that way. We are certainly optimistic about prospects for the rest of this year and into the first quarter of next year.”

For many, the year started off slower than they had hoped. As one spinner noted in January: “Our order pipeline is not very long right now. We have numerous inquiries from customers, but not a lot of sales activity.”

In fact, for most of the first quarter business was slower than what has been the norm over the past few years. However, for some, orders began picking up in March and remained steady for the rest of the year. “I wouldn’t say business is great right now,” a spinner told Yarn Market in March, “but it is certainly better than it was. We’ve been getting a steady stream of orders for the past five or six weeks and inquiries are on the rise.” Another commented: “It looks like we are beginning to return to normal. We’ve had a noticeable increase in interest. The sizes of the orders are getting a little bigger. We are beginning to build a little bit of a backlog again.”

Several spinners noted changes in product mix as the year progressed. For the first half of 2017, blended yarns were garnering a lot of interest. As one spinner said, “A lot of customers moved to blends a few years ago, when the price of cotton skyrocketed. But even after cotton prices came back down to normal ranges, a number of customers have stuck with the blends. End customers like blends because of how easy they are to care for.”

However, as the year progressed, some companies noted an increased demand for cotton. “Over the course of the summer, we had a lot of orders for blends,” one spinner said in September. “In fact, that has been the bulk of our business for a few months. But now, heading into the end of the year, we are seeing a lot more orders for cotton yarns.”

When asked how they would characterize 2017 as a whole, several spinners said it was just a typical year. “In this business, there are always going to be ups and downs,” said one industry insider. “There are so many things that affect our business that are not in our control. For example, what happens in Washington can cause consumer confidence to either soar or drop. And that affects retail sales, which, in turn, affects our customers.”

Said a southeastern yarn broker: “The business has its ups and downs, but they are not as severe as they used to be. As I have said before, what has gradually happened is that the number of spindles in the United States has decreased to the point where supply and demand are relatively equivalent. We had many years of decline, and now we are starting to see some growth, with new capacity coming online. The key is to take a smart approach to growth and make sure that we do not overgrow our market.” 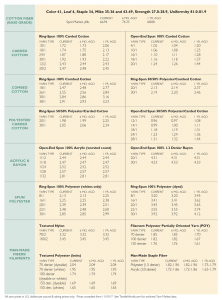