Business remained brisk for many spinners through the middle of October. “We are running a full schedule,” said one spinner, “and have enough in the pipeline to keep us busy for a while.”

Ring-spun yarns, in particular, continue to be in high demand, as has been the case for the past several years. “Right now, looking at both Central America and the United States, I would have to say we are at or close to capacity for ring spinning,” said a multinational yarn broker. “Overall, business is good, and has been for several months.”

Another spinner said that a lot of orders coming in to his company are for yarns that are low-end. “Volume is not our problem,” he said.  “We have plenty of volume. The product mix is what we would like to see change.”

A specialty spinner said he is happy with the amount of business generated, but would like to see bigger programs.  “We are running flat out, but most are short orders. We continue to spend a lot of time changing out.”

Compared to the same period a year ago, spinners say they are happy with where business stands. “It seems that, as the year has worn on, things have gotten better month by month,” said one spinner. “Late last year, and into the second quarter of this year, business was really spotty. It would be good one week and terrible the next. Now it is just steady, as we hope it remains that way.  We are certainly optimistic about prospects for the rest of this year and into the first quarter of next year.”

NAFTA — Will The United States Walk Away?

What happens next in the ongoing NAFTA negotiations is of significant interest to spinners, the textile/apparel complex as a whole, and U.S. manufacturers in general. President Donald Trump has taken an aggressive stance in renegotiation and has threatened to withdraw from the agreement should Canada and Mexico not be amenable to his administration’s demands. A primary objective for the United States is to reduce the trade deficit with both Canada and Mexico.

“Overall, the United States does run a trade deficit with both countries,” said one industry insider. “But, in textiles and apparel, we recorded a trade surplus of more than $3 billion last year. It would not be in the industry’s best interests for the U.S. to walk away from NAFTA.” Overall, U.S. manufacturers shipped more than $11 billion in products to Mexico and Canada in 2016, according to a release from NCTO.

However, NCTO CEO Auggie Tantillo said during testimony at a U.S. Trade Representative’s hearing earlier this year that some provisions of the agreement should be renegotiated.  “We strongly support President Trump’s intention to reopen NAFTA and agree that it can be updated and improved to significantly enhance U.S. textile production, exports, and employment,” he said. “The NAFTA region enjoys vibrant fiber, yarn, and fabric sectors in addition to cut and sew capabilities. As a result, NCTO supports building on the successes of NAFTA through seeking reasonable improvements to the agreement, but not a cancellation thereof, due to the high level of supply chain integration that exists today.”

Of particular interest to the NCTO is closing the loopholes in textile rules of origin. “The most egregious example is tariff preference levels,” Tantillo said. “Tariff preference levels (TPLs) allow for products to be shipped duty free despite their components, representing the bulk of the value, being sourced from outside countries. For example, a cotton top, made from Chinese yarn and fabric, can be cut and sewn in Mexico and shipped duty free to the United States. Consequently, TPLs undermine benefits for NAFTA textile manufacturers, transferring them to non-signatories, such as China, who often use predatory trading practices and have made no market-opening concessions themselves.” He said NCTO strongly recommends that the NAFTA TPL be eliminated.

The fourth round of negotiations is set to conclude shortly, with a fifth round scheduled for early November. The question on the minds of a number of observers is whether the president would actually withdraw from the agreement. One spinner asked: “Would he really do this, or is he just grandstanding to try to intimidate Canada and Mexico to go along with his proposals?”

However, Trump has frequently threatened to scrap NAFTA, just as he withdrew the United States from the Trans-Pacific Partnership Agreement.  “Interestingly,” said one observer, “many of the provisions Trump wants included in NAFTA were part of TPA, which he said was a terrible agreement. At this point in time, it is hard to say what the future of NAFTA will be.”

Yarn Market will continue to follow the negotiations as they progress. 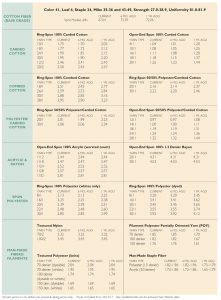