A number of spinners reported stable business conditions throughout the third quarter and expect orders to continue to be relatively strong until the typical end-of-the-year slowdown.

“Our business has been solid,” said one spinner. “You couldn’t say it’s been great, but it’s been relatively steady throughout the third quarter.” Added another spinner: “This is just a funny business. You never really know what to expect. Overall, our orders have been fine. We don’t have a huge backlog, but that has been the case for most of the year. But just when we expect business to fall off some, it picks up. And just the opposite happens. We see the signs that say expect big things and then nothing happens. As I said, it is just a funny business.”

Some spinners noted that orders for cotton yarns picked up significantly in early September. “Over the course of the summer, we had a lot of orders for blends,” said one spinner. “In fact, that has been the bulk of our business for a few months. But now, heading into the end of the year, we are seeing a lot more orders for cotton yarns.” Another spinner commented: “We’ve seen definite increase in orders for cotton yarns in the last few weeks. We’ve got a steady stream of orders coming in that we hope will keep us busy until everyone starts shutting down and cleaning up for the holidays.”

A multi-national spinner said: “Orders across the board have been strong. We are moving a lot of specialty yarns and a lot of cotton. In fact, at the moment, it seems the only things that aren’t moving very well are OE yarns and some commodity products. And that’s because the market is already flooded with inventory of these products.”

Weather dominated much of the discussion among yarn spinners in late August and early September. Hurricane Harvey ripped through the Texas coast, accounting for numerous personal tragedies and record amounts of property destruction. Yarn spinners were affected as well, as spot market cotton prices temporarily spiked to a season high of more than 70 cents per pound on August 31.

As of this writing, Hurricane Irma is poised to hit the Florida coast. Its track is uncertain and could affect a significant portion of the southeast and south central United States. Irma has a number of spinners concerned about its impact on the U.S. cotton crop. Note: By the time of publication, a lot will be known about how Irma affected the U.S. industry. A review of Irma’s impact on the U.S. yarn business will be published in the next “Yarn Market.”

“It is not likely to destroy a lot of the cotton crop in the southeast,” said one spinner, “but it could have a significant impact on the overall quality of the crop.” Said another spinner in early September: “With a storm so powerful, it is just going to be wait and see. We still don’t even know where it is going — how much of the country it is going to affect. The bad news is that it is very strong. The good news is that it is moving rapidly, so it is unlikely that we will see the devastating flooding associated with Harvey.”

The USDA also reported that demand was good for color 41, leaf 4, and staple 34 and longer for second and third quarter 2018 delivery. Some mills anticipated increased cotton consumption during the fourth quarter of 2017 as yarn demand improved. Most mills were operating on five-to-seven day schedules. 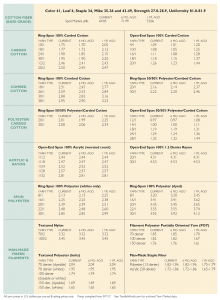