Spinners report orders continued to improve in May, with some yarns in particularly high demand.

“We are seeing demand for ring-spun and air-jet yarns pick up significantly,” said one spinner. “Inquiries and orders have been on the rise since March, and we are optimistic that the slump we experienced is over.”

Another spinner reported high interest in some specialty yarns. “Business has been increasing across the board,” said one specialty spinner. “If there is one area we continue to be disappointed in, it would be in yarns for home furnishings, which have not come back as strong as we expected.”

A yarn broker noted interest in blends continues to be high among some of his customers. “These folks went to blends a few years ago when the price of cotton got so high. They liked what we gave them and have had, to this point, no desire to go back.”

Despite the uptick in business, orders for some spinners remain smaller than they would like. “It has been this way for some time,” said one spinner. “Orders are smaller than they used to be. Volatility of pricing and demand, and fear of a sudden economic downturn, makes customers afraid to order any more than they absolutely have to have.”

“Business is stronger at this point than we expected,” said another spinner. “But most of the orders we have are in relatively small volumes. We keep hearing that a lot of program business that left in anticipation of a completed TPP (Trans-Pacific Partnership) is coming back to this hemisphere now that TPP is off the table. But we have yet to see it to any significant degree.”

For the most part, spinners are satisfied with where they are at this point in the year. “We got off to a slow start this year, but business is now in line with our expectations. It’s not the best it’s ever been, but it is better than it was. Last year was disappointing, and so was the beginning of this year. But things seem to be getting back to normal.”

One reason for optimism is the continued high consumer confidence in the future of the U.S. economy. The Consumer Confidence Index, published by the Confidence Board, reached its highest level in March since December 2000. Despite a slight decline in April, the Board reports that consumer confidence remains high.

“Consumer confidence declined in April after increasing sharply over the past two months, but still remains at strong levels,” said Lynn Franco, Director of Economic Indicators at The Conference Board. “Consumers assessed current business conditions and, to a lesser extent, the labor market less favorably than in March. Looking ahead, consumers were somewhat less optimistic about the short-term outlook for business conditions, employment and income prospects. Despite April’s decline, consumers remain confident that the economy will continue to expand in the months ahead.”

Average quotations for the base quality of cotton (color 41, leaf 4, staple 34, mike 35-36 and 43-49, strength 27.0-28.9, uniformity 81.0-81.9) in the seven designated markets measured by the USDA averaged 74.33 cents per pound for the week ending May 11, 2017. The weekly average was down from 75.69 the previous week, but up from 59.26 cents reported for the corresponding period a year ago. Spot transactions reported in the Daily Spot Cotton Quotations for the week ended May 11 totaled 3,507 bales. This compares to 838 bales reported the previous week and 7,555 spot transactions reported for the corresponding week a year ago. Total spot transactions for the season were 1,556,676 bales compared to 1,432,122 bales for the corresponding week a year ago. The ICE July settlement prices ended the week at 79.18 cents, compared to 78.91 cents the previous week. 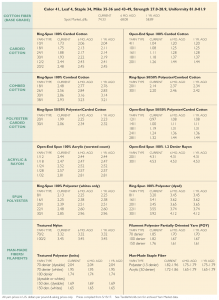