The stance of yarn spinners and fabric knitters and weavers has changed on trade issues over the past several decades. “Our industry was dismantled piece-by-piece for many years by unfavorable trade agreements that created a flood of cheap imports that we just couldn’t compete with,” said one spinner. However, he said, the industry responded by increasing production efficiency, focusing on customer service and fast delivery, and developing aggressive export strategies of its own. “Our primary domestic customers at the time were cut-and-sew shops, and they were closing at a rapid rate — to the point where, today, they have all but disappeared. We had to reinvent ourselves or close up shop.”

Today, however, it is not the trade agreements themselves that draw the most ire from U.S. textile leaders, but rather their enforcement. “As our reach has become more global, the view many of us have about trade has changed,” said one spinner. “We have the capability to compete favorably with just about anyone, as long as everyone plays by the rules. The problem is that, in many instances, we are the only ones playing fair.” He cited, as an example, a report from the National Council of Textile Organizations (NCTO) that indicated up to a third of denim jeans that claim NAFTA origin actually may be made using Chinese fabric.

In response, Congress in early 2016 passed “The Trade Facilitation and Trade Enforcement Act of 2015,” which increases enforcement activities across multiple fronts. “This is a big step in the right direction,” said one spinner. “Now let’s see how aggressively it is applied.”

A cornerstone of U.S. President Donald Trump’s “America First” agenda is the review and possible reconstruction of how the United States trades with other nations. Trump has made no secret of his preference for bilateral agreements over those such as the North America Free Trade Agreement (NAFTA), which he has promised to renegotiate to provide a more competitive advantage for U.S. companies.

He has threatened, for example, to impose heavy tariffs on Mexican products. And Mexico has promised to retaliate, placing higher tariffs on U.S. goods or replacing them with products from other countries.

NAFTA isn’t the only target of the administration. China has been called out as well, and Chinese officials, like those in Mexico, have promised retribution if action is taken.

“It is possible, if we don’t tread lightly, that we are looking at a potential trade war,” said a general business analyst. “If that happens, virtually everyone loses, especially the U.S. consumer, who will end up paying higher prices for both imported products and those produced at home. We certainly want agreements that enhance the competitive position of U.S. companies, but those agreements must be fair across the board.”

Trade disparity is, however, no longer the primary impediment to the prosperity of the U.S. industry, according to many industry experts. From an NCTO report: “Countries that trade with the U.S. and manipulate currency cause trade deficits that interrupt trade flows by inflating the cost of U.S. exports, deflating the cost of U.S. imports and in turn displace U.S. jobs.”

“Currency manipulation has a significant detrimental effect,” said one industry expert.” Indeed, according to data from the Economic Policy Institute, an estimated 2.4 million U.S. jobs were lost between 2001 and 2008 because of currency manipulation by China. From the NCTO report: “While the Chinese government is the most widely known government to manipulate its currency, many countries wishing to engage in international trade with the U.S. maintain artificially low currencies.” The report noted that Japan, Vietnam, Singapore and Malaysia also are known currency manipulators.

“When you look at how strong the dollar has been over the past few years, and then take into consideration that the currencies of some countries are artificially deflated, it makes U.S. goods incredibly expensive in comparison,” said one yarn seller. “A significant portion of our production is now exported, so it has a profound effect. But it has an effect at home, too, because imported goods, in relation, are cheaper than ever.”

Whether the issue is trade or currency manipulation, U.S. producers seem to always be fighting an uphill battle. Said one spinner: “We are looking for that one thing we never seem to have — a level playing field.” 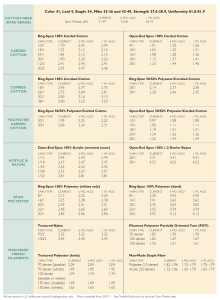 Klopman Receives A Visit From Europe’s Largest Industrial Laundries, And Continues To Invest In...