The yarn business in the United States has been in a state of uncertainty for the past 15 months. At the close of the first month of 2017, some spinners say they are no closer than before to understanding why demand has taken a noticeable dip.

“Overall, in 2016, I would say our business was down at least 20 percent from the previous year,” said one representative of a multinational spinner. “We did not see things pick up a whole lot in the first three weeks of January, but it’s not unusual for January to be slow even during very good years. We are hoping that, as the year progresses, the market will return to normal — with normal being similar to 2013 through 2015.”

Another spinner agreed: “Our business has been off a bit since about December of 2015.  Last year was, at best, mediocre, and 2017 is continuing in the same vein. We have attributed the decrease to a number of things — excess inventory by customers, politics, consumer confidence — but it doesn’t seem any of these reasons are real. As I have said before, when I look at overall business conditions, it doesn’t seem that anything is fundamentally different. It is perplexing.”

Indeed, consumer confidence was high throughout 2016, reaching a 13-year high in consumer expectations in December. “Consumer Confidence improved further in December, due solely to increasing expectations, which hit a 13-year high,” said Lynn Franco, Director of Economic Indicators at The Conference Board, the publisher of the Consumer Confidence Index. “The post-election surge in optimism for the economy, jobs and income prospects, as well as for stock prices, which reached a 13-year high, was most pronounced among older consumers. Consumers’ assessment of current conditions, which declined, still suggests that economic growth continued through the final months of 2016. Looking ahead to 2017, consumers’ continued optimism will depend on whether or not their expectations are realized.”

“With consumer confidence high, discretionary spending usually increases, and this has been evident in other areas within the manufacturing community, such as automobiles,” said one textile industry observer. “But if there has been a surge in apparel and home furnishings sales, it hasn’t yet trickled down to the manufacturers.”

Evidence of this is clear from the statements of several manufacturers of apparel yarns. “Our order pipeline is not very long right now. We have numerous inquiries from customers, but not a lot of sales activity. We had a spike earlier early in the fourth quarter of last year that gave us some hope that we would start 2017 stronger than we expected, but that didn’t last very long. January was slow, but we have noticed the increase in inquiries, and we hope this will translate into more business over the next couple of months.”

It comes as no surprise that specialty yarns are faring much better than commodities. Said a prominent yarn broker: “Commodity business is not good anywhere. Specialty yarns are still moving, as are those for industrial and technical applications. I have actually had a good start for the year, but not in any commodities. I don’t think hardly anyone is selling a lot of commodity yarn right now.”

Blended yarns are also becoming increasingly popular. “A lot of customers moved to blends a few years ago, when the price of cotton skyrocketed,” said one spinner. “But even after cotton prices came back down to normal ranges, a number of customers have stuck with the blends. End customers like blends because of how easy they are to care for.”

Cotton yarn spinners are facing not only flat business conditions, but are also having to deal with increases in raw material prices. Cotton, which dipped to less than $0.60 per pound in 2016, has been over $0.70 for several months and is still inching up. “It’s difficult to pass these increases along to customers, especially when demand is weak,” said one spinner. “But our margins have always been relatively thin, so we don’t really have much choice.”

Average quotations for the base quality of cotton (color 41, leaf 4, staple 34, mike 35-36 and 43-49, strength 27.0-28.9, uniformity 81.0-81.9) in the seven designated markets measured by the USDA averaged 72.26 cents per pound for the week ended January 26. The weekly average was up from 70.92 cents the previous week and 60.47 cents reported during the corresponding period a year ago. Daily average quotations ranged from a low of 71.46 cents Friday, January 20, to a high of 73.02 cents Monday, January 23. Spot transactions reported in the Daily Spot Cotton Quotations for the week ended January 26 totaled 140,546 bales. This compares to 53,781 bales reported the previous week and 60,341 spot transactions reported during the corresponding week a year ago. ICE March settlement prices ended the week at 74.19 cents, compared to 72.69 cents for the previous week. 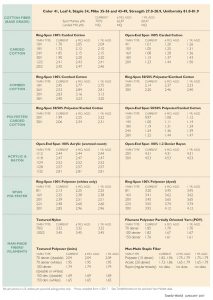