“Lackluster.” That is how one spinner characterizes the continued sluggishness of business through the end of July. “We’re getting business, staying busy, but it is week to week.”

Added another spinner: “We are getting small orders that need very quick turnaround, but, compared to this time last year, we have very little backlog.”

Orders for yarn through the first seven months of the year have fallen well below the expectations of many spinners. “In the first part of the year, I think most of us thought a slowdown was the result of inventory adjustment,” said one spinner. “We knew that at the end of year, a lot of customers had a more yarn on hand that they needed. We were expecting that situation and believed that orders would return to normal once the inventory correction was over, so we weren’t too concerned. However, now it is months later and things have not appreciably changed.”

The feeling of one spinner is that the volatility of the current U.S. Presidential campaign has created an atmosphere of fear and uncertainty among consumers and businesses alike. “A lot of people are concerned about who is going to be the next President and how it is going to affect the economy and the relationship of our country with the rest of the world. Many people are not happy with either candidate, and they are just adopting a wait-and-see attitude.”

Another spinner agreed: “There are a lot of variables that could change the whole sales picture for the remainder of the year. Election years always make me nervous, because you never know what to expect from people. Will they like what they hear and be confident about the future? Or will the scare tactics of some politicians make them close their purses until they are more secure about the direction of the economy?”

Another reason cited by an industry observer cites consumer confidence as a reason for reduced spending on textiles and apparel. “It is not that consumers are saving money; it is just the opposite. After a steady and consistent recovery from the recession, Americans are now actually spending money again on big-ticket items. Those dollars that last year were going to clothes, sheets, towels and such are now going to automobiles, home improvements, appliances, luxury vacations and things along those lines.”

An industry executive noted that a considerable difference in the business climate today, as opposed to five years ago, is that the position of the industry in the marketplace is now much more robust. “In the past, it was always either boom or bust. We were either running flat out or closing plants. Today, that is not happening. There is enough business to go around. Our complaint isn’t that business is terrible. It isn’t. It just isn’t as good as it was last year.” 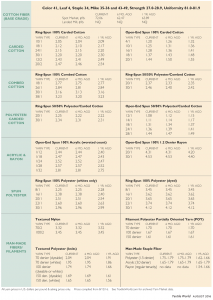 400: Transforming The Global Fashion Supply Chain To Save Forests, Fast