Business continues to be slower than anticipated for many spinners. Backlogs have disappeared, and most orders are on a day-by-day basis.

“We’ve been steady in our ring-spinning business, but not spectacular,” said one North Carolina spinner. “A few months ago, it seemed like we had people lined up outside the door waiting to get orders in. Now we are having to chase them down. It’s not that were not getting business, it is just coming in much smaller lots that in the past year or so.”

Added another spinner: “A lot of the knitters aren’t running full out, as they were for most of last year, so the frequency and volume of orders have decreased substantially. It would be a stretch to say our business is bad, because it isn’t. It just isn’t nearly as good as it has been.”

Said a specialty spinner: “We’re busy, but our pipeline is a lot shorter than we would like. Our customers and retailers are limiting orders to just what they need for right now.” Another said: “We’re running two-to-three weeks out and we’re keeping the pipeline full, but we don’t see any longevity beyond that time period. Ideally, we would like to have a six-to-eight-week order backlog and run a three-week delivery schedule.”

As business has become less robust, a renewed sense of urgency exists regarding on-time delivery. “For our products, we’ve got to be able to turn them in a two-to-three-week period, if not shorter,” said one specialty spinner. “That’s why we continue to get the business we do. But it would be nice to have new program orders coming in like we have had the past few years.”

Overall, business conditions over the past 36 months have resulted in a period of stability unprecedented in recent decades. “I don’t think there is much to this downturn,” said one yarn broker. “It is nothing like what has happened in the past where we had big booms followed by even-bigger busts. Right now, I think we are just in the middle of a period of correction.”

Another spinner agreed: “Yarn, and ring-spun yarn in particular, has been in such short supply for a long period that a lot of customers bought a lot more than they needed just so they could keep their positions. Now, that apparel and other products are not moving off the shelves as quickly as anticipated, the mills have slowed down their production a bit. Many, I’m sure, still have a large yarn inventory from last year. Once those stocks are depleted, I think you will see business return to its former levels.”

Yarn pricing for customers has remained relatively stable for the first part of the year, which is a positive for both manufacturer and customer. “We have been able to hold our prices at roughly the same level for number of months, with only minor adjustments here and there to account for the price of raw material. This enables our customers to have a degree of confidence that the yarn they buy today will still retain its market value when the final product is delivered. And it enables us to have some future picture of our revenue stream, which provides more confidence in reinvesting profits back into the business.”

Another spinner said, “We’re close to where we were since the beginning of the year. It’s been pretty stable. We’ve had a few minor fluctuations in cost, but it really hasn’t affected prices.”

Compared to just a few months ago, most spinners interviewed were considerably more cautious about the state of the market going forward than they were a few months ago. “We really were blind-sided when business began to slow down in January,” said one spinner. It wasn’t at all what we expected. Going forward, I think you will see a return to more favorable conditions. But I am not as certain about this as I was in, say, November of last year. I think the worst, barring something totally unexpected, is that we will maintain our present state, which is not good by any means. But it’s not that bad, either.” 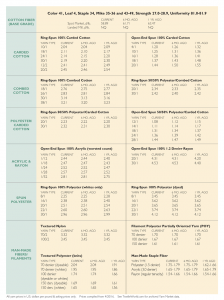