For many years, the predominant question among many industry observers was not whether the U.S. textile industry would cease to be relevant, but when.

During the latter part of the 20th century — when at times it seemed easier to name the textile facilities that remained open, instead of listing all that had closed — it appeared that those observers had been correct and that textiles would follow the shoe industry and all but disappear from the American landscape.

However, by the beginning of the Millennium, a number of factors combined to radically alter the position of the industry and change the future outlook. Among these were the reduction in domestic capacity that more closely aligned production capability with overall demand, a renewed commitment to customer service and quick delivery and a more determined and aggressive global strategy.

By the beginning of the 2010s, for the first time in decades, the U.S. industry began to grow. New plants were announced, and the industry moved to once again add capacity in the wake of a significant uptick in demand for American-made yarn and fabrics.

Another step in that direct was taken in mid-April, with the groundbreaking by Meridian Specialty Yarn Group for a new, multi-million-dollar facility in Valdese, N.C. When completed, the plant with increase Meridian’s operations in Valdese by 113,000 square feet. The plant will augment existing capabilities in package dyeing, space dyeing and top dyeing. As well, the plant will manufacture tow-dyed acrylic for vertical integration with the company’s Ranlo, N.C., plant.

Meridian’s announcement is just the latest in a series that promises to once again significantly expand the presence of the industry — and particularly yarn spinners — in the southeastern United States. Over the past several years, companies in Brazil, Canada, China, Dubai, Great Britain, India, Israel, Japan, Korea, Mexico and Switzerland, as well as in the United States, announced plans to open or expand textile plants in Georgia, Louisiana, North Carolina, South Carolina, Tennessee and Virginia.

Spinners and industry insiders attributed the new era of growth to multiple factors. First and foremost is innovation. “Nothing captures the market’s attention quite like a product that fills a previously unmet need. “It’s important that we keep looking at the market and see where we can establish a competitive edge,” said one specialty spinner. “We look to try to make products that no one else can or will.”

Further contributing to the industry’s success is a renewed focus on core competencies and greater willingness to partner with others. “Spinners have to decide what businesses they can be in and, especially, what businesses they shouldn’t be in,” said one spinner. “Just because you’ve always run a dyehouse doesn’t mean that dyeing your own yarn is the most efficient way to do it. Perhaps there’s a partner that can do it better and cheaper.”

Also, many spinners are now adopting aggressive global strategies. “Many of our old customers, the one we grew this business around, have closed up shop,” said one spinner. “It was either look for new markets or close our doors, too.”

As exports become an increasingly significant share of spinners’ business, lead time and quality are key to gaining this business. “Lead time is often the most important thing — more important in some instances than price,” a specialty ring spinner said. Said another: “We’re never going to win on price, but we can often compete when lead times are critical. As spinners, we have to be able to process and turnaround orders faster than ever before. Quality and speed to market — those are the only two real differentiators these days unless you have a truly unique product. Fortunately, those are things we excel at.”

The ICE May settlement prices ended the week of April 14 at 60.64 cents, compared to 59.03 cents the previous week. 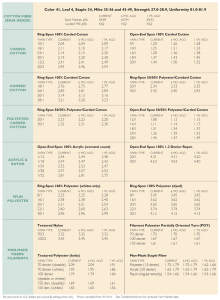 Click to view current yarn prices as a pdf