C
otton spinners’ reaction to the Caribbean Basin (CBI) and China trade initiatives are
mixed, although there seems to be a more positive consensus with CBI.

Spinners feel that trade with countries in the Caribbean will at least result in an increase
in domestic yarn sales. China trade, on the other hand, has a diverse reaction, but mostly
negative.

Most spinners feel that past experience with the Chinese shows them to be dishonest and
self-serving in negotiations and agreements.

Interestingly enough, not one spinner had anything to say about human rights in China. Shows
the difference in thinking between politicians and people in business.

Concerning the Caribbean, one spinner said, “We currently have business requests for as far
out as the third quarter of 2001. This is mostly for ring-spun yarns and customers who don’t want
to be caught short when CBI goes into effect. They will, of course, need domestic yarns to take
advantage of CBI.”

At the same time, spinners are reluctant to quote too far out because of the uncertainties in
future pricing. They are expecting an increase in pricing primarily due to the increasing demand
for yarns.

Another spinner who feels this initiative will be beneficial said, “CBI will help the overall
scenario in yarn markets. It will result in more demand for ring-spun yarns, which at present are
very tight. This may be a good thing because the demand for open-end yarns may improve.”

Synthetic spinners feel CBI will be good for domestic polyester markets and will give them the
chance to regain a place in the world markets (lost to Asian producers). One such spinner said, “
Given the chance, we will prove we are competitive.”

Texturizers also feel the CBI will have a positive effect on their business, but they cannot
predict the extent to which they will be able to participate.

As for China, one spinner observed, “Products from China may be cheap, but they are a long
way from our markets. In spite of what we hear from the industry, the sky is not falling, and I
personally am not really concerned.

“We can’t put our head in the sand. We must compete on a global basis. Our company will
thrive in this business.”

Yet another spinner feels that trade with China is a mistake because of the distance they are
from our markets and from our general business ethics.

Texturizers, like cotton spinners, have mixed feelings about trade with China, but most feel
that the business effect will be negative. A synthetic spinner summed up the whole situation
concerning China in one word — “scary.” He also said, “China must develop a lot before they will
become consumers.”

Free trade has the potential to be a great thing, but everyone must play by the rules. The
consensus is — it is, but they won’t.

Spinners report that current ring-spun markets for both carded and combed yarns is exceptionally
good. One spinner said, “I have nothing to sell until after the third quarter. Also, the market has
firmed up on pricing.” Another spinner reported that his company had increased prices on ring-spun
yarns by five cents per pound.

Open-end yarns, reported as steady, are still in a dog-eat-dog situation, according to
spinners. Oversupply of yarn resulting in low pricing is the problem.

One spinner says that the fourth quarter will be the turning point for OE yarns. “In
December, the new crop cotton prices will help determine OE yarn pricing and hopefully get more
realistic.” If CBI causes a major increase in demand for this type of yarn, the pricing may well
turn upward.

Markets for textured yarns are pretty good, but August is the normal seasonal slowdown for
these yarns. Markets have been so good that inventories have been sold off, so production for a
portion of this period will be used to rebuild them. Beyond that, there is some uncertainty, but
texturizers feel markets will hold up.

Synthetic spinners say, “Markets are inconsistent. There is no long-term business. Both
demand and pricing are better for the long staple markets. Short staple is inconsistent in both
areas, but at least the trend is up.”

One important fact to remember in this business of global competition is that if you plan to
be a player who thrives, you must be ready to compete, like the spinner noted earlier in the Yarn
Market. 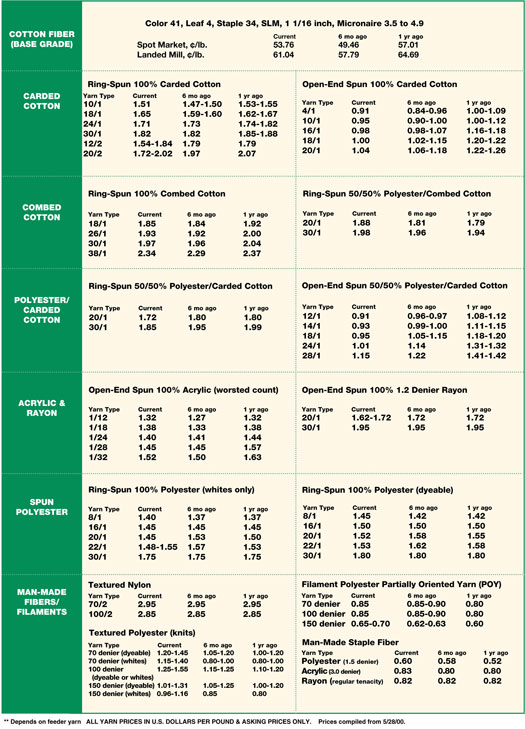