This is the third installment of a four-part series of papers stemming from a research
project conducted by B.J. Hamilton to analyze the competitiveness of the U.S. textile industry.
Earlier parts of this series have reported trends in fiber and yarn costs followed by the costs of
yarn production in the United States when compared to global competitors. This and the subsequent
part will investigate whether the demonstrated cost advantage of U.S.-produced yarn can be carried
through to afford economic advantages in fabric production.

Figure 2 shows an even more extreme accumulation of large circular knitting machines by
China, with more than 130,000 cumulative shipments between 2000 and 2010. No other country exceeded
20,000 over that time frame. 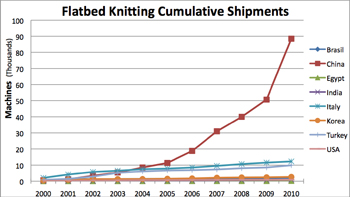 Click
here to view Figure 1 in a new window 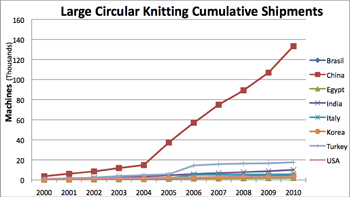 Click
here to view Figure 2 in a new window


Figures 3 and 4 show the trends of knitting cost, including input cost (yarn) in each of the
included countries from 2003 to 2010. The U.S. is shown in a bold red line to emphasize its place
among competition.

Figure 3 shows the U.S. cost lowering from third-lowest to second-lowest over this time
frame and cost in China rising from second-highest to highest. In Figure 3, note that for the cost
of knitting with ring yarn, the steep decline for all countries between 2003 and 2006 is caused by
an adjustment in how the costs were calculated by ITMF. Specifically, a different base knit fabric
was used for the calculations.

Figure 4 clearly shows that over recent years, when using rotor yarns as the raw material,
the cost of producing knitted fabrics in the U.S. has become more competitive. This is mainly due
to the lower rate of increase in cost over time as compared to other countries. 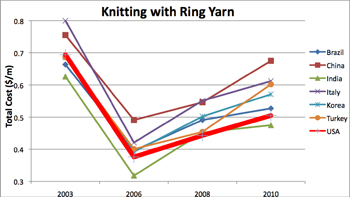 Click
here to view Figure 3 in a new window 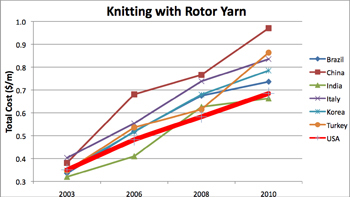 Click
here to view Figure 4 in a new window


It can immediately be recognized that, according to the surveys of the ITMF, raw material
costs are more significant for knitting than for spinning or weaving. The individual cost
components available for each country for knitting in the 2010 ITMF International Production Cost
Comparison report are raw material, interest, depreciation, auxiliary material, power and labor.
Please note that the “raw material” for weaving and knitting processes refers to the costs of
purchasing yarn. It has been previously shown that yarn manufacturing costs are very competitive in
the U.S., and this benefit of locally produced inexpensive, high-quality yarn should impact
knitting costs. For the sake of brevity in this paper, only the results for knitting with ring yarn
are shown below, but knitting with rotor yarn had similar results.

Figure 5 shows the total cost of knitting for each country in 2010, broken into cost
components. A bold red line was placed on the top of the U.S. bar in order to gauge its cost
relative to the other countries.

Figure 6 shows what the total knitting cost for each country would become if the raw
material cost were doubled. As shown in Part 1 of this series, this scenario could easily happen as
the result of an elevation in fiber costs, such as experienced with the cotton price increase in
2010-11. This figure shows the clear advantage gained by the U.S. versus the majority of its
competitors in the face of a large increase in yarn cost. Another factor for which a uniform global
increase might be advantageous to the U.S. is power cost. However, as indicated in Part 2, it may
be unrealistic to expect a uniform increase, and there is growing evidence that the rises in power
costs may be more influenced by regulatory issues, which vary significantly from country to
country. This is a subject of ongoing research. 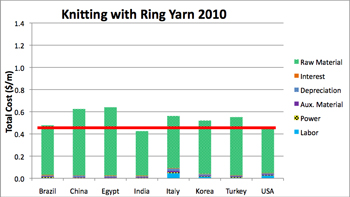 Click
here to view Figure 5 in a new window 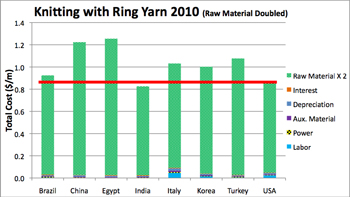 Click
here to view Figure 6 in a new window


This paper shows that the U.S., while losing worldwide share in knitted fabric production,
has been slowly gaining in global cost competitiveness in knitting. Additionally, the cost
structure of U.S. knitting provides the opportunity for the U.S. to benefit from global increases
in fiber prices. The reasons for the advantage being much more applicable to knitting is that there
are very few operations in the conversion of yarns into knitted goods, which require a significant
labor input compared with weaving, which requires warp preparation.