W
ith the breakdown of the Doha Round of trade liberalization negotiations, trade ministers
from developed and developing countries remain committed to getting some kind of an accord, but it
will be a long time in coming. And, if and when it comes about, it will have a new look. When
negotiations were called off in July, the leading participants tried to set a positive tone for
what has to be viewed realistically as a failure. Saying he is not ready to “toss in the towel,”
Pascal Lamy, director-general of the World Trade Organization, said: “I am convinced there will be
a next time. Our immediate priority is to reaffirm our commitment to the multilateral trading
system.”

While the talks broke down over procedures for handling agriculture subsidies and tariffs,
there were major problems in the area of industrial products as well, because the developed and
developing countries were far apart. US textile manufacturers were determined to resist major cuts
in US textile and apparel tariffs, unless and until other countries bring their tariff levels more
in line with those in the United States and also take steps to permit greater access to their
respective markets.

One of the more astute observers of the international trade arena, Eric Autor, vice
president and international trade counsel for the National Retail Federation, said he was
disappointed but not surprised at the outcome of the six years of on-again, off-again negotiations.
While his organization is a strong supporter of more liberalized trade, he believes there are just
too many differences between the major participants for anything to happen in the current climate.
He believes the chances of wrapping up a broad international pact in the next couple of years are
“remote.” He says, however, that there could be some positive developments if countries could
endorse some sectoral agreements.

One such sectoral agreement, which he believes would be tremendously helpful, would be
agreement on simplification and harmonization of customs rules, making them more simple and
uniform. For years, many US manufacturers, including textiles, have complained that customs
regulations in other countries are so complicated that they amount to serious non-tariff barriers
to trade.

Autor says there likely could be emphasis on bilateral and multilateral trade agreements,
but for the time being, any major agreement faces a period of stagnation.

Cass Johnson, president, National Council of Textile Organizations, agrees that a broad
global agreement is out of the question, at least in the current atmosphere, but he believes
negotiations could be successful in certain sectors for what he says would amount to a “mini
round.” Johnson believes some progress can be made in certain areas that would facilitate trade,
including customs reform. He pointed out that it will be more difficult for Congress to go along
with trade agreements because more and more members have become convinced that past liberalized
trade efforts have not created jobs, but in fact have resulted in large numbers of job losses.

US Trade Representative Susan C. Schwab said the United States remains “fully committed to
the mission of the World Trade Organization as the foundation of the rules-based multilateral
trading system and to multilateral negotiations.” That is the Bush adminisration’s commitment, and
it does not amount to much at this stage, as nothing will happen until well into the next
administration in Washington.

For one thing, Congress will have to renew the president’s Trade Negotiating Authority –
fast track – for anything meaningful to happen. That will not take place until a new negotiating
team and a new Congress are in place, and that could take months.

At The Removal Of Chinese Quotas

US textile manufacturers are continuing to press for government actions to help combat what
they see as major problems when the so-called safeguard quotas on 31 sensitive categories of
Chinese textiles and apparel are removed at year’s end – and they may be getting some promising
help from key members of Congress. House Ways and Means Committee Chairman Charles B. Rangel,
D-N.Y., one of the most powerful forces in shaping US international trade policy, says his
committee will take up the issue before Congress adjourns for the year. 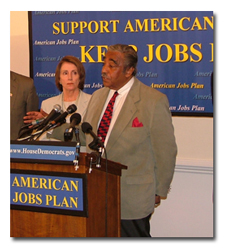 House Ways and Means Committee Chairman Charles B. Rangel speaks in support of a plan to
keep jobs in the United States.

With a simple rollover of the quotas out of the question, industry lobbyists are looking at
a number of options. One would be to have the government’s monitoring program for Vietnamese
textile and apparel imports continued and expanded to cover Chinese imports. If the Commerce
Department finds imports are injuring the US economy, it is committed to initiating an anti-dumping
investigation. That commitment, however, was made by the Bush administration, and no one knows what
will happen with a new administration.

Importers of textiles are strongly opposed to the monitoring program, as they believe it has
had a chilling effect on trade without saving any US jobs. US textile manufacturers and others are
pressing for legislation that would define currency manipulation as an unfair trade practice that
can be taken into consideration in anti-dumping and countervailing duty cases.

On the congressional front, Rangel and Ways and Means Trade Subcommittee Chairman Sander
Levin, D-Mich., have introduced their Trade Enforcement Act of 2008, which will deal with some
textile trade-related issues, particularly enforcement of existing trade agreements and attacking
nontariff barriers to trade. In addition, Rangel said recently his committee will pass legislation
that is specifically focused on the Chinese textile and apparel quota issue.

Another approach the congressional leaders are looking at is employment of so-called Section
421, where an unfair trade practices case can be launched by a firm, trade association or union; or
by a resolution from the House Ways and Means Committee or Senate Finance Committee. If the
International Trade Commission finds grounds for action, a recommendation is sent to the president.
While this is a quick and easy way to get relief from market-disrupting imports, it is dependent on
action by the president. Some non-textile-related Section 421 cases have been proposed to President
George W. Bush, but he has refused to act on them. Therefore, any success with this approach would
be up to the next president and Congress.

GAO Will Look At Formaldehyde In Textiles

Congress has directed the US Government Accountability Office (GAO) to conduct a study to
determine whether formaldehyde in textiles and clothing presents a health risk. The study is part
of an expanded mandate given to the Consumer Products Safety Commission (CPSC) in the wake of last
year’s flap over unsafe toys and other products reaching the US market. There is some uncertainty
surrounding whether formaldehyde in textile products actually is a problem.

Sen. Robert Casey, D-Pa., one of the main sponsors of legislation calling for the study,
thinks there is or could be a problem. He cited a 1997 CPSC report that named a number of adverse
reactions to formaldehyde including burning eyes, chest tightness, skin rashes and other allergic
reactions. He also said formaldehyde has been observed to cause cancer in laboratory animals and
that it “might” in humans.

US textile manufacturers are not particularly concerned about the study, as they have a long
history of working with the CPSC on the formaldehyde issue and have made efforts to control any
problems. It is possible, however, that the study could uncover some problems with imports.